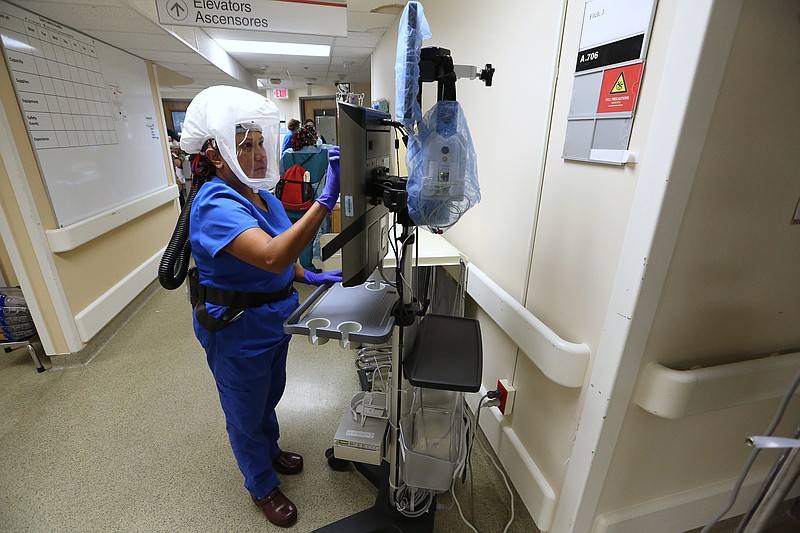 Nurse practitioner Naomi Crume, with the vascular access team, gets her equipment ready in the hallway of one of the Covid wards at University of Arkansas for Medical Science on Thursday, July 22, 2021, in Little Rock. .More photos at www.arkansasonline.com/725covid/.(Arkansas Democrat-Gazette/Thomas Metthe)

A day after falling to its lowest level in more than two months, the number of people reported to be hospitalized with covid-19 in Arkansas rose Tuesday for the first time in more than a week.Reflecting a slowdown in testing and reporting around Labor Day weekend, however, the state's count of cases rose by 429, an increase that was less than a third the size of the one the previous Tuesday.The state's death toll from the virus, as tracked by the Department of Health, rose by three, to 11,936.After falling or staying the same the previous seven days, the number of covid-19 patients in the state's hospitals rose Tuesday by 20, to 281.The number as of Tuesday was still down by 37 compared to its level a week earlier, however.The number of the state's virus patients who were reported to be in intensive care, which had also been at a two-month low on Monday, rose Tuesday by six, to 41.Growing for the second day in a row, the number reported to be on ventilators rose by three, to 12.The increase in cases on Tuesday was down by 87 compared to the one on Monday and by 954 from the one the previous Tuesday.After rising a day earlier, the average daily increase in the state's case count over a rolling seven-day period fell to 842, its lowest level since the week ending June 27.Dropping for the third day in a row, the number of cases in the state that were considered to be active fell by 725, to 10,985, its lowest level in just over a week, as recoveries outpaced new cases.