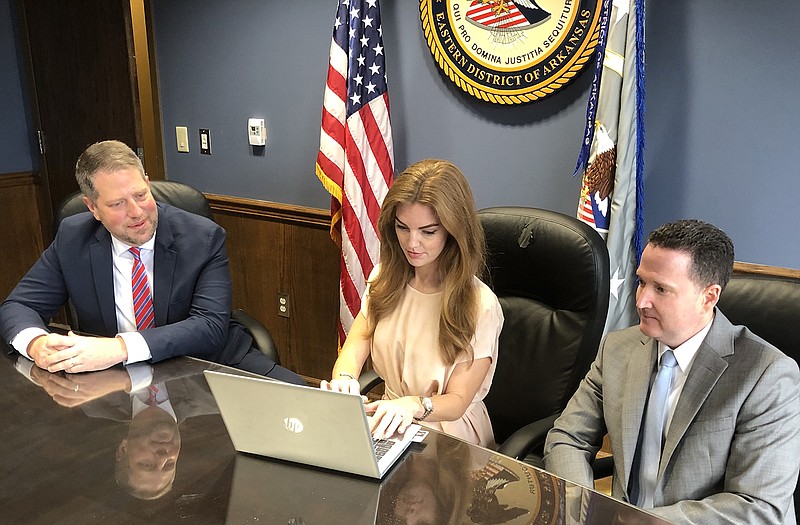 The Little Rock area has long had a reputation for violent crime, dating back to the mid-90s following release of an HBO documentary, "Gang War: Bangin' in Little Rock," that spotlighted drug-and-gang-fueled violence that plagued the city due to tensions between rival street gangs battling one another over reprisals and territorial disputes.

That documentary cast an unwelcome spotlight on the capital city -- which in 1992 had a record 71 homicides, according to Little Rock Police Department statistics -- that civic leaders have been battling to overcome ever since. But the documentary did result in a large increase in personnel for the Little Rock Police Department that made significant inroads in eradicating the gang problem for a time after prosecutions sent many of the participants to prison.

Although the gang violence ebbed for a time, Little Rock has once again found itself cast in an unfavorable light following an uptick in violent crime, punctuated by 17 shootings in the Little Rock area over the Aug. 12-14 weekend that left three people dead and three more injured.

In 2020, the latest year for which FBI statistics are available, Little Rock had 55 homicides. Although other comparably sized cities in the region experienced more homicides that year -- 110 in Jackson, Miss., 102 in Baton Rouge, and 69 in Shreveport -- Little Rock eclipsed each of the three cities in overall violent crime reports that year with 3,657 reports, compared to 1,614 in Jackson, 2,087 in Baton Rouge, and 1,713 in Shreveport, according to FBI statistics.

Michael Gibbons, a homicide detective with the North Little Rock Police Department who also serves as a task force officer with the local Bureau of Alcohol, Tobacco, Firearms and Explosives (ATF) field office, said even though the numbers of violent crimes in Central Arkansas remain stubbornly high, the emphasis on taking violent armed offenders off the streets does provide some relief to many neighborhoods. One impediment to those efforts, he said, is the changing nature of the violence.

Instead of joining larger, more organized street gangs such as those affiliated with the Crips or the Bloods, Gibbons said, many of the most troublesome offenders are younger and more likely to belong to small gangs organized around rap music.

"Rap music has glorified gun possession and gun use," he said. "It's in every song now. That's where gangs have gone, they've gone from Bloods and Crips to neighborhoods, then to blocks, and now it's rap group gangs ... There's no godfather anymore. It's down to rap groups."

When members of rival groups encounter one another," Gibbons said, shootouts are often the result regardless of the location or who might be caught in the crossfire.

Even so, Gibbons said, vigorous prosecution efforts do take some of the worst offenders off the street, which he said provides relief for a time.

"It's amazing how the shootings drop in certain neighborhoods when we take certain people off the streets," Gibbons said.

Assistant U.S. Attorney Michael Gordon, the criminal chief for the office of the U.S. Attorney in Little Rock, is responsible for evaluating and assigning cases. He said all gun cases referred to the office have to be evaluated to determine if federal prosecution is warranted, with the level of violence factoring heavily in the equation.

"If it is, we find a place to put it ... We don't take every case that's referred to us. We can't," he said. "But shooters get top priority every single time."

Lauren Eldridge, a special assistant U.S. attorney hired last year through a federal Project Safe Neighborhoods grant to prosecute violent crimes, said special attention is paid to the more violent offenders, those who have used or who are suspected of using firearms in the past.

"One thing we focus on is history," Eldridge said. "We will prioritize those with a long history of violent conduct."

Clayton Merrill, resident agent in charge of the local ATF field office in Little Rock, said enforcement efforts there are focused on identifying and arresting violent offenders, with a particular emphasis on those involved in shootings.

The U.S. attorney's office focus on gun crime ramped up in 2018 under former U.S. Attorney Cody Hiland to combat the resurgence of violent crime in Central Arkansas.

At that time, federal penalties were more severe than the state could bring to bear, in large part because of the federal requirement that inmates serve a minimum of 85% of their sentence before being considered for "good time" early release for good behavior. That policy typically resulted in longer prison sentences at the federal level, where penalties for gun possession cases range from 10 years to life in prison, depending upon the underlying relevant conduct of each defendant. For years, by contrast, many state convictions resulted in offenders' spending only a fraction of their sentences in custody before being paroled.

Last year the Arkansas General Assembly passed Act 946 of 2021 -- which prohibits parole for offenders with previous violent crime convictions -- to address those disparities.

U.S. Attorney Jonathan Ross said his office has recently seen a drop in cases referred by local authorities -- an indication, he said, that the new law is working.

"Our state and local partners are referring less cases to us because they have that tool available to them," Ross said. "We've been helping the state while it's been basically walking around with one arm tied behind its back, and now they've got greater resources to deploy."

Larry Jegley, the 6th Judicial District prosecuting attorney for Pulaski and Perry counties, said since the law was implemented it has resulted in more prosecutions at the state level. He said the decision to prosecute or refer such cases still depends, however, on the individual circumstances underlying each case.

"We still try to look at gun cases and see where we can get the most bang for the buck, so to speak, in either state or federal court," Jegley said. "The law gives us the ability to do what we previously couldn't do, which is to get more prison time than the feds could do."

But while prosecutors may see benefits to the policy of prioritizing gun possession cases, some defense attorneys voiced concerns about the volume of cases.

Michael Kaiser, a local defense attorney who practices in both state and federal courts, said he's concerned about how the federal prosecutions are applied as priorities shift, as well as the overall effectiveness of the prosecutions.

He characterized the prosecutions as a way to "mop things up on the back end to make it appear that we're preventing things," and said focusing exclusively on violent offenders would be the most effective way to conduct the prosecutions.

"That would seem to be the best way to use federal power," Kaiser said, "if you're actually trying to stop violent crime, but just a guy having a gun on a traffic stop, that's the majority of my federal gun cases."

Defense attorney Blake Hendrix of Little Rock said he also has concerns about the numbers of prosecutions but acknowledged the problem of violence has been pervasive for years.

"In my career I've seen it ebb and flow, like the crack days," he said. "In the '90s we were overloaded with crack and gun cases. Then there's meth, then heroin's coming back and now it's guns, guns, guns."

Hendrix said not all of the defendants chosen for federal prosecution are violent. To illustrate, Hendrix related the case of one client he said is being federally prosecuted due to prior convictions for theft of scrap metal, criminal mischief, theft of property, and possession of firearms by certain persons and is facing a possible 10-year sentence.

"There's no violence in this guy's past," Hendrix said. "I'm not really sure why ... if the emphasis is on violent people, because this kid's not. He may have just gotten sucked up in a big vacuum or maybe their policy is broader than we think it is."

Assistant U.S. Attorney Allison Bragg said that although the emphasis currently is on violent felons, the office did initially seek indictments for a wider range of gun cases that didn't involve past violent acts and, at its discretion, can do so again.

"If you look really hard y0u'll find some like that in the past," Bragg said. "I've prosecuted that kind of case before, but right now, especially with the rash of violence and higher-priority defendants, I don't want to create the perception of, oh we would never if he had a forgery from 20 years ago. I've prosecuted a guy who had a 20-year-old forgery conviction and a gun in the console, probably in 2018 because we were prosecuting every single gun case that we could.