TELEVISION: ‘Lord of the Rings’ prequel hopes to slay dragons 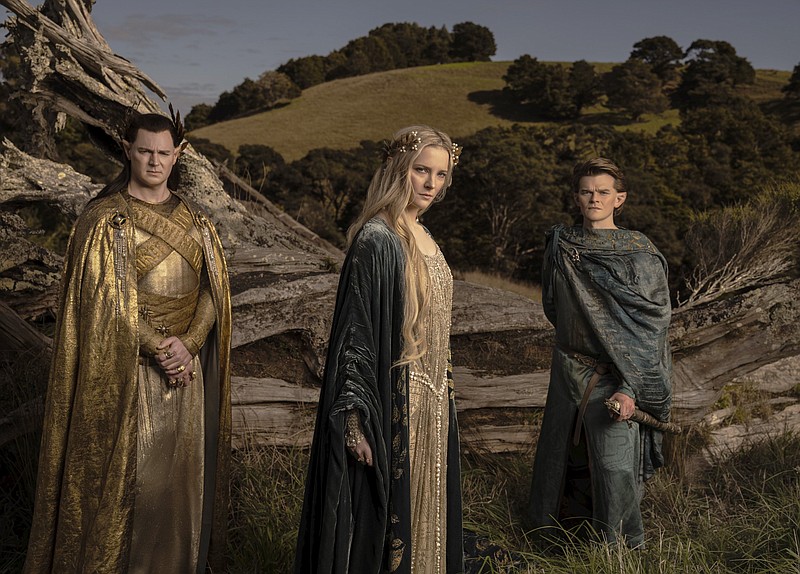 Benjamin Walker (from left), Morfydd Clark and Robert Aramayo are among the big cast of “The Lord of the Rings: The Rings of Power,” now streaming on Amazon Prime. (Amazon Studios via AP)

NEW YORK — The return of dragons on the small screen has been a huge hit. Now the elves and dwarves are back as well.

Amazon Studios has launched "The Lord of the Rings: The Rings of Power," an ambitious, years-in-the-making and very expensive salvo that will go head-to-head with another costly streaming fantasy epic: HBO's "Game of Thrones" spinoff "House of the Dragon," which recently became the most-watched series premiere in HBO history.

The series is based on J.R.R. Tolkien's writings and asides about Middle-earth's Second Age, which preceded the Third Age's "Lord of the Rings" and "Hobbit" films and books. Tolkien's grandson, Simon Tolkien, was a creative consultant.

"We say Tolkien sort of left a series of stars in the sky. Our job was to connect the dots and form the constellation and then sort of draw in between the constellations to give a little more specificity to it," said J.D. Payne, a showrunner and executive producer.

The hourlong episodes are stuffed with action and humor but buckle up: Payne and his co-showrunner Patrick McKay plan to use a 50-hour canvas to explore their nuanced characters and complex histories.

Early ones shift across the various regions of Middle-earth, our planet's imagined mythological past. Here, some 4,000 years before "The Hobbit," are elves involved with royal intrigue, dwarves who mine inside mountains, hobbitlike harfoots who are pastoral, humans who seem unusually prone to violence, and evil orcs.

Despite being set centuries before the books and films that make up the Tolkien's canon, fans of "The Lord of the Rings" will notice some familiar characters, based on the long lifespan of some of the creatures, including Galadriel, Elrond and Isildur. Sauron, the evil force, is unseen in the first two episodes but a malevolent presence throughout.

Morfydd Clark grew up in Wales to parents who adored Tolkien's epic book series and her dad read her "The Hobbit" when she was 9. The films came out when she was 11, accelerating the obsession. Now she finds herself playing a young Galadriel, a powerful elf played later in the films by Cate Blanchett.

"I think there's a lot of hope in Tolkien's world, and with hope comes bravery to stand up and have courage for what you think is valuable," she said. "The world needs to be safe enough for the smallest and most vulnerable."

That sense of hope is something that distinguishes the series from "House of the Dragon," which revels in a cynical, bloody view of mankind.

The show's tone shifts depending on which place is being visited. Harfoots, who have Irish accents, are whimsical, communal and clever, while dwarves have Scottish accents, are fond of a drink and are a little rough. Elves are elegant and elite, with upper English class accents and a fondness for billowing cloaks and long, elaborate ceremonies.

The cast — a massive ensemble of 22 actors — is multiethnic and composed of actors of different ages and fame, from Tony-nominated Benjamin Walker to up-and-coming Charlie Vickers, who graduated from drama school in 2017.

"It's a very heterogeneous world and if it wasn't, we'd be dealing with dystopia," said Trystan Gravelle, who plays a royal adviser in an Atlantis-like kingdom.

The cast filmed in New Zealand during the pandemic and were away from loved ones for almost two years. The actors rarely visited the sets of rival fictional races, but all gathered for potluck lunches and holidays, often at Walker's house where a mean fried chicken was served.

"What that did is it sort of forced us to to lean on each other and that is a bonding experience like no other," said Nazanin Boniadi, who plays a human healer and single mother. "That fellowship that you see on screen was forged very much behind the scenes."

The production — rated TV-14 for violence versus the "Game of Thrones" prequel which is TV-MA for violence, language, and nudity — is one of the most expensive in history, with Amazon spending at least $465 million on the first season in New Zealand, where the series employed 1,200 people directly and another 700 indirectly. In total, the season has reportedly cost $1 billion.

The new series debuts in the long shadow left by Peter Jackson, whose film trilogy adaptation of Tolkien's books won critical and commercial praise in the early 2000s and claimed the best picture Oscar for "Return of the King." For the series, there was more freedom to create as long as it was true to the author.