The state of Americana: In Tennessee, AmericanaFest will showcase the rich musical legacy of Arkansas 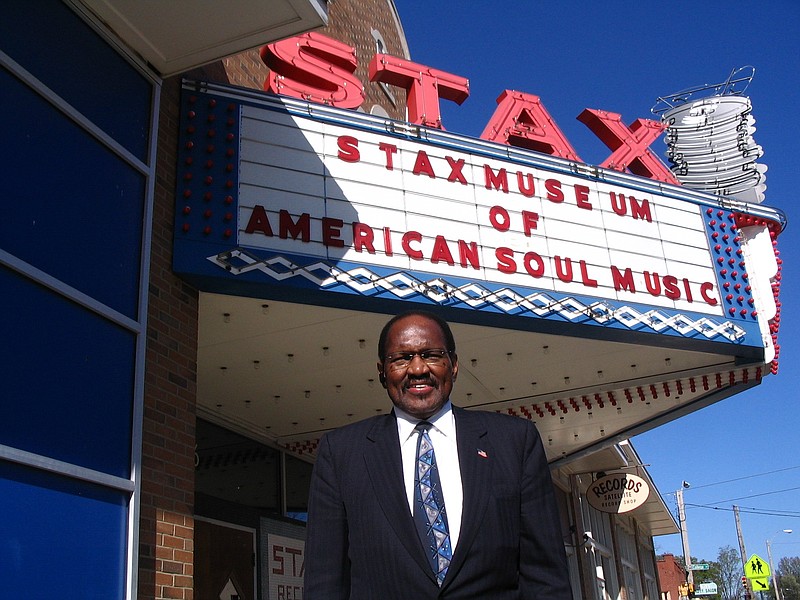 Former Stax Records owner and Chief Executive Officer Al Bell stands in front of the label’s marquee in Memphis. Bell, a native of Brinkley, will speak during “Wattstax Now And Then: Celebrating 50 Years of Wattstax and Americana Music by Black Artists,” a Sept. 14 panel at AmericanaFest in Nashville, Tenn. (Special to the Democrat-Gazette/Reed Bunzel)

The term Americana, at least when applied to music, is somewhat amorphous. It's specific, but also quite broad; it's one thing made up of all these other things, which is kind of like America itself.

What do we hear when we hear music labeled Americana? Well, it's music derived from all or parts of other music — country, folk, bluegrass, rock 'n' roll, blues, R&B, maybe even a little jazz and gospel.

The Merriam-Webster Dictionary actually has a more streamlined definition: "A genre of American music having roots in early folk and country music."

And when it comes to Americana music, Arkansas is kind of a big deal. Several of the genre's foundational artists — Sister Rosetta Tharpe, Johnny Cash, Levon Helm, Ronnie Hawkins, to name a few — are from here.

That's why Arkansas is being showcased during the 22nd Annual AmericanaFest music festival and conference in Nashville, Tenn., presented Sept. 13-17 by the Americana Music Association.

Joining them will be a delegation of musicians and others from Arkansas who will perform at showcases and speak at panels, spreading the gospel of the Natural State's roots-music legacy. It's a chance to shine a light on Arkansas and attract tourists, fans and musicians to a place that has had a significant impact on American culture.

"We took a look at Arkansas and realized that there are a lot of legacy artists that fed the Americana genre that came from there," says Danna Strong, producer of the festival's conferences, seminars and panels.

Greg Spradlin, the guitar wizard and singer-songwriter whose latest album is 2020's "Hi-Watter," has been working with the Americana Music Association, Arkansas Tourism and others to highlight the state at the festival. It's something that's been in the works since 2020 and, after delays caused by the pandemic, is finally coming to fruition. 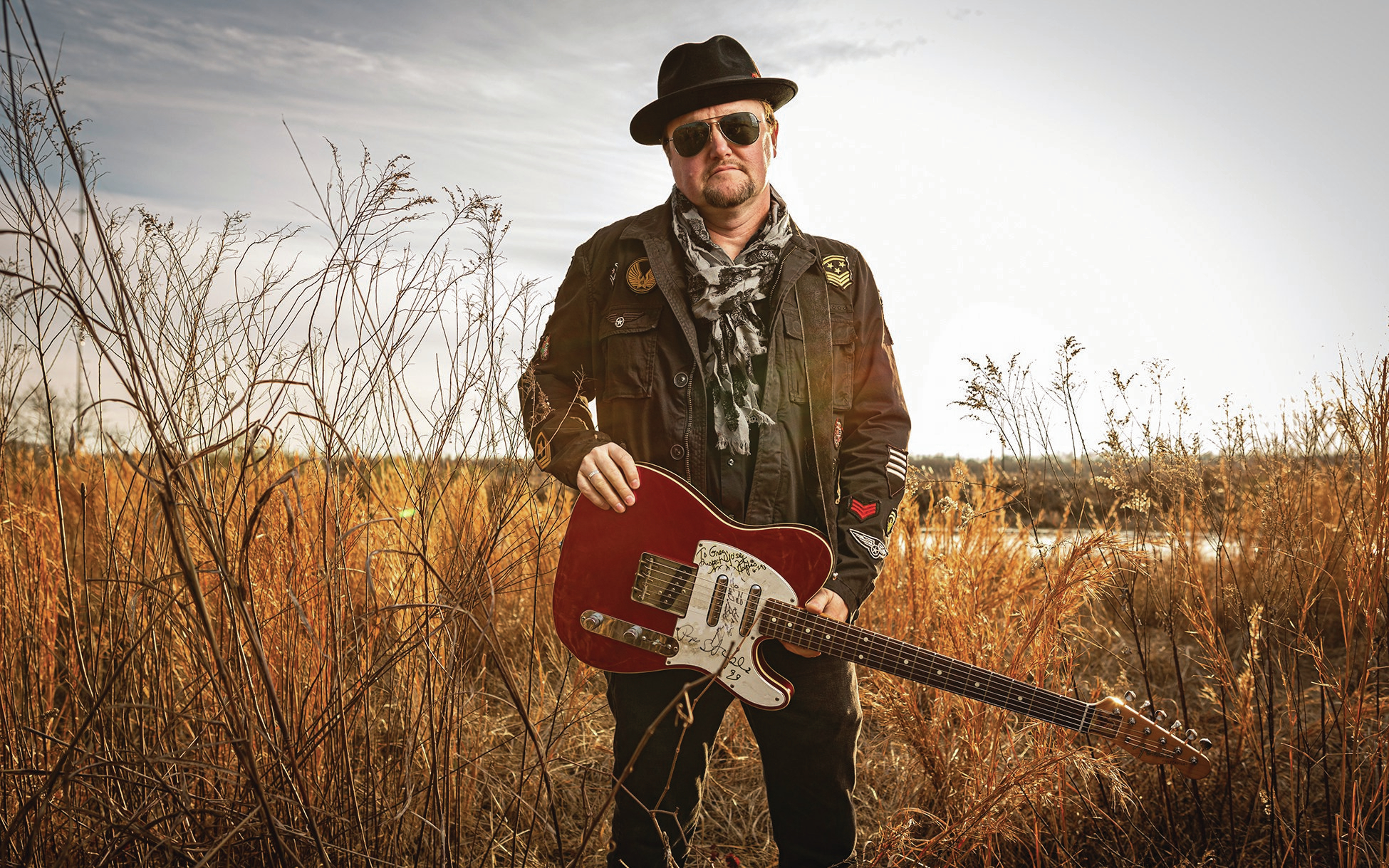 Pangburn native Greg Spradlin will perform and host a panel at the 22nd Annual AmericanaFest in Nashville, Tenn. The musical legacy of Arkansas is being spotlighted at the festival and conference. (Special to the Democrat-Gazette/Rett Peek)  "We need to put our flag in the ground and announce who we know we are and the importance we have," says Spradlin, who grew up in Pangburn and now lives in Little Rock. "AmericanaFest is such a great opportunity for Arkansas to be recognized. Music people know about [Arkansas' musical legacy], now it's time to show the rest of the world."

One Arkansas music executive whose career helped take Southern R&B worldwide will speak about the concert he organized that became known as the "Black Woodstock."

Al Bell, the Brinkley native, former chief executive officer and owner of Stax Records and former president of Motown Records Group, will be part of a panel titled "Wattstax Now And Then: Celebrating 50 Years of Wattstax and Americana Music by Black Artists." The discussion will address the Wattstax festival, which took place Aug. 20, 1972, in front of a crowd of about 112,000 people at Los Angeles Memorial Coliseum and featured Stax artists Isaac Hayes, the Staple Singers, Rufus Thomas, Albert King, the Bar-Kays and more. The seven-hour-long concert was a benefit to commemorate the seventh anniversary of riots in the Watts community of Los Angeles.

"The music we presented that day, we call it soul music but it's a mixture of country and gospel and blues and a bit of classical," Bell says. "It's the music that comes out of the lives and culture of the African-American people. It reflects and influences what's going on in their lives. It's real music and real art because it comes from our culture. That's what was happening that day, we were celebrating a part of our culture."

Besides his accomplishments as a record executive, Bell also wrote "I'll Take You There," which the Staples Singers took to No. 1 on the Billboard R&B chart. He's a member of the Arkansas Black Hall of Fame and in 2011 was given the Grammy Trustees Award. The Americana Music Association is honoring him at AmericanaFest with a Lifetime Achievement Award.

"It blew me away when they said they were giving me this award and at the same time they were recognizing our state," says Bell, who is now CEO of Al Bell Present, LLC. "I've been fighting since 1958 for the recognition of the state of Arkansas and its music heritage."

"Al Bell is one of our mentors," says musician-filmmaker Troy Campbell of The House of Songs, a space for songwriters in Bentonville that is hosting a pair of parties during AmericanaFest. "I'm looking at a picture of him right now, and we named one of the rooms here after him. I've learned a lot from him."

Stephen Koch, host of the long-running radio program "Arkansongs," says Bell is "like a lot of Arkansawyers, someone who was behind the scenes. He was pivotal in what he was able to do, largely in R&B. He also worked with Dr. Martin Luther King's Southern Christian Leadership Conference and campaigned for civil rights, which dovetailed into Wattstax." 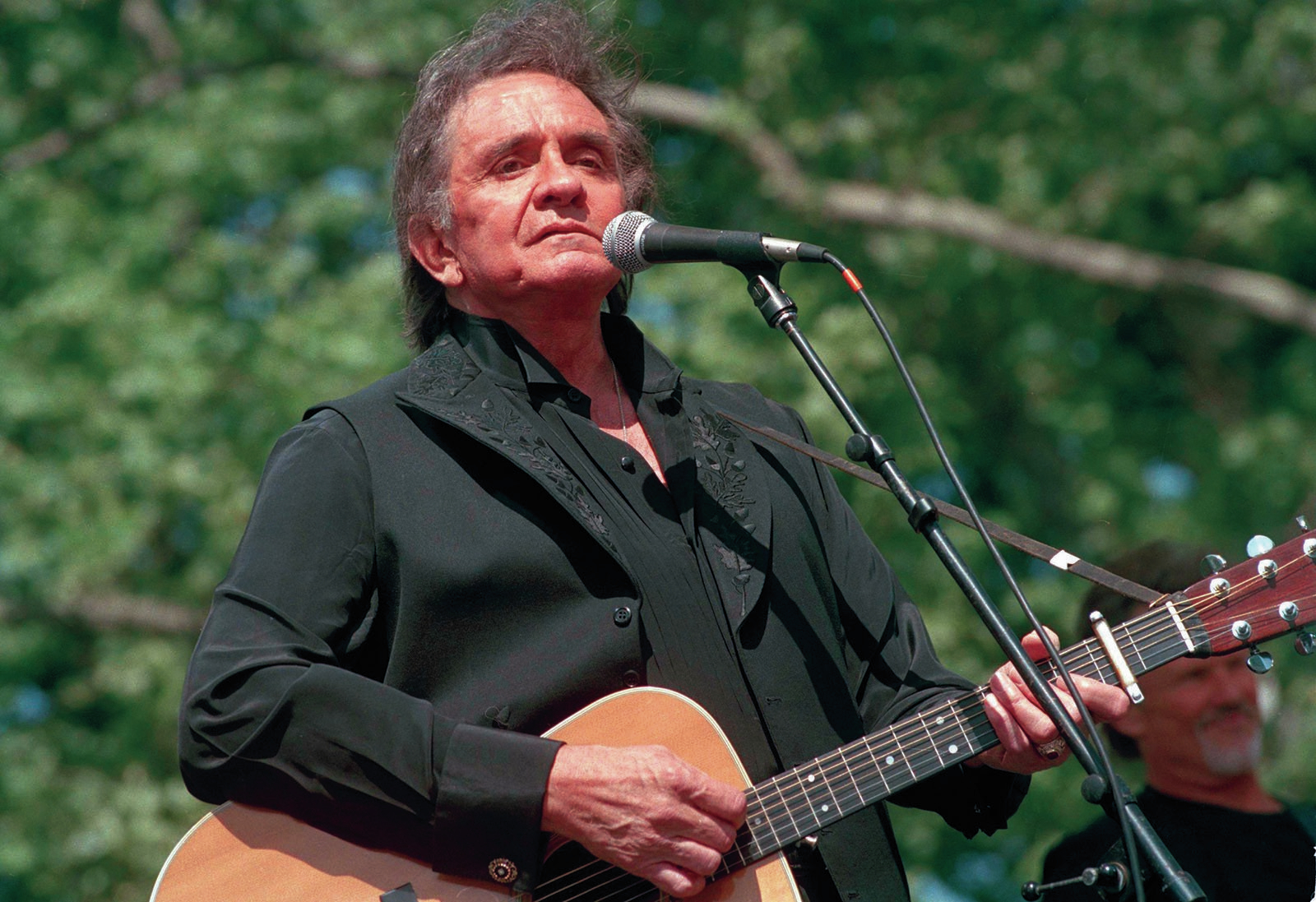 Kingsland native Johnny Cash performs at a benefit concert at Central Park in New York in this 1993 file photo. Robert Burke Warren will lead a panel, “Johnny Cash: An Arkansas Icon Endures,” at the AmericanaFest in Nashville. (AP Photo/Joe Tabacca, File)  Arkansas is the birthplace of two of Americana's patron saints — Johnny Cash and Levon Helm. Cash, who died Sept. 12, 2003, was a native of Kingsland and grew up in Dyess. He recorded his early rockabilly hits at Sun Records in Memphis before crossing over to country music. Cash also recorded gospel and folk songs and his refusal to be pigeonholed artistically made him a pivotal influence on generations of country and rock musicians.

Drummer and singer Helm, who grew up in Phillips County, was a member of The Hawks, the backing band for fellow Arkie Ronnie Hawkins. The Hawks left Hawkins and in 1967 became The Band, whose music embodied what would become known as Americana and would leave admirers like George Harrison and Eric Clapton awed. In 2010, Helm's solo album "Electric Dirt" was the first to win a Grammy for the newly created best Americana album category.

Cash and his career will be discussed as musician and writer Robert Burke Warren leads the panel "Johnny Cash: An Arkansas Icon Endures," while the musical legacy of Sonny Boy Williamson, Conway Twitty, Helm and others will be the subject of "Arkansas' Delta Roots," a discussion guided by music industry veteran Sharon Corbitt featuring bluesman Larry McCray and Munnie Jordan of the King Biscuit Blues Festival.

Helm, who died April 19, 2012, will be honored during a tribute concert featuring a band made up of Spradlin, Montgomery, Weinheimer and others from Arkansas. They will be joined by Lee Roy Parnell, Steve Cropper, Larry Campbell, Webb Wilder, Allison Moorer and her husband, Hayes Carll, just to name a few.

"That Levon Helm tribute has taken on a life of its own," Spradlin says.

In talking about his preparations for the show, Weinheimer pinpoints why The Band has become one of Americana's mainstays.

"I'm doing a deep-dive into them right now, and it's incredible how many influences they pulled from to create what they did."

The House of Songs will present the "Arkansas Extravaganza," which will showcase Arkansas musicians, and the "Arkansas Explorer Day Party" with performers from Arkansas and beyond. Both events are held in partnership with Visit Bentonville and Arkansas Tourism, a division of the Arkansas Department of Parks, Heritage and Tourism. 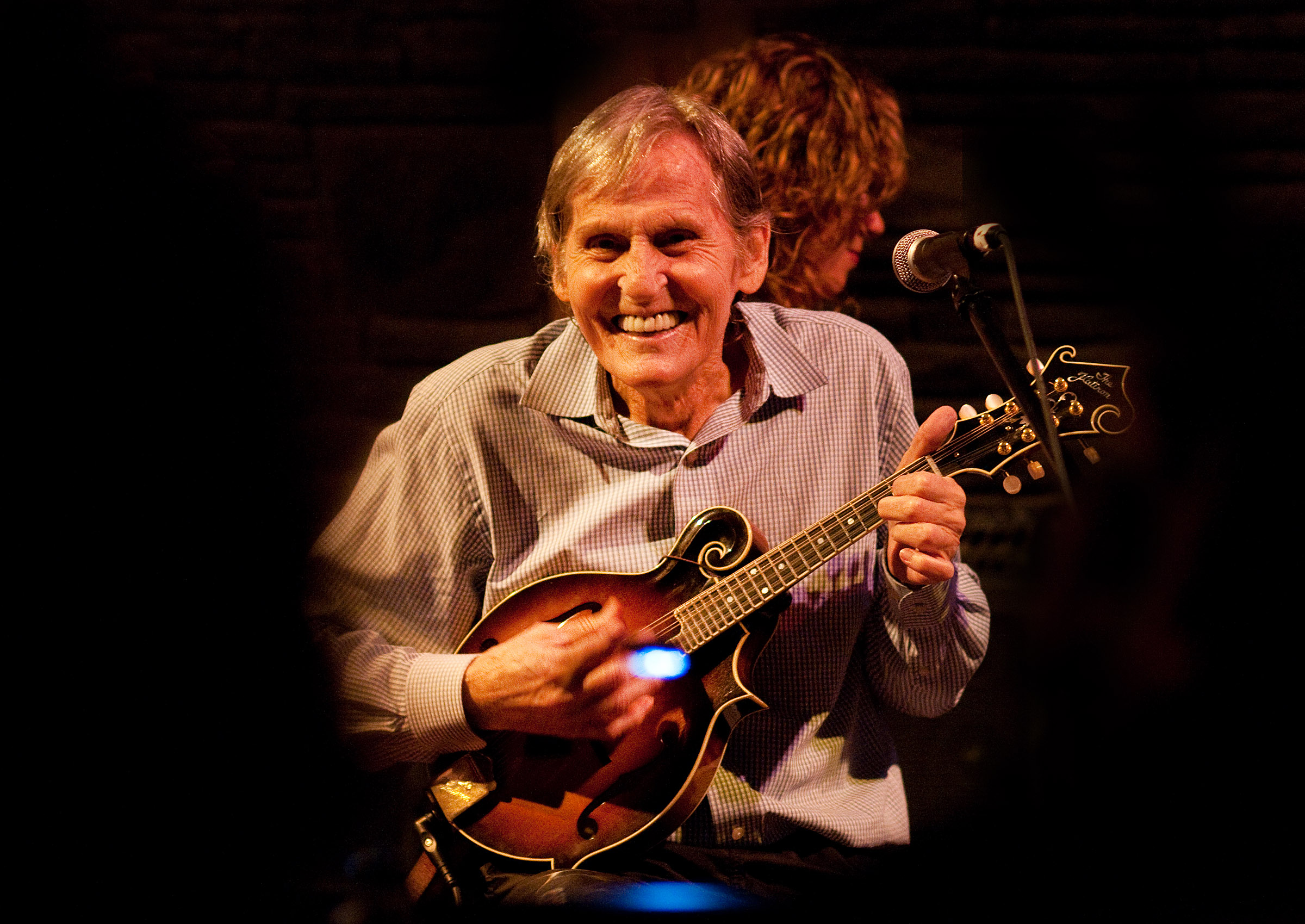 Phillips County native Levon Helm plays mandolin during a 2010 performance at his barn in Woodstock, N.Y. Helm, who died April 19, 2012, in New York, will be honored with a tribute concert at AmericanaFest next week in Nashville, Tenn. (AP Photo/Times Herald-Record, John DeSanto)  Along with his performing and organizing duties, Spradlin is set to lead "Arkansas Creatives," a panel that will include Koch along with singer-songwriter Montgomery and musician-producer Weinheimer.

"I'm hoping we cover the beginning to the now," Spradlin says. "What made Arkansas this kind of breeding ground for roots music ... how did we produce Al Green? Charlie Rich? We also will get into the modern take, and look at why we produce what we produce now. Why is it this creative hotbed?"

Koch, the author of "Louis Jordan: Son of Arkansas, Father of R&B," has long advocated for recognition of Arkansas' musical influence.

"At a certain point, Arkansas has to assert our validity in a way that states like Tennessee or Louisiana or Texas might not have to," he says. "We have to go, hey, we exist and we are just as important, if not more important."

Speaking of Arkansas and the roots of Americana, Koch points out that fiddle player Alexander Campbell "Eck" Robertson of Delaney is credited with recording the first country songs in 1922. The definition of Americana also comes up.

"I like the idea of Americana," he says. "It's more inclusive than just country music has been traditionally. It enables us to throw in some hillbilly music and R&B. The Band was just kind of country R&B."

Weinheimer is a former member of the Boondogs and records under the name Libras. He owns Fellowship Hall Sound recording studio in Little Rock, where he has produced highly praised Americana albums by John Moreland, Jesse Aycock, John Fullbright and others.

"Much of what we do flies under the radar here," he says. "It's not Memphis or Muscle Shoals or New Orleans. I don't think Arkansas is always acknowledged for the talent here and the things going on here, so it's really exciting to be a focus at the festival."

Montgomery, a classically trained vocalist and the Arkansas Country Music Awards' 2020 Entertainer of the Year and 2019 Americana/Roots Artist of the Year, says the current scene in Arkansas seems healthy and vibrant.

"There is a renaissance happening since the pandemic, especially in Arkansas. I've noticed there are a lot more younger people and more female singers than when I was getting started 10-15 years ago. I feel like there is a lot of energy coming into the state now."

Montgomery grew up in Searcy and now lives in Fayetteville. She'll be onstage several times at the fest including a collaboration with Spradlin and is part of the lineup for "The Songs of 1972," where she will cover Elton John's "Honky Cat."

Campbell of The House of Songs has been working with Spradlin and others in organizing the Arkansas programming at the fest.

"I love the idea of all of Arkansas being celebrated," he says. "AmericanaFest is a starting point. Let's get the dialogue going. Once we start defining things, the rest of the world will have a good starting point for Arkansas." 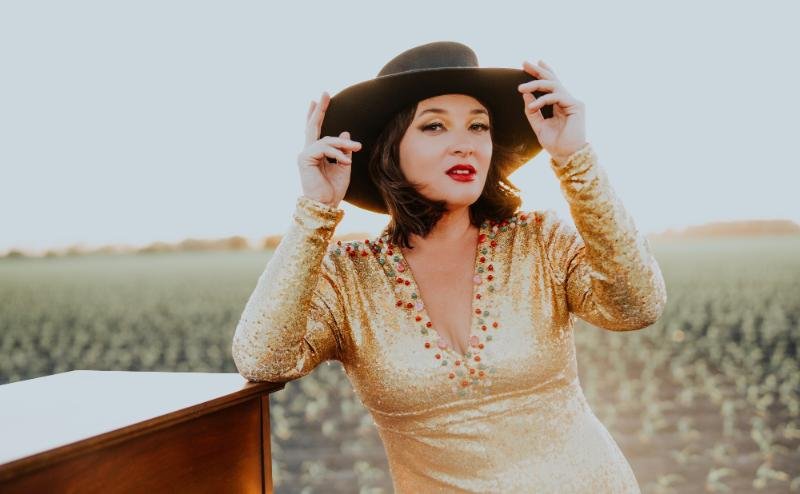 Searcy native Bonnie Montgomery will be among the Arkansas performers at AmericanaFest in Nashville, Tenn. The singer-songwriter will also be part of the “Arkansas Creatives” panel discussion. (Special to the Democrat-Gazette/Jamie LaCombe/Heavy Glow)  22nd Annual AmericanaFest music festival and conference

Print Headline: The state of Americana