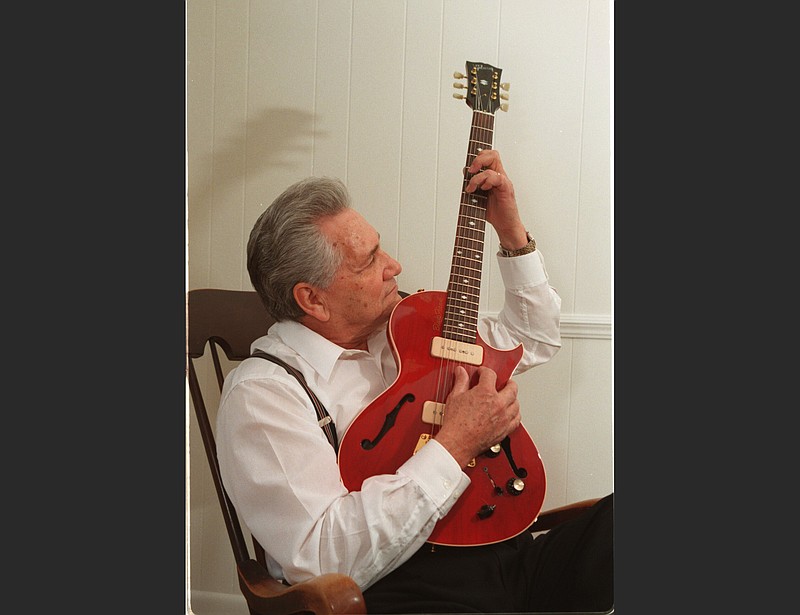 While AmericanaFest is celebrating Arkansas musicians in Nashville, another Tennessee outfit will honor a Natural State music legend.

Billy Lee Riley, whose Sun Records tracks from 1957, "Red Hot" and "Flying Saucers Rock and Roll," were furious examples of early, unhinged rock 'n' roll, will be inducted posthumously into the Memphis Music Hall of Fame on Sept. 15. The singer-guitarist joins Mavis Staples, Booker T. Jones, Ronnie Milsap, Priscilla Presley, Fred Ford, Jim Gaines and J.M. Van Eaton as part of the 10th anniversary class of inductees into the museum. (Van Eaton, by the way, was the drummer in Riley's band, the Little Green Men, the group that became the house band at Sun and that included pianist Jerry Lee Lewis.)

The ceremony takes place at the Cannon Center for the Performing Arts in downtown Memphis. Tickets are $30, and are available at ticketmaster.com.

"I'm a huge Billy Lee Riley fan," says Arkansas guitarist-singer-songwriter Greg Spradlin. "He had an insane amount of talent. If you listen to his stuff from Sun, it's out of control. It's what made rock 'n' roll rock 'n' roll. The way he played guitar was like 'let's break something.'"

Riley, who had nine siblings, was born in Pocahontas on Oct. 5, 1933, to Amos and Mae Riley, according to the online Encyclopedia of Arkansas. He was playing harmonica by age 6 and first heard blues from his Black playmates. After just three years of schooling, he quit to help his family by picking cotton.

In 1943, he got his first guitar and later joined the Army when he was just 15. After an honorable discharge, Riley started a band.

He recorded to songs, "Think Before You Go" and "Trouble Bound" in 1956 that found their way to Sam Phillips, owner of Sun Studios in Memphis. Riley signed a record deal with Sun that lasted through 1960, but commercial success was elusive, especially after Phillips reportedly decided to push Lewis as the label's next star. In the early '60s, Riley worked as a session musician in Los Angeles. By the mid-'70s, he was working as a house painter.

Eventually, Riley began touring on the oldies rockabilly circuit in the U.S. and Europe. In 1992, longtime fan Bob Dylan asked Riley to open for him at Robinson Center Music Hall in Little Rock. Dylan introduced him to the crowd as "my hero."

In 2015 Dylan was honored as Person of the Year by the MusiCares Foundation, a charity that helps artists in need. He spoke about Riley at the event, and his speech was reported on by Bob Mehr in the Memphis Commercial Appeal.

"So Billy became what is known in the industry — a condescending term, by the way — as a one-hit wonder," Dylan said. "But sometimes, just sometimes, once in a while, a one-hit wonder can make a more powerful impact than a recording star who's got 20 or 30 hits behind him. And Billy's hit song was called 'Red Hot,' and it was red hot. It could blast you out of your skull and make you feel happy about it. Change your life."

[RELATED: AmericanaFest will showcase the rich musical legacy of Arkansas]