Arkansas covid hospitalizations see first increase in over a week 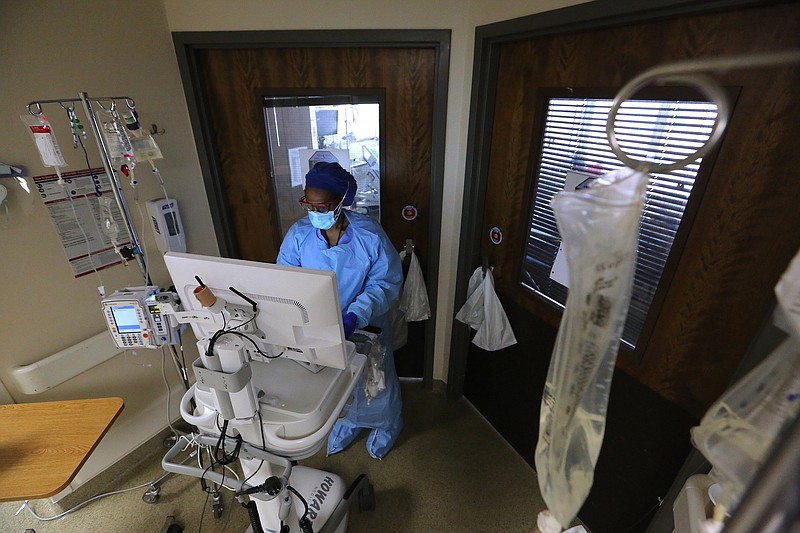 A day after reaching its lowest level in more than two months, the number of people reported to be hospitalized with covid-19 in Arkansas rose Tuesday for the first time in more than a week.

Reflecting a slowdown in testing and reporting around Labor Day weekend, however, the state's count of cases rose by 429, an increase that was less than a third the size of the one the previous Tuesday.

The state's death toll from the virus, as tracked by the Department of Health, rose by three, to 11,936.

Meanwhile, John Vinson, chief executive of the Arkansas Pharmacists Association, said some pharmacies that received an initial supply of the updated covid-19 boosters that were approved by federal regulators last week were continuing to see strong demand for the shots.

Many of those stores belong to the Community Pharmacy Enhanced Services Network, allowing them to receive vaccine shipments through the Federal Retail Pharmacy Program for Covid-19 Vaccination.

Other pharmacies, including ones that rely on the state vaccination program, were still waiting on their first doses.

"The pharmacies that are still depending on the health department -- a lot of them have not been able to access those yet," Vinson said.

Dr. Joel Tumlison, the Health Department's medical director for immunizations, said the state was still waiting on the bulk of the 46,400 doses that it ordered in advance of the vaccines' authorization last week by the U.S. Food and Drug Administration.

He said he expected shipments to continue arriving this week at the department's local health units and hospitals. Some of those doses will then be redistributed to pharmacies and clinics.

"I would say starting next week, they'll be very widely available," Tumlison said.

The revamped vaccines from Pfizer and Moderna target the the original version of the coronavirus as well as two strains of the omicron variant now responsible for most infections.

The FDA last week authorized the vaccines to be given as booster doses to fully vaccinated people whose last vaccine dose was at least two months ago.

The Pfizer vaccine was authorized for people 12 and older, and Moderna's was cleared for those 18 and older.

A recommendation by the U.S. Centers for Disease Control and Prevention late Thursday cleared the way for providers to begin administering the shots.

After falling or staying the same the previous seven days, the number of covid-19 patients in the state's hospitals rose Tuesday by 20, to 281.

The number as of Tuesday was still down by 37 compared to a week earlier, however.

"It does seem that early in the week -- Mondays, Tuesdays, especially after holidays on Tuesdays, we see an increase in hospitalizations, and then subsequently throughout the rest of the week, they stabilize or come down," Cima said.

"Why that happens, I'm not entirely certain."

He noted that the number on Tuesday remained "much lower" than it was a few weeks earlier.

"I think the trend is still firmly in the downward direction," he said.

In recent weeks, state health officials say new cases have been increasing among children, apparently due to the start of the 2022-2023 school year, but continuing to decline in older age groups from the peak they reached in mid-July.

"All things considered, I expect maybe a few more days of increase [in new cases] for our pediatric populations, but I hope that we're nearing a point where those will start to come down as well," Cima said.

He said he doesn't expect "anything outside of just a short-lived bump" in new cases resulting from infections that occurred during gatherings over Labor Day weekend.

The increase in cases on Tuesday was down by 87 compared to the one on Monday and by 954 from the one the previous Tuesday.

Washington County had the most new cases, 60, followed by Pulaski County with 58 and Craighead and White counties, which each had 30.

After rising a day earlier, the average daily increase in the state's case count over a rolling seven-day period fell to 842, its lowest level since the week ending June 27.

Dropping for the third day in a row, the number of cases in the state that were considered to be active fell by 725, to 10,985, its lowest level in just over a week, as recoveries outpaced new cases.

The number of the state's virus patients who were reported to be in intensive care, which had been at a two-month low on Monday, rose Tuesday by six, to 41.

Growing for the second day in a row, the number reported to be on ventilators rose by three, to 12.