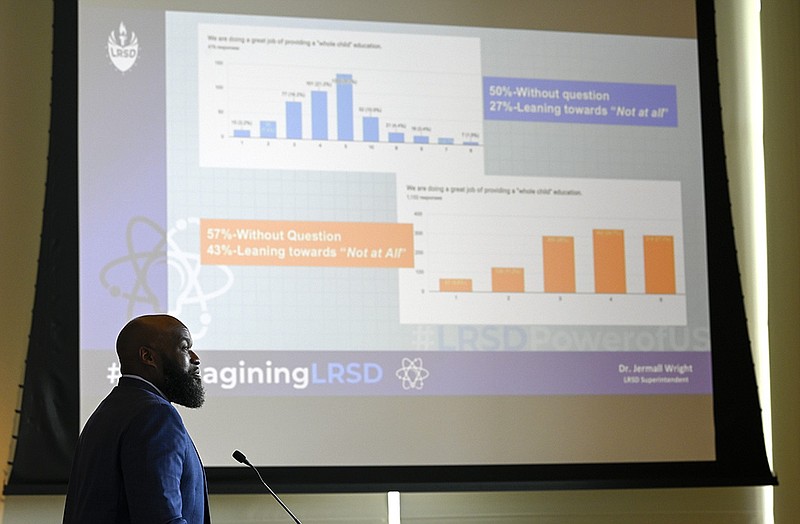 Jermall Wright, the new superintendent of the Little Rock School District, called for "re-imagining" the state's second-largest district as a way to benefit students.

Speaking to about 125 civic and business leaders at the Rotary Club of Little Rock, Wright said Tuesday that re-imagining the state's second-largest district "doesn't mean blow everything up and start over."

"That's definitely not the case," he said.

The district that he has headed since July 1 is doing many things very well, he said, but even those jobs and services that are being performed well can be done differently in an ongoing effort to help every single student meet and exceed their grade-level expectations in all academic areas.

"That is our just cause," he said about the student success. "That is the reason I sought this position. It is the reason I will do whatever I can to make sure we get as close to that just cause as possible in my tenure as superintendent. We may never get there, but my job is to get us there as close as we can."

He pointed to the district's four-year graduation rate as a place for improvement. In recent years, about 80% graduate but that is lower for students who are Black, Hispanic, receive special education services or who are not native English speakers. That is about 320 students per year who do not graduate from the district, he said, which adds up to a lot of people over time.

"I'm pretty sure they aren't packing up to leave Little Rock but are still living in Little Rock," Wright said of those who don't graduate.

There are many negative implications -- economically, socially and politically -- that come from having so many without a high school diploma living in the city, he said.

"We have a lot of work to do to make sure that we cut down this number and we are putting some things in place to do that," Wright said, adding later that "the damage is done" regarding graduation even before students get to high school.

He highlighted the district's grade-by-grade results from the state-required ACT Aspire exams, which are below the state averages and below the achievement levels earned in 2019 before the educationally devastating covid-19 pandemic that began in March 2020.

Data doesn't lie, he said, and urged a sense of urgency in raising achievement.

Wright noted that the state results were also low -- particularly in reading, which he described as "scary" low. That has implications beyond just test results, he said.

Reimagining the Little Rock district is going to require a focus on relationship-building with students and families, Wright said.

"We have to do a better job of reimagining how we make everybody feel like they belong in our schools and make sure everyone feels welcome and make sure we reimagine how we engage with parents to make them partners in this process."

Another focus has to be providing students -- who Wright calls the Tik-Tok Generation because they are growing up in a digital age -- with choices and a voice to make their learning relevant to them.

He cited the district's use of the national Ford Next Generation Learning model as an example of providing choice. The model -- being implemented over time -- transforms high schools into career-focused academies in which students learn academics in the context of different career fields.

Another area of focus that Wright said he has presented to employees is the issue of time and structuring of the work day.

Teachers need more time for planning, collaboration and preparation. Teachers in the United States spend more time actively teaching -- 27 hours a week -- than do teachers in other countries such as Singapore, 17 hours, and Finland, 21 hours, that have better student achievement, he said.

The superintendent called on the civic club members who have businesses to have those businesses adopt a school to support the students and staff there and that they consider becoming mentors to district students.

Lastly he asked that the club members advocate for the district.

Jennifer Glasgow, the City of Little Rock's new chief education officer, introduced Wright to the audience by highlighting his successes as a school turnaround principal and administrator in Washington; Denver; Birmingham, Ala. and in Mississippi.

Glasgow also noted that Wright, whom she called a trust-builder, spent part of the first day of school this year riding a school bus with students to Mabelvale Elementary.