Arkana Labs to hire 74 in expansion 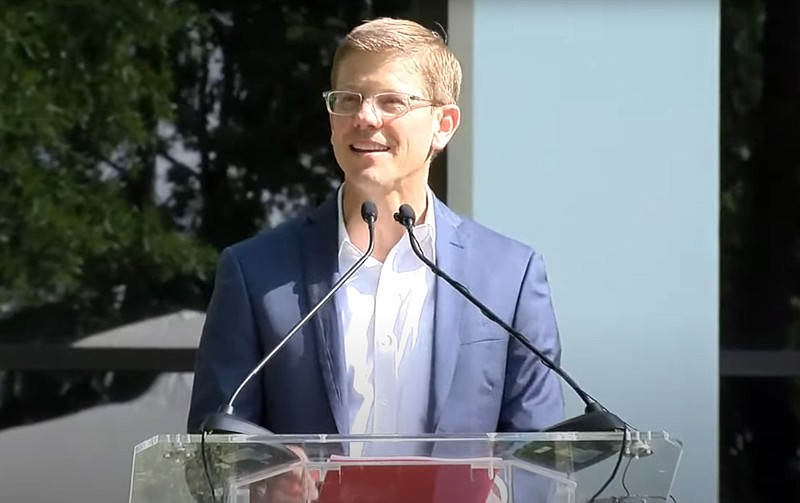 Dr. Chris Larsen, chief executive officer of Arkana Laboratories, speaks at the company's Little Rock headquarters in this screenshot of video recorded Wednesday, Sept. 7, 2022. Larsen was announcing the expansion of the company's headquarters, which will add about 10,000 square feet to the 95,000-square-foot-facility in Westlake Corporate Park at 10810 Executive Center Drive. (Courtesy photo, Arkansas governor's office)

Arkana Laboratories will invest upwards of $30 million to expand its Little Rock headquarters and add 74 new jobs in the next five years.

The company, which offers diagnostic pathological services nationwide, also said Wednesday the investment will add 10,000 square feet of space to the 95,000-square-foot-facility in Westlake Corporate Park at 10810 Executive Center Drive, which Arkana purchased this spring for $15.85 million.

"The rapid growth of Arkana Laboratories for the last 20 years has been fueled by successful execution on our mission of improving patient care by advancing our understanding of disease and providing world-class diagnostics," Dr. Chris Larsen, chief executive officer, said Wednesday in announcing the expansion.

"The planned job growth, infrastructure investment and R&D efforts are all focused on pressing even more into this mission and we anticipate continued steady growth for years to come," he said.

Expansion of company headquarters should be completed by 2024, according to Larsen.

Arkana, founded in 2001, says it is the largest renal pathology lab in the United States and its patient base has exploded over the past two decades. The lab processed just more than 500 kidney biopsies in its first year and plans to exceed 24,000 coming from 44 states this year, Larsen said.

Gov. Asa Hutchinson pointed to the expansion as evidence of his administration's strategy to diversify Arkansas' economy and build a stronger tech-focused workforce.

"Our economic development support goes to not just traditional manufacturing but it is broad based to those who are going to create jobs for the future," the governor said Wednesday.

Hutchinson, who leaves office this year, said the administration's focus will be on workforce development, infrastructure investment and new-economy jobs.

"These are the jobs that we want to create," the governor said at the announcement, highlighting the Arkana expansion.

Arkana has about 150 employees and will grow to 220 after the expansion, officials said. Along with renal pathology, the lab provides neuropathology services and contract research.

The state is offering incentives that include the Advantage Arkansas initiative, which provides tax credits by creating new jobs, and the Tax Back program, which grants sales and use tax refunds for the purchase of building materials and machinery and equipment.