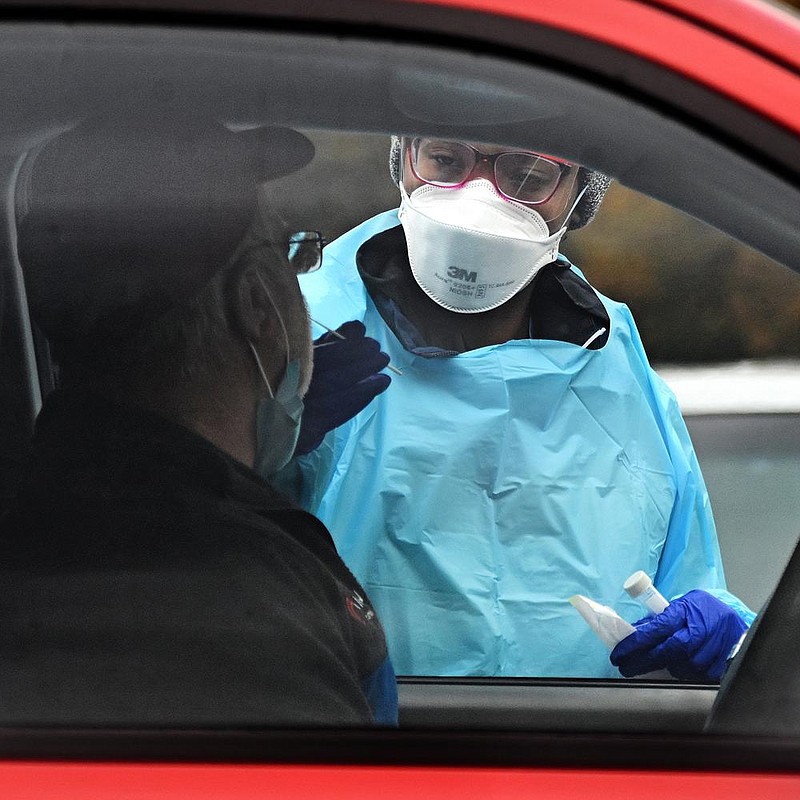 Breunna Lewis (above), a medical assistant for UAMS, administers a covid-19 test Thursday at the Lonoke Community Center as the number of cases in the state hit a new high of 2,789. More photos at arkansasonline.com/124covid/. (Arkansas Democrat-Gazette/Staci Vandagriff)

A week-over-week decline in Arkansas' new coronavirus cases, possibly stemming from lower testing over Labor Day weekend, continued for a third day on Thursday as the number of people hospitalized in the state fell for the second day in a row.

The state's death toll from the virus, as tracked by the Department of Health, rose by seven, to 11,951.The state's count of cases rose Thursday by 1,143.While larger by 101 than the rise on Wednesday, it was down by 180 compared to the increase the previous Thursday.Health Department spokeswoman Danyelle McNeill said, however, that a slowdown in testing and reporting around Labor Day, which caused Tuesday's new case number to be unusually small, could have also affected the numbers on Wednesday and Thursday.Falling for the third day in a row, the average daily increase in the state's case count over a rolling seven-day period fell Thursday to 797, the first time it had been below 800 since the week ending June 23.With new cases outnumbering recoveries, however, the number of cases in the state that were considered active rose by 15, to 10,972, after falling the previous four days.After dropping by five on Wednesday, the number of covid-19 patients in the state's hospitals fell Thursday by four, to 272. That was still up from the two-month low of 261 that the number reached Monday, however.Growing for the third day in a row, the number of the state's virus patients who were in intensive care rose Thursday by four, to 46.The number on ventilators fell by two, to 11, after rising the previous three days.