Covid hospitalizations in Arkansas fall by 5 Wednesday, one day after increasing by 20 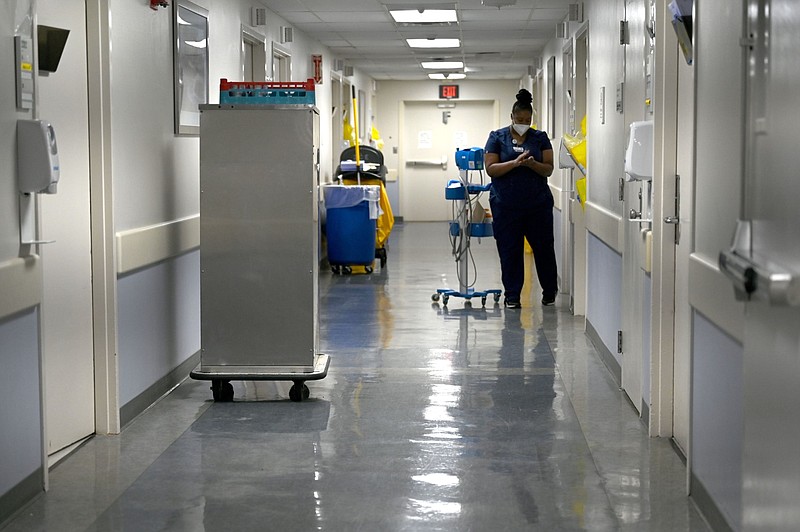 Sharaina Smiley, a Patient Care Technician at Jefferson Regional Medical Center in Pine Bluff, puts on personal protective equipment, or PPE, before entering a patient's room in the covid ward of the hospital in this Feb. 18, 2022 file photo. (Arkansas Democrat-Gazette/Stephen Swofford)

After rising a day earlier for the first time in more than a week, the number of people hospitalized with covid-19 in Arkansas fell Wednesday but was still up from the two-month low it reached Monday.

The state's count of cases rose by 1,042, an increase that was down by 138 compared to the one the previous Wednesday.

The state's death toll from the virus, as tracked by the Department of Health, rose by eight, to 11,944.

The number hospitalized, which rose by 20 on Tuesday, fell Wednesday by five, to 276.

Although it crept upward for about a week in late August, the number has mostly fallen since hitting a summer peak of 442 on July 20.

"I'm hopeful that it will continue [going] down," Cima said Wednesday. "Today was a good sign."

The number of deaths reported each day has also recently been on the decline.

Over the seven-day span ending Tuesday and Wednesday, a total of 26 deaths were reported, the lowest weekly totals since mid-July.

"That tracks with what we've seen historically after peaks," Cima said.

"Cases come down first, then hospitalizations start coming down, and then deaths follow suit.

He said he was hopeful that new cases among children, on the rise since the start of the 2022-23 school year, would soon start to decline and that any increase in transmission resulting from gatherings over Labor Day weekend would be minimal.

Due to slowdowns in testing and reporting that occur around holidays, it was difficult to infer much from the state's new case numbers over the past few days, he said.

"I think the next couple days and weeks will be telling," Cima said.

Meanwhile, more Arkansas pharmacies on Wednesday began administering the updated vaccines from Pfizer and Moderna that were authorized by federal regulators last week as booster doses for people whose last vaccine dose was at least two months ago.

Medical Arts Pharmacy in Fayetteville received its initial supply -- 300 doses of Pfizer and 100 of Moderna -- on Tuesday and began administering the shots on Wednesday morning, pharmacist Julie Stewart said.

"We've had a pretty steady stream of people coming in to get them," Stewart said.

The store is among dozens in the state that received doses through the Community Pharmacy Enhanced Services Network as part of the Federal Retail Pharmacy Program for Covid-19 Vaccination.

The state vaccination program, which also supplies pharmacies as well as clinics and other providers, as of Tuesday was still waiting on the bulk of the 46,400 doses it ordered last week.

Dr. Joel Tumlison, the Health Department's medical director for immunizations, said Tuesday the doses were due to arrive by the end of this week.

He said he expected them to be widely available at pharmacies, clinics and Health Department local health units by next week.

Pulaski County had the most new cases, 121, on Wednesday, followed by Craighead County with 74, Faulkner County with 64, and Benton and Washington counties, which each had 62.

Already down due to the holiday weekend, the average daily increase in the state's case count over a rolling seven-day period fell Wednesday to 823, its lowest level since the week ending June 26.

Dropping for the fourth day in a row, the number of cases in the state that were considered active fell by 28, to 10,957, as recoveries outpaced new cases.

Growing for the second day in a row, however, the number of the state's virus patients who were in intensive care rose by one, to 42.

The number on ventilators also rose by one, to 13, its third straight daily increase.

At its hospitals in Little Rock and Springdale, Arkansas Children's had 20 covid-19 patients on Wednesday, up from 16 a week earlier, spokeswoman Hilary DeMillo said.

Print Headline: State’s covid hospitalizations down by 5; deaths up by 8