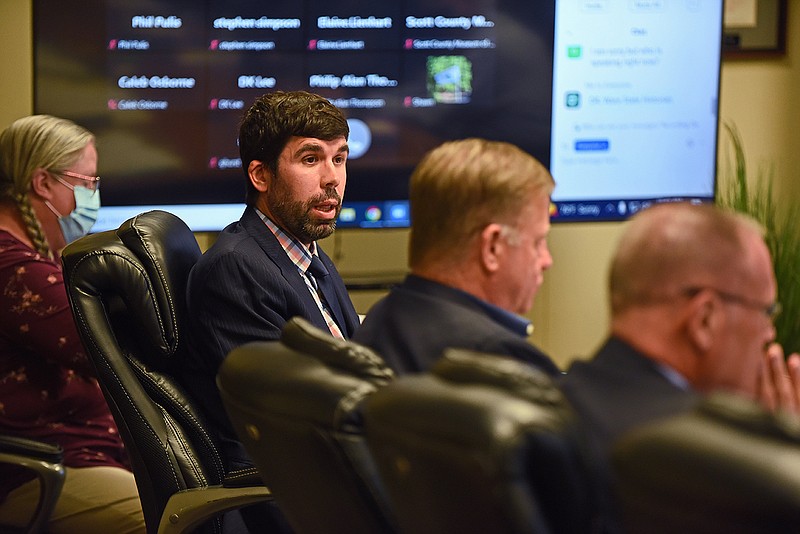 Colby Roe, an attorney representing the city of Fort Smith, discusses his request for a waiver to remove the Confederate flag from the historical Flags over Fort Smith display during the Arkansas History Commission meeting Thursday in Little Rock. (Arkansas Democrat-Gazette/Staci Vandagriff)

Fort Smith must keep the Confederate flag as part of its Flags over Fort Smith display if the city wants to restore the monument, a state panel decided Thursday.

The waiver request to determine the disposition of the Riverfront Park flag display was the first to go before the Arkansas History Commission since the Arkansas State Capitol and Historical Monument Protection Act became law.

The commission's denial does not mean Fort Smith will be required to put the flag display back up -- that decision rests with city officials -- but if it does, the display must include the Confederate flag.

The waiver request was denied 2 to 1, with Heather Nelson and Ronald Fuller voting against the request and commission chair Micheal Tarver the lone vote in favor of granting the waiver. Commission member Brady Banta voted present. The other members of the seven-member board -- Shawn Fisher, Jason B. Hendren and Rod Soubers -- were not present or didn't vote at the meeting.

The Flags over Fort Smith display featured flags that have flown over Fort Smith since 1699 and included the French Fleur-De-Lis, the Spanish Cross of Burgundy, the French Tri-Color Flag, the U.S. 15-star, 20-star and 24-star flags and the Confederate flag.

Colby Roe, an attorney representing the city, contacted the commission in August and requested a waiver under the Arkansas State Capitol and Historical Monument Protection Act, according to documents obtained by the Arkansas Democrat-Gazette through an Arkansas Freedom of Information request.

Roe said in his request that despite the city's removal of the flags a year prior to the monument act being passed, a court ruling required the city to seek a waiver before replacing the flags. Originally, Roe had requested a waiver in September 2021 to alter the flag display, but rules for the commission had not been promulgated in accordance with the Arkansas Administrative Procedure Act.

Banta said Thursday that among the things giving him pause was the city didn't have any documentation showing that if the flags were replaced they would be donated to a local museum, despite the application hinting that was the plan.

Shari Cooper, communications manager for the city of Fort Smith, said City Administrator Carl Geffken will meet with the city's Board of Directors and its legal team before further decisions take place regarding the future of the flag display.

"He needs their input before moving forward," Cooper said.

Two years ago, the city tried to get new flags but learned the vendor no longer sold Confederate flags. The city decided the flags would not be reinstalled and instead decided to replace them with flags that represent the six branches of the military.

The Arkansas State Capitol and Historical Monument Protection Act, or Act 1003, became law in April 2021 and prohibits the removal, relocation, alteration or renaming of a memorial on public property.

According to the law, a public entity that has control of a memorial may petition the History Commission for a waiver from the prohibition if the monument will be moved or relocated for more than 60 days. The act also requires governmental entities to register historical monuments erected after April 28, 2021, the act's effective date, with the History Commission.

The commission is part of the Division of Arkansas Heritage, which is within the state Department of Parks, Heritage and Tourism. Rules pertaining to the Arkansas State Capitol and Historical Monument Protection Act were not passed until this summer.

Rules approved by the committee describe a "historical monument" as a statue, memorial, gravestone plate, plaque or historic flag display that is located on public property and was installed, erected for, named or dedicated in honor of an historical person, an historical event, a public service organization, a firefighter, a police officer, a military organization or a military unit on public property and has been listed on the National Register of Historic Places or in a veterans cemetery.

The law passed during a time when several Confederate monuments across the country were removed or torn down in the wake of several killings of unarmed Black people by law enforcement officers. Several Arkansas cities have waited months for the rules because of questions surrounding the removal, repair and creation of monuments.

Attorney Joey McCutchen filed a lawsuit in June 2021, arguing the city violated the Arkansas State Capitol and Historical Monument Protection Act by removing the display and not replacing it or obtaining a waiver within 60 days. The law took effect April 29, 2021.

McCutchen, who was present at Thursday's meeting, said the decision was important and sets a precedent for such monuments.

"Words are important, but actions are critical," he said. "You are going to send a message one way or another about preserving Arkansas heritage."

McCutchen contends the city's statement about the difficulty of finding a replacement for the flags was a deception.

The city has maintained the reason for the waiver request is because of complications getting newer replica flags, but Roe said in the city's most recent waiver request filed in August that issues surrounding the Confederate flag also were a part of the consideration. Roe said in the waiver that many within the community find historical associations with the Confederacy "emotionally charging and potentially provocative."

Geffken told the commission the decision to remove the flags was his.

"When the flags were tattered due to the weather, which does happen, a decision was made not to reinstall them in April of 2020," Geffken said. "We decided to move forward with flags of the military to coincide with F-35 project. The subsequent lawsuit was then filed, and we haven't done anything more at this time."

When questioned about the "emotionally charging and potentially provocative" statement in the application, Geffken said he received such feedback from multiple city officials and community members in Fort Smith.

"It starts with our mayor and goes all the way down to church and community leaders," he said.

The small conference room where Thursday's meeting was held was filled with supporters of the Flags over Fort Smith display, with multiple speakers describing the removal of the flags as unacceptable.

"How many times have we been at the State Capitol to argue about anything that has a Confederate relationship? Five, six or seven times?" asked Robert Freeman, a supporter of the Flags over Fort Smith display. "... Elimating these one by one and we will end up with nothing if it doesn't stop."

Phillip Alan Thompson spoke in support of rejecting the waiver request, saying if allowed it would be a "travesty of justice."

"This isn't the Taliban sweeping across the nation tearing down whatever they don't like," he said. "We are a nation of laws. Without any question whatsoever, this waiver should be denied. I believe it's appropriate to bring legal charges against the people in Fort Smith who were involved with this."

"I put the waiver process in the act because we needed to have a way for conflicting government interests like repairing a road or a water main burst," Johnson said. "To allow for political correctness is not in the law. ... Anything beyond that is using the waiver process to obliterate the purpose of the law, and that is what Roe is implementing right now and the people who made the argument in 2020 to destroy anything South or the Confederacy."

Johnson said even though Fort Smith removed the flag display before the monument act was passed, the law was created in a way that it can be used retroactively. Even if a monument has been removed, if the city still has possession of it the law still applies, he said.

"When we say all the things that you can't do to the monument, it applies to the ones in closet and the ones on the courthouse," he said. "I crafted it like this because I could see people trying to take stuff down beforehand. I put it in before the people who want to rewrite history got their say.

"This law applies to this flag display even though it was taken down before the passage of the act."

Nelson asked whether the law states if a waiver is declined then a city must put up the previous monument. Johnson responded that in his opinion, a waiver denial means a monument should be restored to its proper place.

Tarver said the commission's ruling doesn't require the city to restore a monument after it was taken down, just that it can't be replaced with something new.

"The law doesn't force them to put it back up, but it prevents them without a waiver of disposing of the flags," he said.

Banta agreed, saying the commission's only job was to say "yay" or "nay" to the waiver.

After denial of the waiver, the commission passed a motion to allow a city to reapply if its waiver is denied.