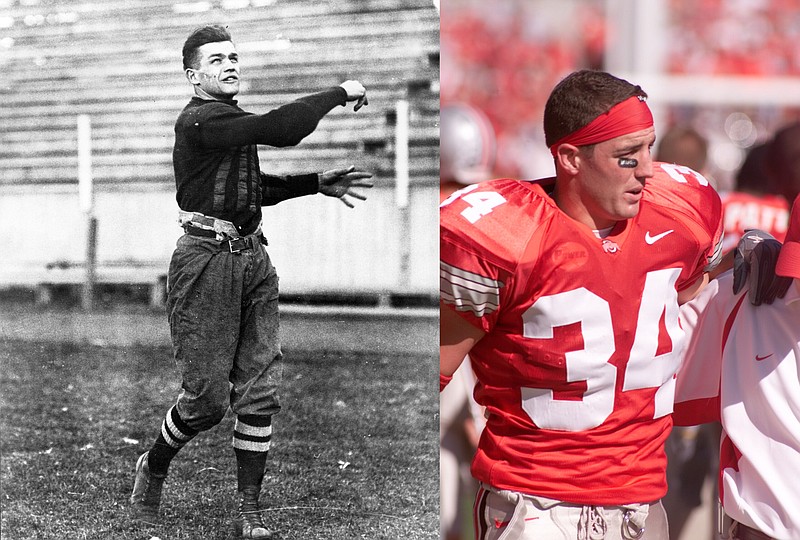 Bob Harley remembers the light at the end of the hallway inside Ohio State's St. John Arena.

It was late 1965 and neither he nor his twin brother, Bill, were probably supposed to be in the building. But the two were in town with their Miami (Ohio) hockey team for a game against Ohio State and had heard there were photos of their great-uncle, Chic, somewhere in the arena.

The doors were unlocked, so the Harleys wandered in, eventually making their way up a stairwell. They poked their heads into the last office on the row. There sat legendary Ohio State football Coach Woody Hayes.

"He was a little concerned," recalled Bob Harley, father of current Arkansas State defensive coordinator Rob Harley. "We explained that we were there to play hockey, but we were [in the arena] because we had a relative who had played here.

"Come with me," Hayes said, walking them to the photos they sought while detailing the spiel he annually gave to Ohio State's freshman class regarding Chic's impact in Columbus.

To describe Chic Harley as "a relative" was simply a statement of fact for Bill and Bob. Their dad, William Harley Jr., was the son of William Harley Sr., who was the older brother of Charles -- better known as Chic.

But for those at Ohio State, Chic Harley was far more.

He was an icon. The school's first three-time All-American and a charter inductee of the College Football Hall of Fame, Ohio State retired Chic's No. 47 in 2004.

He was an inspiration. In the wake of his Buckeye career, the school began raising the $1.3 million needed to build Ohio Stadium, the same fortress that Rob Harley, Chic's great-great nephew, and the Red Wolves will enter Saturday when they face No. 3 Ohio State.

And to some, Chic is the foundation of a program that has dominated college football for much of the past century.

"It's always hard to say, 'What would've happened if ...' " said Bob Hunter, a former Columbus Dispatch columnist who detailed Chic Harley's life in a 2008 biography. "You can make a case that maybe Ohio State football would have never become the Ohio State football it is now without him."

Chic Harley arrived at Ohio State in 1916 after graduating from East High School across town in Columbus. The Buckeyes joined the Western Conference -- now the Big Ten -- four years earlier, but were hapless compared to the likes of early powers Wisconsin, Illinois and Minnesota.

Ohio State played its games at Ohio Field, which held a mere 500 fans until 1907 when grandstands and bleachers began to encircle the playing surface. By 1914, its capacity grew to 14,000, but fans found extra places to watch, either outside the fences or on roofs of nearby homes.

The reason so many came to watch? Chic Harley.

Rain at Ohio Field turned the 1916 meeting between Ohio State and Illinois into a mud bowl. The Buckeyes trailed most of Chic's second game in uniform, down 6-0 until the final drive.

That's when Chic marched the Buckeyes for the game-tying touchdown. Needing an extra point to win, Ohio State turned to its kicker ... Chic Harley.

"His shoe was all full of mud, so he took his shoe off and said, 'Give me a shoe,' " Hunter said. "They throw him a clean shoe, he kicks that extra point and they win. ... That's kind of the big bang of OSU football."

The Buckeyes went 7-0 that season on the way to the program's first Big Ten championship. They repeated the following year.

Chic then left school to serve as an Air Force pilot in World War I, missing the 1918 season, before coming back in 1919. His only loss at Ohio State came in that season's finale -- a 9-7 Illinois win that gave the Fighting Illini the Big Ten title.

In the wake of Chic's stardom, the university developed plans for a stadium that would seat more than 66,000. At the time of its completion in 1922, Ohio Stadium was the world's largest poured concrete structure.

"People didn't believe it," Bob Harley said. "[They] said there's no way you could get a stadium built [for] 60,000 people...[and] get enough people to fill it. Well, obviously, that wasn't the case."

Eighty years after Ohio Stadium hosted its first game, Rob Harley arrived on campus in Columbus as a freshman. He'd eschewed other opportunities, including Big Ten rival Illinois, to walk-on with the Buckeyes.

His dad had considered taking a similar path almost four decades prior. But Bob knew he wasn't good enough to cut it at Ohio State.

Rob, on the other hand, was determined. And he didn't want special treatment as the relative of a program legend.

"Since he was a little boy, he always dreamed of going [to Ohio State]," Bob Harley said of his son. "No offense to Illinois, but [Rob wanted] to know what it's like to be with [the Buckeyes'] level of talent."

Rob Harley was part of Ohio State's undefeated 2002 team, a group that included future NFLers Santonio Holmes and Nick Mangold. Over his time as a Buckeye, he teamed up with A.J. Hawk, Bobby Carpenter, James Laurinaitis and current Notre Dame Coach Marcus Freeman on the defensive side of the ball.

Throughout those years, then-coach Jim Tressel would always call Rob by his great-great uncle's nickname -- or more likely, Chiclet -- even if nobody else knew what he was talking about.

"Chic [Rob] didn't back down from anything," Tressel told the Arkansas Democrat-Gazette last fall. "He didn't think anything was going to happen overnight. He just wanted to find out, 'What do I have to do to make it?' "

Rob stayed in Columbus after his playing days, attempting to build a career as a TV broadcaster. Six years later he pivoted to coaching, first at Division II Ohio Dominican, then Michigan State, Florida International and Pittsburgh, before landing his current gig as ASU's defensive coordinator.

All told, Rob hasn't been back to Ohio Stadium for a game in more than a decade.

It's fitting, then, that in the 100th anniversary season of The House That Harley Built, a descendant of its namesake is coming home.

WHEN 11 a.m. Central on Saturday