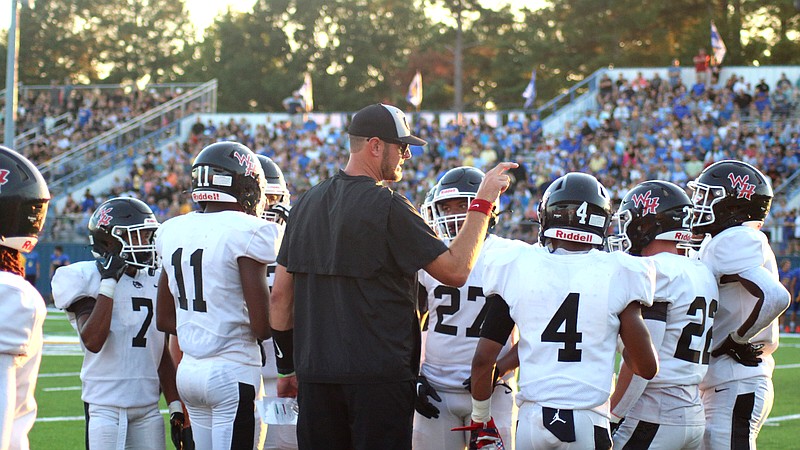 White Hall Coach Ryan Mallett instructs his team during an Aug. 26 game at Sheridan. (Special to The Commercial/Jamie Hooks)

The nine teams in the realigned 5A-Central Conference don't get to rehearse anymore to chase a championship.

Gone are state champion Pulaski Academy, Little Rock Christian Academy and Jacksonville, all now in 6A. White Hall, Watson Chapel, Maumelle and Beebe are back, with Pine Bluff, Mills, Morrilton, Robinson and Vilonia joining the party.

While Pine Bluff and Watson Chapel renew their city rivalry with much more on the line than in recent years, White Hall and Maumelle have the makings of their own marquee matchup. They'll kick off at 7 tonight at Bobby Tiner Stadium, 100 Victory Lane in Maumelle.

"The kids believe in their coach and what he's doing," White Hall Coach Ryan Mallett said of Maumelle counterpart Brian Maupin. "He's a high-energy guy. They're a good football team. They've got a lot of athletes. They have a lot of speed. They've got some size. They've got a big ol' tight end who also plays defensive end [6-foot-4, 242-pound Amarie Rogers], so we better bring our lunch pail."

Mallett is a first-year head coach with the Bulldogs, just like Maupin, who helped Robinson win two of the last three 4A state titles as defensive coordinator. The 5A state runner-up Bulldogs (1-1) are just a drive away from being unbeaten, while Maupin's Hornets (2-0) had to survive overtime against Sylvan Hills, 28-27, and shut out traditional power Batesville 35-0.

"I think it's very exciting," Maupin said. "It shows us the grit and determination we have, but it also shows us the potential, if we execute well, of the level of success we're able to have."

The Hornets were 4-7 last year but still made the 5A playoffs, narrowly stunning eventual semifinalist Greenbrier in the first round.

It may help Mallett that the Bulldogs, he said, have had a better week of practice for Maumelle than they did against Warren.

"They were a little more focused," he said. "We tried to get them like that last week. We couldn't quite get the message across to them."

In Maumelle, the Hornets have adopted a win-now mentality under Maupin, and they have the athletes to help them, like senior cornerback Demontre Clegg (three interceptions, one returned for a touchdown this year), senior quarterback Weston Pierce and junior wide receivers Allen Timmons and Elijah Newell.

"As a new coach, it's easy to take a futuristic approach or three-year plan or something like that," Maupin said. "My seniors don't have a three-year plan. I've got to give them everything I can to help us to win now. That's kind of been the goal since Day 1, is to honor these seniors with our preparation. I've been very encouraged and optimistic all year."

White Hall junior Noah Smith more than got has his feet wet as quarterback, taking over for run-pass threat Matthew Martinez. Junior left tackle Landon Meredith protects Smith's blind side and anchors an offensive line that has grown up quickly from last year's match to the 5A title game.

"The biggest thing, I think Coach Mallett's got them playing really hard," Maupin said. "Obviously, it's a different team from last year's team, but the thing that jumps out on film is that they're playing really hard, they're flying to the ball on defense. Coach [and defensive coordinator Hunter] Vincent's doing a really good job with them flying around. You can tell they've got a lot of confidence and are playing some really good football."