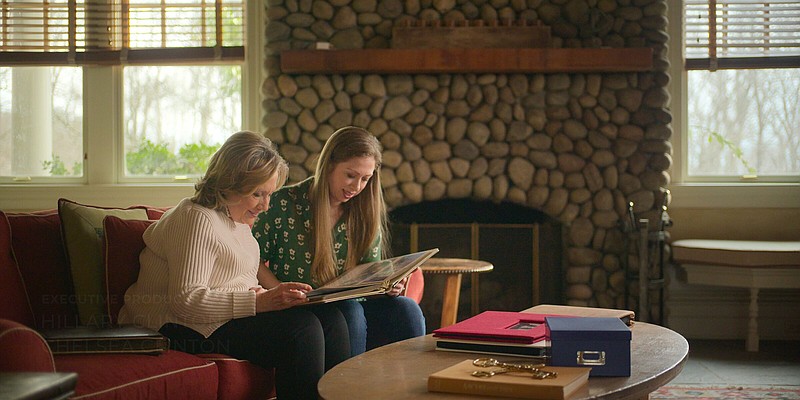 Former U.S. Senator, Secretary of State (and first lady) Hillary Clinton and her daughter, Chelsea, take their mother-child energy on the road to tell female empowerment stories in their documentary series “Gutsy,” which premieres today on Apple TV+.

Having interviewed people for pocket money for over three decades, I may have taken for granted how challenging or intimidating the process can be, especially for beginners.

In the new eight-part Apple TV+ docuseries "Gutsy," Hillary Rodham Clinton and her Little Rock-born daughter, Chelsea Clinton, have switched from being the subjects of interviews to asking several women across the world who have unflinchingly confronted formidable challenges. The series debuts today.

Some, like primatologist Jane Goodall, are famous, and others, like a group of tough firefighters, deserve greater recognition.

Both Clintons have spent a majority of their lives as public figures. For those who might have been recently born or living under a rock (instead of Little Rock) for the last few decades, Hillary was Arkansas' and later America's first lady when her husband, Bill, served as governor and president. She later represented New York in the U.S. Senate and served as Secretary of State under Barack Obama.

Having briefly worked at NBC News and hosted a podcast ("In Fact with Chelsea Clinton"), Chelsea has a little more journalistic experience, and she's also the author of the popular "She Persisted" series of children's books.

Both have been heavily scrutinized in various media, but Hillary admitted via Zoom from New York last Tuesday, "It's hard. I'll tell you it's a, it's a big difference from being the person being interviewed to the interviewer. We learned so much. I am in great admiration for how hard it is to produce something like what we did in our series. It was a real learning curve and, um, I ended up enjoying it a lot."

Chelsea quickly elaborated, "I think that to build on what my mom was saying, when she says we learned a lot, I think we certainly learned about the craft of having to interview people and kind of maintain the momentum of a conversation. I think though, even more about how much effort it is, how much work it is by so many people to create a docuseries and especially to do so during covid."

"And so while it wasn't only the people on the set and then the people behind the people on the set, it was the epidemiologists (Hillary laughed) and the people monitoring the health protocols and the nurses who would show up and swab us once, sometimes more than once a day. I think that is also something that we just have such a deeper appreciation and humility, and gratitude for was just how hard it is."

For example, the younger Clinton documented Goodall's life, work and activism in "The Book of Gutsy Women: Favorite Stories of Courage and Resilience," a book she co-wrote with her mother. It was one thing to write a few paragraphs. It was another matter to speak with the English Goodall over a live trans-Atlantic video conference.

"Oh, my gosh, Chelsea's been in awe of Jane Goodall since we used to go to the Little Rock Zoo," Hillary says. "Jane Goodall's been one of her real icons."

"If you ask me what was I most nervous about in this whole series, it was talking to Jane Goodall just because she's Jane Goodall," Chelsea adds, noting that she was surprised when the scientist candidly explained how she kept her voice, um, functional during long conversations.

"So, it was like morning time in New York, and at some point -- I don't think this actually made it into the series -- at some point she was like, 'Chelsea, you should join me.' And I was like, it's 10 a.m. here (laughing). Maybe when you're Jane Goodall and you"re almost 90, I guess you can drink whiskey whenever you want, but I'm a mom of three, and I'm not Jane Goodall, and I can't quite pull that off in the morning time."

As the title of the 2019 book and current series illustrate, many of the subjects have taken on agribusiness, challenging sports like surfing and mountain climbing and even hate groups. The Clintons conducted many of their conversations in unconventional settings, and many of the people they speak with might have viewed them as antagonists until a few years ago.

When they meet with rapper Megan Thee Stallion, the conversation happens over painting. They also take a canoe trip with former white supremacists.

"We wanted to show a real diversity of women and to kind of explore why they were gutsy and how they got there," Hillary says. "And so yes, we were on a river in Georgia in a canoe with a former white supremacist who got herself out of that life and is now helping to deprogram others including a young woman who was with her.

"We got to talk to all the way to Megan Thee Stallion, who is obviously world famous for being a rapper, but who we painted with because all the activities we did were the ones that the people we were talking to requested, so that's how (Megan) finds relaxation in the midst of what has got to be a really a high-octane life. But that's what was so interesting is the different activities that everybody chose reflected something about who they are and what they do."

Then-Gov. Orval Faubus went to great lengths to prevent them from getting diplomas, even ordering the Arkansas National Guard to keep them out. In the series, Brown-Trickey and Walls LaNier recount their often-hair-raising experiences in 1957 inside the school where they were initially unwelcome.

"It was really important to us," Chelsea says. "As a kid who went to public school in Little Rock, I learned about the Little Rock Nine in not only history class, but also social studies and civics. It was very much part of our history but also a cautionary reminder to all of us. That education was so important to us, and I wish that was more of how we were teaching important, painful events in history to both of us include the Little Rock Nine in our series."

"I was growing up outside of Chicago," Hillary says, "but I still remember the television coverage and the newspaper photographs of these nine young African American students, who had every right to go to the best high school in our state and what they were subjected to and how hard it was. That was gutsy before we even decided to write a book or do a series."

The series also includes Afghani women fleeing the oppression of the Taliban and resettling in Bentonville with the help of local charity Canopy Northwest Arkansas and reflections from Little Rock's Symone, a winner on Season 13 of "RuPaul's Drag Race."

The series also includes Hillary discussing in detail how her views on LGBT concerns have changed since she was living in the Governor's Mansion and the White House.

"My position has evolved like most people I know who are of my generation" Hillary says. "And I thought that was important to talk about because Chelsea's been one of the guides to my evolving position." 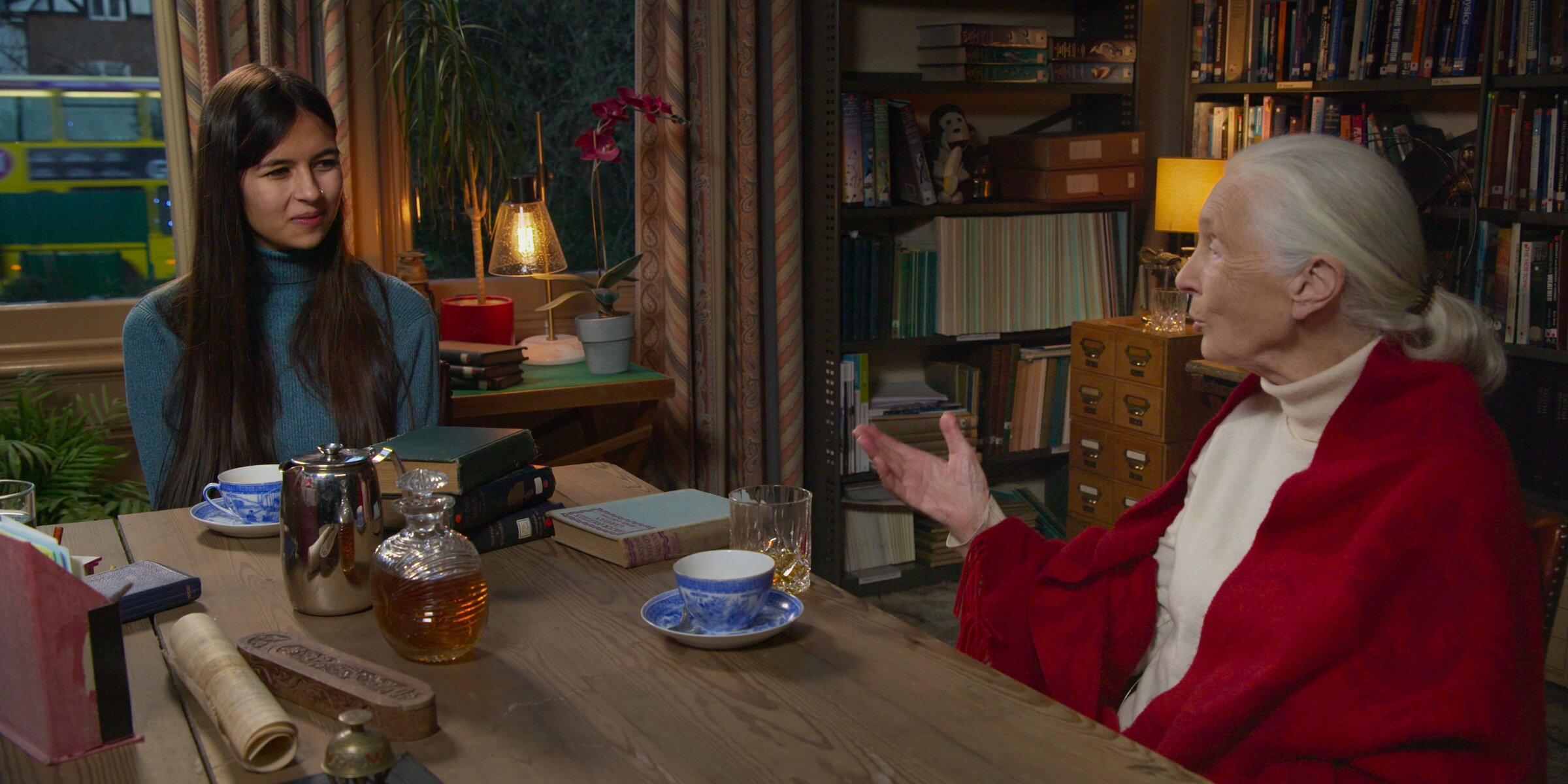