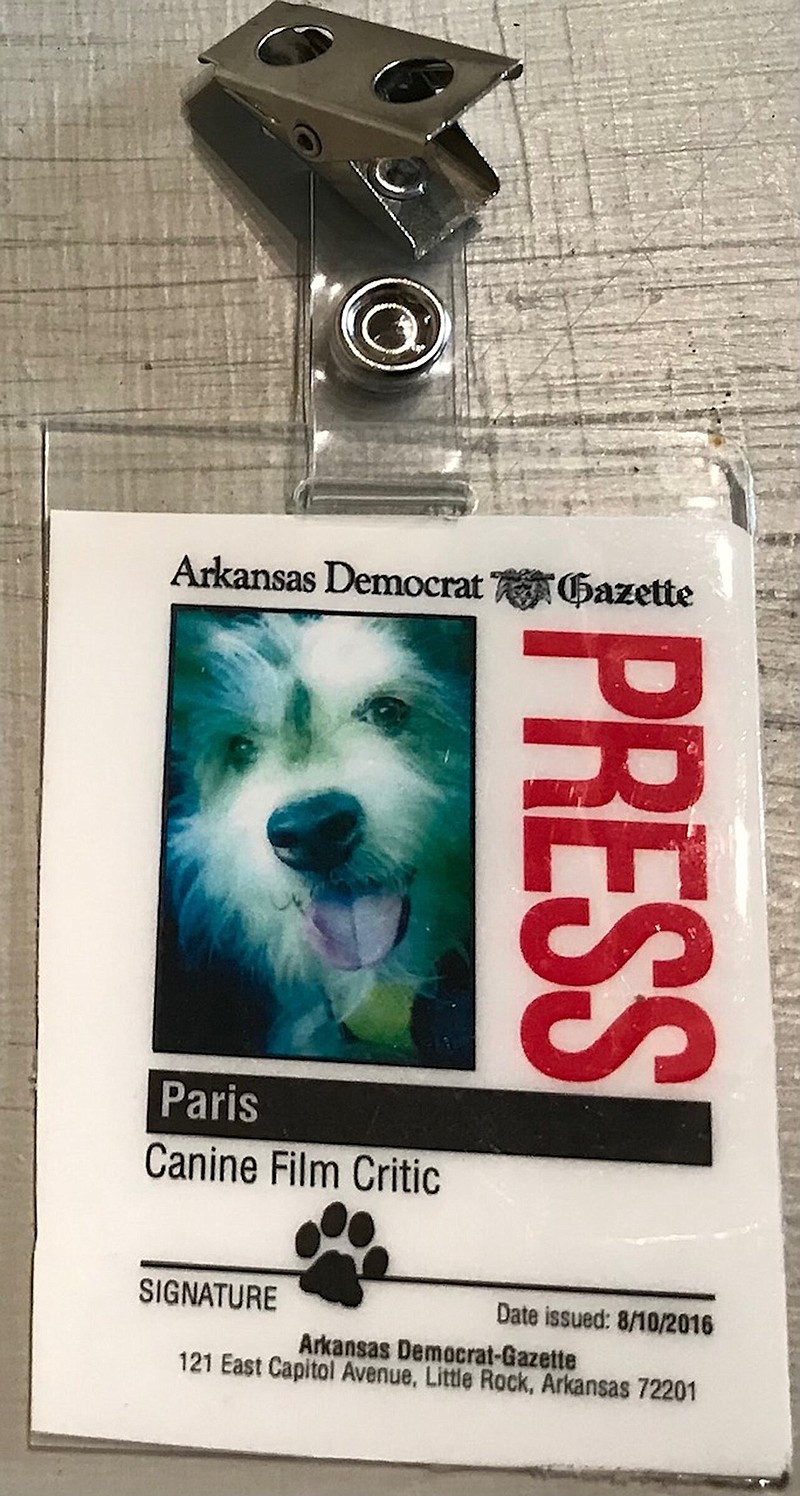 Bestower of pink ponies and frowny faces, Paris hasn’t reviewed a film for us in more than a decade but she keeps her credentials current, just in case.

I'm supposed to be at the Toronto International Film Festival right now.

I'm relieved I'm not, though I was looking forward to becoming re-acquainted with the festival and spending time with our critic Piers Marchant, who is there, and meeting publicists and festival folk with whom I've been communicating these past few weeks. I've been assured that my last-minute cancellation won't affect our ability to be approved for credentials next year, so maybe we'll go back then.

My reasons for not going are personal, but since I've never liked it when writers tease readers with vague intimations, I'll tell you it has to do with the health of a relative who lives in another state and the declining health of our dog Paris.

My relative is younger than me but may have reached a critical stage, and I want to be able to ­grab a flight at a moment's notice if necessary. Being in Canada would complicate things.

Paris is 14 years old and, as some of you may know, we recently lost her sister Dublin. As it turns out, Dublin's sudden death -- we suspect a heart valve failed -- was unexpected, but we've been concerned about Paris for a while. She was uncharacteristically listless, uninterested in eating and losing weight. She seemed tired.

We thought for a while it might simply be the brutal summer heat that had affected her, but a few weeks ago she was diagnosed as anemic, and her vet told us he suspected she had cancer. (It is impossible to tell for certain without invasive surgery.) He prescribed a course of steroids for her, and basically told us to prepare ourselves -- she likely wouldn't make it to the end of the year.

But we had been encouraged lately. The drugs worked. Karen described Paris' reversal as being like those of the patients in the 1990 Penny Marshall film "Awakenings," based on a nonfiction book by Dr. Oliver Sacks. In that film, Sacks' fictional analog, played by Robin Williams, is a neurologist working at a hospital in the Bronx in 1969 who administers the drug L-Dopa to several catatonic patients who survived the 1917–1928 epidemic of encephalitis lethargica.

These patients -- chief among them Leonard Lowe (Robert De Niro) -- miraculously revive, and find themselves given a second chance at life after decades of lying catatonic. But, in the end, the effect is short-lived; the patients slowly sink back into catatonia. It is a sad movie, but is also meant to be inspiring in that it instructs us to embrace those moments when we are fully alive and able to communicate our affection to those we cherish.

For we are all awake for only a little while.

Paris came out of her stupor and is with us yet, though we are seeing signs of her sliding back into her own particular catatonia. She still eats her favorites like peanut butter and bologna, but she's not much interested in dog food. She still goes out on her own, but she doesn't want to come with us on walks unless we set her on her pillow in the Radio Flyer wagon and pull her along, which we will do.

Maybe there will be more times when, as we are heading home, she jumps out of the wagon and walks alongside Karen for a while.

As I write this, she is just outside my second-floor office, sleeping peacefully but breathing hard. She climbed the steps herself.

If you have paid attention to this section for a long time, you might remember that more than a decade ago we pretended that Paris occasionally wrote reviews for us. She handled movies like "Paul Blart: Mall Cop," which she awarded a "frowny face" and said descended "into a cross between 'Die Hard' and X Games 13" and that the film's slipping-down structure paralleled "the decline of American pop culture": "What began as a healthy pulling down of cultural elites and a democratization of forms has devolved into a bunch of silly pratfalls performed by marginally talented cynics who have no respect for themselves, much less the rubes who pay to watch their shallow and crude spectacles."

After that review ran, somebody wrote a letter to the editor saying they had lost all respect for me for allowing my 8-year-old daughter to write movie reviews.

Paris was kinder to "The Smurfs," which she awarded "three pink ponies" and to Ron Howard's 2009 "The Da Vinci Code" sequel "Angels and Demons," which only got two pink ponies but which she praised as a "meticulously researched silly thing."

"I don't believe for a minute that anyone associated with this film ever took any of it seriously," she wrote. "After all, Opie is the boss of this movie!"

I don't know why Paris' reviewing career didn't continue; I would have liked her thoughts on "Isle of Dogs." But writing in her (fictive) voice was harder than you might suppose, and in the end we didn't have enough stupid but harmless movies to write about. And there were too many people who didn't get the joke.

I don't know that I should be writing about this, but nothing else is on my mind. Paris is fine, Paris is good. Paris is sleeping now, but in a minute I'm going to carry her outside in the sunshine and let her walk around. She'll lift up her nose and sniff the air and take in all she can, while she can, which is all any of us can ever do.