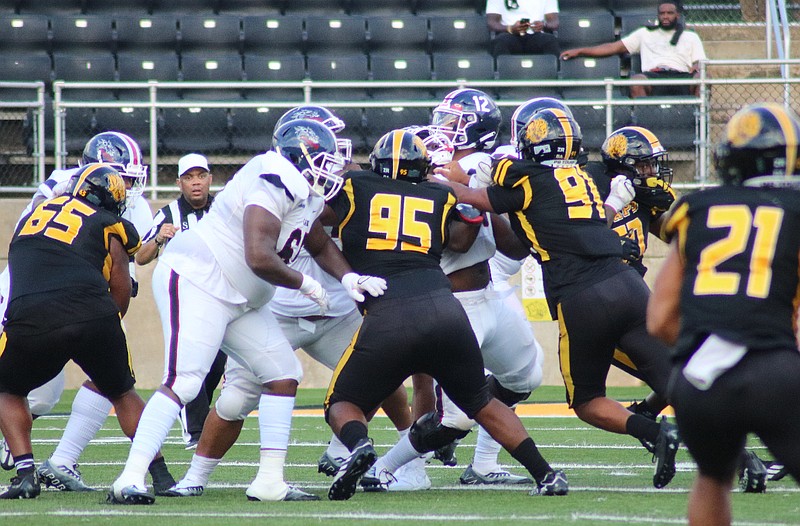 It was only one game, but the University of Arkansas at Pine Bluff defensive line established itself as a sack machine last Saturday.

UAPB sacked Lane College quarterback Michael Huntley four times, none bigger than in the final 2 minutes, when nose guard JaVonn Gray stopped him for a 13-yard loss on fourth-and-6 near midfield. The Golden Lions ran out the clock and hung on for a 48-42 victory.

"I think it sets a foundation for us, as far as defensive performance and setting expectations," defensive co-coordinator and line coach Thomas Sims said. "We had some guys step up at critical times for us, as well. That was a positive we took from the game."

Gray is a junior starter on the Lions' defensive front four. Earlier in the game, a true freshman backup end made an immediate impact on the game.

Anas Luqman played a large amount of snaps and recorded 1.5 sacks in the first half. Lane earned two first downs on a drive while trailing 17-7 before Luqman stopped Huntley for a loss of 7 yards. (Huntley then regained composure and threw a 45-yard strike to the UAPB 1, and the Dragons scored the following play.)

Luqman shared his second sack with tackle Kenny Clark later in the half, forcing the Dragons to punt. UAPB capitalized with a touchdown to expand its lead to 27-21.

"Coach Sims called a good couple of pressures," Luqman said. "The DBs [defensive backs] did their part for us holding them back there, and I just had to do my part and get back there."

UAPB's defense rose to the occasion midway through the third quarter when Lane threatened to narrow a 41-28 deficit. The Lions came up with a goal-line stand, stopping running back Ike Brown on four straight runs.

"The offensive line pretty much worked me all summer," he said. "They get me a lot better with how they block and stuff. They help me out with stuff, like with how linemen are going to move."

Luqman chose UAPB after establishing a bond with Sims, who was hired in the spring.

"He's a bright kid and a quick learner," Sims said. "That's something I recognized in him in the summer right away. You explain something to him and tell him what you want done, not that he gets it perfect, but he's going to try to do what you tell him to do, which is definitely a bonus."

The challenge now for Pine Bluff's sack machine is to carry the defensive intensity through the following 10 games. The Lions will be back in action at 6 p.m. Saturday to host North American University of the Houston area.

"It starts in practice," Sims said. "We have to understand that we'll have to carry a significant load of our defense and of our football team more consistently every week in order for us to have the success that we want."