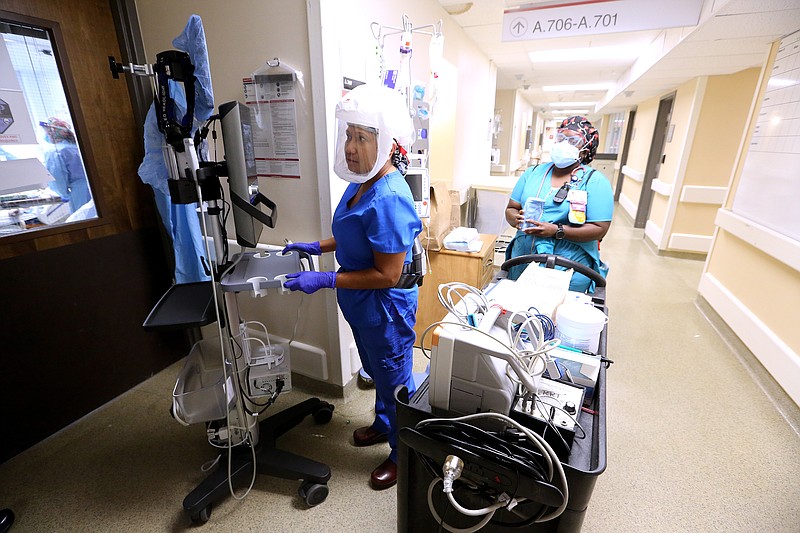 A week-over-week decline in Arkansas' new coronavirus cases, possibly stemming at least in part from lower testing over Labor Day weekend, continued for a third day Thursday as the number of covid-19 patients in the state's hospitals fell for the second day in a row.

The state's death toll from the virus, as tracked by the Department of Health, rose by seven, to 11,951.

The state's count of cases rose Thursday by 1,143.

While larger by 101 than the rise Wednesday, it was down by 180 compared to the increase the previous Thursday.

McNeill said a slowdown in testing and reporting around Labor Day, which caused Tuesday's new case number to be unusually small, could have also affected the numbers Wednesday and Thursday.

Whether the holiday would result in an uptick in new cases, as other holidays have, remained to be seen.

"It is possible that gatherings over the weekend could result in a moderate increase in cases, but we will have to watch the data over the next few days and weeks to see if there is an impact or not," McNeill said in an email.

Falling for the third day in a row, the average daily increase in the state's case count over a rolling seven-day period fell Thursday to 797, the first time it had been below 800 since the week ending June 23.

With new cases outnumbering recoveries, however, the number of cases in the state that were considered active rose by 15, to 10,972, after falling the previous four days.

Infections among Arkansans age 18 and younger, who represent about 24% of the state's population, accounted for about 31% of the state's active case total as of Thursday, down slightly from about 32% a week earlier but still up from 24% as of Aug. 25.

After dropping by five on Wednesday, the number of covid-19 patients in the state's hospitals fell Thursday by four, to 272. That was still up from the two-month low of 261 that the number reached Monday, however.

Pulaski County had the most new cases, 165, on Thursday, followed by Washington County with 74 and Faulkner County with 66.

Growing for the third day in a row, the number of the state's virus patients who were in intensive care rose Thursday by four, to 46.

The number on ventilators fell by two, to 11, after rising the previous three days.

At its hospitals in Little Rock and Springdale, Arkansas Children's had 17 covid-19 patients Thursday, down from 20 on Wednesday and 23 the previous Thursday, spokeswoman Hilary DeMillo said.

Meanwhile, after rising by three a week earlier, the number of Arkansas counties where the U.S. Centers for Disease Control and Prevention recommends people wear masks in indoor public places fell almost in half Thursday as a result of a weekly update to the agency's map of "covid-19 community levels."

The levels -- low, medium and high -- are based on weekly numbers of new cases, hospital admissions for covid-19 and the percentage of staffed hospital beds that are occupied by covid-19 patients.

Reflecting declines in new cases, hospital admissions or both, the number of counties labeled as having a high covid-19 level -- triggering the recommendation to wear masks -- fell Thursday from 28 to 15.

The level fell from high to medium in Bradley, Clay, Cleveland, Conway, Desha, Drew, Izard, Lonoke and Sharp counties and from high to low in Fulton, Independence, Jefferson, Logan and Stone counties.

In one other county, Grant, an increase in new cases caused the level to go from medium to high.

Overall, the number of counties with a low covid-19 level rose by 16, to 38, while the number with a medium level fell by three, to 25.

Among the state's most populous counties, the level remained medium in Pulaski and Saline counties, low in Benton County and high in Faulkner and Craighead counties.

In Washington and Sebastian counties, the level fell from medium to low.