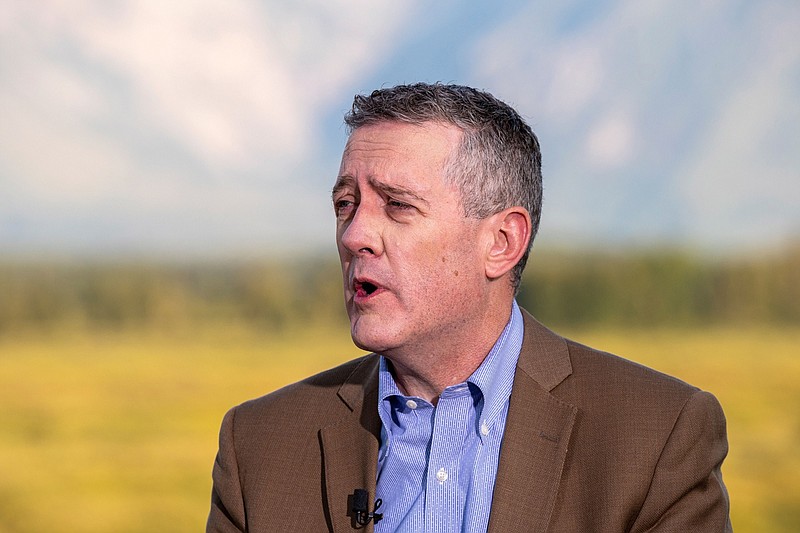 James Bullard, president and chief executive officer of the Federal Reserve Bank of St. Louis, speaks during a Bloomberg Television interview at the Jackson Hole economic symposium in Moran, Wyoming, on Aug. 26, 2022. MUST CREDIT: Bloomberg photo by David Paul Morris

Federal Reserve Bank of St. Louis President James Bullard says he is more supportive of a third straight 0.75 percentage-point interest rate increase and that Wall Street is underestimating the likelihood of the central bank holding rates at higher levels next year.

"I was leaning toward 75 [basis points], and the jobs report was reasonably good last Friday," Bullard, whose district includes Arkansas, said in a Bloomberg News interview late Thursday in St. Louis.

And while the consumer price index may show progress when it's reported next week, "I wouldn't let one data point sort of dictate what we are going to do at this meeting," he said. "So I am leaning more strongly toward 75 at this point."

Fed officials meet Sept. 20-21, and investors are expecting another significant move -- following 0.75 percentage-point increases in June and July -- after Chair Jerome Powell stressed Thursday that the central bank will not flinch in its battle to curb inflation.

"Inflation is far too high, and it is too soon to say whether inflation is moving meaningfully and persistently downward," Waller said Friday in remarks to the Institute for Advanced Studies in Vienna, Austria.

"While I welcome promising news about inflation, I don't yet see convincing evidence that it is moving meaningfully and persistently down along a trajectory to reach our 2% target," he said. "Until I see a meaningful and persistent moderation of the rise in core prices, I will support taking significant further steps to tighten monetary policy."

Bullard reiterated that he favored getting the Fed's target rate to 3.75% to 4% by year's end and hasn't decided what rate path he would prefer for 2023. But he said markets' pricing of potential rate cuts in the second half of 2023 may be misjudging how sticky high inflation is and the Fed's commitment to lower it to the 2% target.

"I have felt Wall Street is underpricing the idea that inflation may just be relatively high and it may take quite a while to bring back to 2%," Bullard said. "This would mean interest rates have to be higher for longer. That's a scenario that is not garnering enough attention in today's market pricing."

U.S. central bankers are raising interest rates rapidly after being slow to respond when price pressures started to get out of hand. Powell has kept the option open for another 0.75 percentage-point move this month and has said the decision depends on the "totality" of the incoming data.

An important piece of evidence will drop Tuesday with the release of the consumer price index report for August.

Bullard said a lower inflation report would be welcome, though not decisive for near-term monetary policy. The CPI is expected to decline 0.1% for the month, while a core measure that excludes food and energy prices may have risen 0.3%, according to economists surveyed by Bloomberg.

"Hopefully it will go in the correct direction, which is lower, and that will be helpful," Bullard said. "We are going to need to see more sustained, longer-run evidence. Not all the future reports will go in the right direction. Some will go up and some will go down. We understand we are going to have to have a preponderance of the data in favor of the view that inflation is clearly coming back on multiple measures to 2%."

While some economists have been encouraged that the labor market could be showing signs of progress with a surge in participation last month, Bullard noted the trend in participation over two decades has been lower and that August could have been affected by seasonal adjustment of data with students returning to school.

Anecdotal reports, including from the St. Louis Fed board meeting Thursday, support the notion that the job market remains overheated, he said.

"There is just a lot of trouble hiring," Bullard said. While some firms are generating somewhat more job applications, "This isn't very comforting on the big picture. You still have to pay up if you want to get labor. That sounds like a lot of wage pressure."

Bullard said he would meet with staff advisers before deciding on his forecast for 2023 interest rates as part of the Fed's quarterly forecasts, which will be updated this month, but he said he was hopeful that the catch-up phase of policy would be over.

"We are just trying to get to a level of the policy rate that makes sense for this environment and from there we will be able to make judgments based on the data, whether to go up or down," Bullard said.

"We have to get to the right level of the policy rate," he added. "And then, at that point, it's kind of ordinary monetary policy: You might adjust up somewhat because the data came in unfavorably for your goals or keep it the same because you are about on track or decrease a little bit because the data has come in favorably for your goals. To me, that is kind of ordinary monetary policy."

Information for this article was contributed by Steve Matthews, Craig Torres and Jonnelle Marte of Bloomberg News.