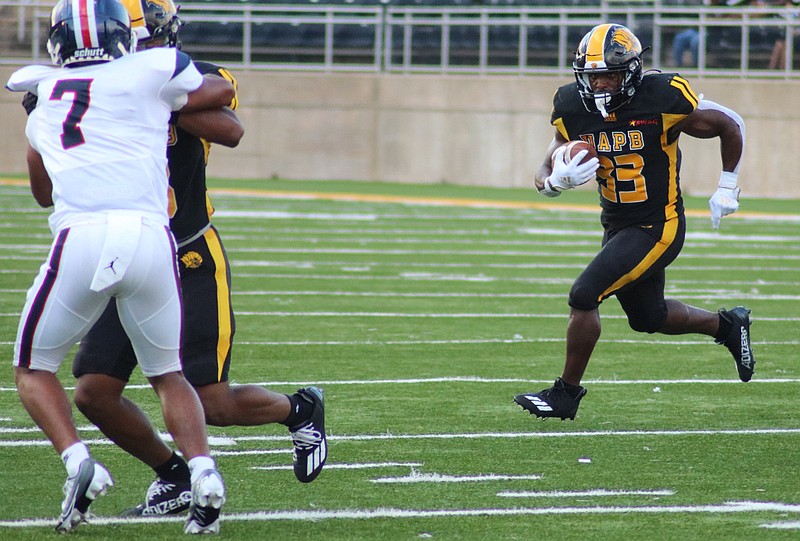 UAPB running back Kayvon Britten follows a block and finds an open hole during last Saturday's win over Lane College at Simmons Bank Field at Golden Lion Stadium. (Special to The Commercial/Jamie Hooks)

The last time a University of Arkansas at Pine Bluff player rushed for 200 or more yards before last Saturday, the Golden Lions competed in the National Association of Intercollegiate Athletics.

Kayvon Britten's 237 yards against Lane College is the best single-game output in the NCAA Football Championship Subdivision so far, but it's not cause for the sophomore to even think about slowing down as a new addition to the NAIA, Houston-area North American University (0-2), storms into town.

"The game is past me now," Britten said. "I'm really looking forward to Saturday and having another good game for my team."

"It gives me more fuel to motivate myself for the next game," Britten said. "I'm ready, honestly."

Britten and the Golden Lions will go for their first 2-0 start to a fall season since 2000 -- they started the spring 2021 campaign 4-0 -- against the Stallions starting at 6 p.m. tonight at Simmons Bank Field at Golden Lion Stadium.

Based in Stafford, Texas, North American is a 15-year-old school that's two games into its first season as a member of the National Association of Intercollegiate Athletics. The Stallions lost their season opener at Southeastern University of Florida 54-13 and then were shut out by NCAA Division II program Texas A&M University at Kingsville 60-0.

"They're much better than they were a year ago. We watched film on them against Texas Southern and compared the two [seasons]," Gamble said. "For us, we're trying to make sure we're better from Week 1 to Week 2. We're trying to hone in and make sure we're sharpening in the areas where we need to get better at."

The Lions won their third straight meeting with Lane but had to win an offensive foot race to hold off the Dragons, allowing them to a total 511 yards while netting 521 themselves. Turns out, UAPB needed each of Britten's 3 touchdowns.

With Big 12 power Oklahoma State University a week away, UAPB Coach Doc Gamble intends to have no issues keeping the Lions focused on the matter at hand.

"Our coaching staff hasn't let anybody overlook any opponent," Gamble said. "We're not in a position to overlook anybody. We've got one win, and our goal this week is to go 1-0. That's the way our focus has to be. I don't hesitate reminding anybody, 'Hey, we're not in that position where we can look past anybody. Our most important is the team we're going to face Saturday."

What little is known about North American can be discovered through recent box scores. The Stallions were shut out in the first half at Southeastern, and quarterback Randal Moore completed just 17 of 46 passes for 169 yards.

Kingsville outgained North American 569 yards to 240 yards, each team almost running exactly the same number of plays. Two lost fumbles and five punts by the Stallions did nothing to help their cause.

Gamble plans to reach deep into his roster and play more reserves tonight as a way to build depth for the rest of the season.

That could mean Britten doesn't rush 31 times, as he did against Lane. But the work he put in can be attributed to the consistent approach he takes to the game.

"My job as a running back is always to get as many yards as I can and first downs," Britten said. "You always want to get first downs as an offense. Everything was just rolling."