IN THE GARDEN: Hibiscus mutabilis, or Confederate rose, should bloom in late fall — barring an early frost 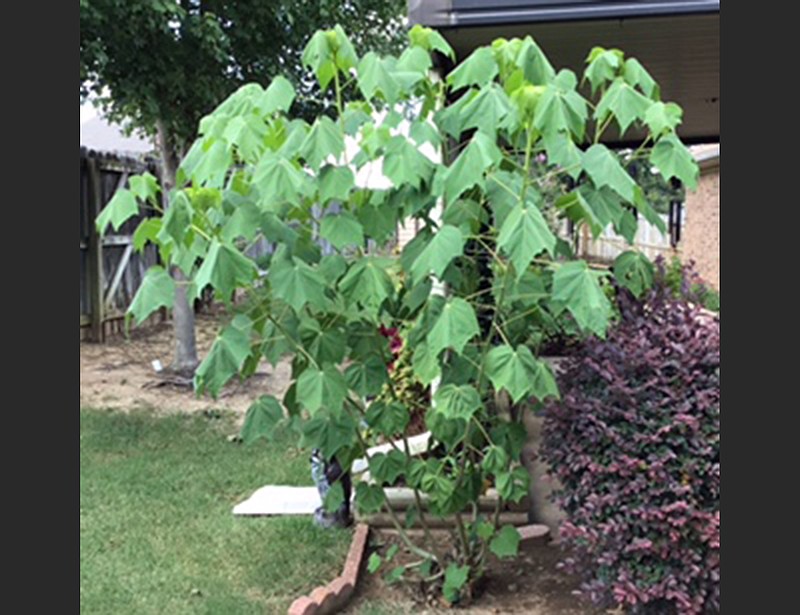 Q: I planted this hardy hibiscus (aka Dixie rose mallow) in late spring of last year. So far it has made no buds or blooms but has grown to approximately 7 to 8 feet tall both summers. It gets morning shade with lots of afternoon sun and is kept watered. What can I do to get blooms?

A: The hibiscus plant you are growing is commonly called Confederate rose or Hibiscus mutabilis. It doesn't bloom until late fall, usually from October into early November. I am surprised it didn't bloom last year, since we had a particularly late first frost. Sometimes an early frost can zap them before they bloom. As long as it gets half a day of sunlight, it should flower this fall. Keep your fingers crossed. It has the species name mutabilis because the blooms change from pink to white or white to pink in the course of the day, depending on the variety. It does grow large in one growing season, but in Arkansas, it dies back to the ground after a killing frost. It is not reliably hardy in the northern tier of counties.

Q: We have a plum thicket on our farm where the trees are getting old. This year it bore very little fruit. We were able to get some seeds and are letting them dry. How do we pot these seeds?

A: You can grow plums from seed, but the resulting fruit could be different than the parents, since plum trees do cross-pollinate. It also can take five to 10 years from seed to fruiting age. A quicker method would be to buy some young plum trees and then graft some cuttings on to the root stock to get the variety you have. To answer your question: Store the seeds in a plastic bag filled with sterile, moist potting soil in the refrigerator for the winter. Then pot them up and see what sprouts. They need at least three months of cool, moist storage (stratification) before the seeds will sprout.

Q: Can grapevines be mulched and not interfere with the growth and maturing of the grapes?

A: Yes, grapes would benefit from a layer of mulch. It will conserve moisture and help to keep the weeds at bay. It will not hurt production at all.

Q: I went on vacation the last 10 days, and I thought the weather had finally broken and changed my sprinkler system settings. I was wrong, and many of the plants in my garden look pretty sad now. Is there anything I can do to give them a boost to help them last a little longer this season?

A: I think we all thought the tide had changed when we finally got rain and cooler weather, and then the heat crept in. Several times it looked like rain, but at least in my yard, that passed us by. If you have leggy but living summer annuals, give them a light haircut, water and fertilize and see if they don't bounce back. If your perennials have dropped a lot of leaves, start cleanup. Some may bounce back, but others may be ready to rest until next spring. For spring-blooming shrubs and trees, just water. They are setting or have set flower buds for next year. Luckily, fall and winter color is arriving at garden centers and nurseries every week. Now is a great time to replant the vegetable garden and start planting fall and winter color. Let's hope cooler, less humid weather is here to stay.

Several readers wrote in about cutting back their peas and getting a second crop, or in some cases a better crop. Here is one example:

"My grandmother lived outside of Des Arc in the river bottoms and grew three acres of peas every year. People would come from all around the area to pick Hattie's peas. They were big field peas that were delicious. She called them California Creams, but I've never run across a variety by that name. When she died, I found several frozen seed bags in her freezer and planted them for several years. I gave a bag to my sister and she began planting them this year.

"They did mow them on the highest setting if they had a year where the peas were more vines than blooms. It worked, and the plants bounced back quickly.

"My grandfather swore by planting by the moon, but my grandmother didn't. He claimed that the years they had to mow them was because Hattie ignored the moon."