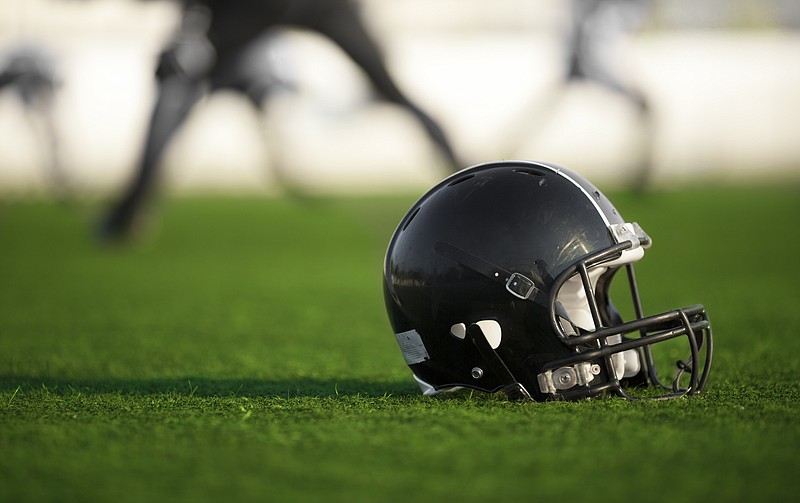 GREENWOOD -- A pump fake had Greenwood senior running back Javon Williamson wide open for a potential touchdown pass, but the ball went off his hands for an incompletion. He more than made up for it on his next opportunity.

Williamson caught his next pass on the same drive in the first quarter and muscled his way in for a 17-yard touchdown. Greenwood didn't look back from there in a 49-0 victory over Mountain Home in the teams' 6A-West Conference opener.

Williamson wasn't fazed by the drop with the help of his teammates picking him up.

"My whole team told me when I got back to the sidelines to keep my head high," Williamson said. "I was going to beat myself up about it. But they got my head right. It made sure I was ready for the next one. It made for a nice highlight and it was good to make up for it."

Greenwood (2-1, 1-0) was playing without running back Jake Glover because of injury, so it turned to Williamson on Friday night at Smith-Robinson Stadium.

He opened the game's scoring with a 14-yard touchdown run for a 7-0 Greenwood edge. He then redeemed himself with a 17-yard touchdown catch and also punched it in for a 1-yard rushing score to give Greenwood a 35-0 lead late in the second quarter.

"I was glad to step up for the team when they needed me with some guys out," Williamson said. "It's about next man up. I wanted to come out here and do my job for my guys."

Count Greenwood coach Chris Young among those glad to see Williamson making an impact after missing time last year with an injury.

"He has worked his tail off to get back after he broke his leg last year, so it is awesome to see him out here helping us win in his senior year," Young said. "He made some great runs and busted some tackles. It was nice to see him get in the end zone."

The Bulldogs needed heroics to avoid their first 0-2 start to a season since 1994 last week. That wasn't the case to open up conference play. Greenwood cruised to a 42-0 halftime lead with the offense scoring six consecutive touchdowns.

Williamson finished with 10 carries for 50 yards and 2 touchdowns. He also caught 3 passes for 22 yards and a score. Quarterbacks Hunter Houston (21 of 29 for 192 yards and 3 touchdowns) and Kane Archer (7 of 16 for 72 yards with a passing and rushing touchdown) triggered the offense.

Mountain Home (0-3, 0-1) was led by Chris Hubbard who finished with 46 yards on three carries.

The Greenwood offense had plenty of highlights, but the defense matched them in success. The unit finished the game with five turnovers with two fumble recoveries and three interceptions.

"The turnovers were awesome," Young said. "We were minus-seven and we have never been at that through the first two games. They did a good job catching us back up. Hopefully we can get back into the positive numbers next week."

The Bulldogs got interceptions from Josh Allen, Landon Nelms and Caden Nelms, who caught his with just one shoe. Both of the fumble recoveries came from Riley White.

"He is a great kid and plays with a high motor," Young said of White. "He really moves around. He does that every game. He continues to improve and is at the right place at the right time. He makes stuff happen and is just three games into his junior season."

Greenwood had 37 plays for 299 yards at halftime, while Mountain Home was limited to 83 yards on 28 plays.

The Bulldogs were able to find success after the break as well. Archer found Arrington for a 9-yard touchdown pass in the third quarter to set the final margin.