Arkansas State at Ohio State: Stranger things might have happened, but not that many 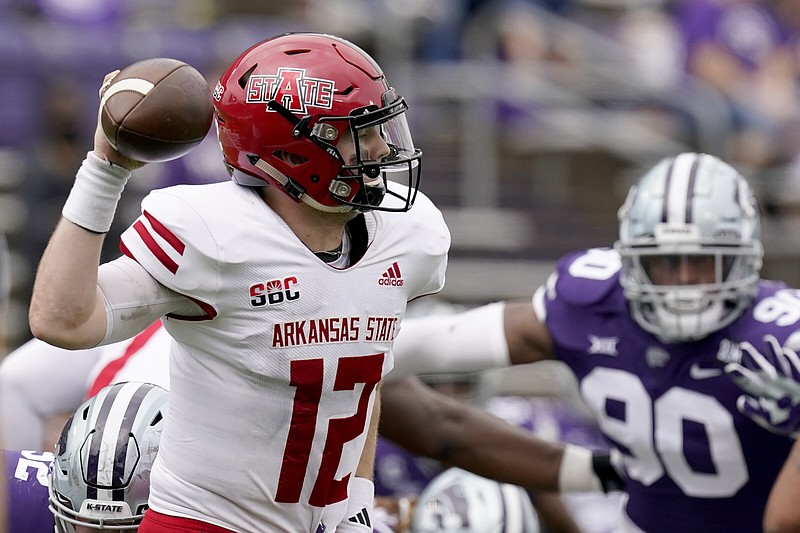 Logan Bonner threw for 204 yards and two touchdowns in Arkansas State’s 35-31 victory at Kansas State in 2020. That game is an example of one of the times the Red Wolves, who play today at No. 3 Ohio State, have managed victories against power-conference opponents. (AP/Charlie Riedel)

COLUMBUS, Ohio -- There aren't many winning blueprints for 40-plus-point underdogs.

According to the Action Network, there have only been two such upsets in college football since 1980 -- Howard's win against UNLV in 2017 as a 45.5-point underdog and Stanford's 2007 victory over Southern Cal as a 40.5-point underdog.

So the path for Arkansas State to join that exclusive club today against No. 3 Ohio State is quite narrow. ASU is a 44 1/2-point underdog to the Buckeyes, but it's not as if the Red Wolves have always been cakewalks for power-conference opponents.

In 2008, ASU went to Texas A&M's Kyle Field and stunned the Aggies 18-14 behind four field goals by Josh Arauco. And it was only two years ago that the Red Wolves upset Kansas State 35-31 on the road.

Although that 2020 victory at Manhattan, Kan., was sandwiched between a trio of thrashings at the hands of Alabama (2018), Georgia (2019) and Washington (2021), memories of that day linger with those who were in uniform for the Red Wolves, like defensive tackle T.W. Ayers.

"It's kind of a relief whenever everybody's counted you out," Ayers said Tuesday. "You aren't playing [with] any pressure. You just get to go out there and it's like you're playing ball when you were a kid, just out there having fun."

There's been a lot of turnover since 2008 -- both at ASU and in college football at-large -- but a glimpse at the Red Wolves' 2020 win at Kansas State and their 2017 loss at Nebraska gives hints of the recipe needed for an upset.

In both games, ASU scored 30-plus points, neared 500 yards of total offense and registered a better than 50% conversion rate on third downs.

Just to even try to compete with one of the national's perennial powerhouse programs, the Red Wolves' offense will have to go back to the well.

"When you look at where they're transferring from, they're very respectable programs. It'll be a good challenge." Ohio State Coach Ryan Day said on his radio show this week when asked about ASU's power-conference transfers. On the offensive side of the ball alone, ASU will feature six players who began their collegiate careers in the Power 5 ranks.

That group includes quarterback James Blackman (Florida State) and running back Brian Snead, who Day helped recruit to Ohio State in 2018 before Snead was dismissed from the school following sexual assault allegations.

Also among them is wide receiver Champ Flemings. Coincidentally enough, he made his Oregon State debut on Sept. 1, 2018 opposite Snead when Flemings' Beavers met the Buckeyes in Columbus, Ohio.

With the status of another former transfer wideout, Te'Vailance Hunt (TCU), still in doubt, Flemings will likely again be a significant piece of the Red Wolves' offensive puzzle.

ASU will need him to be unafraid of the big stage. Flemings himself isn't concerned.

"I'm not too worried about the crowd noise or the hundreds of thousands of people and whoever's in the other color jerseys," Flemings said Tuesday, reflecting on his experience playing in the Pac-12. "I'm going into the game with a lot of confidence, and I hope ... the confidence that [the ASU veterans are] able to exude going into this week of practice and our preparation rubs off on some of the younger guys."

Arkansas State at No. 3 Ohio State

NOTEWORTHY Today’s game will mark ASU’s sixth all-time matchup against a top-five opponent — the Red Wolves’ last came in a 55-0 loss at No. 4 Georgia on Sept. 14, 2019. … Five Ohio State players were recognized by The Associated Press as preseason All-Americans including quarterback C.J. Stroud and wide receiver Jaxon Smith-Njigba. … ASU and Oklahoma are the only FBS programs with 15-plus consecutive seasons scoring at least 50 points in a game. … Red Wolves defensive coordinator Rob Harley was a safety on the Buckeyes’ 2002 national championship team.

Print Headline: Stranger things might have happened, but not that many