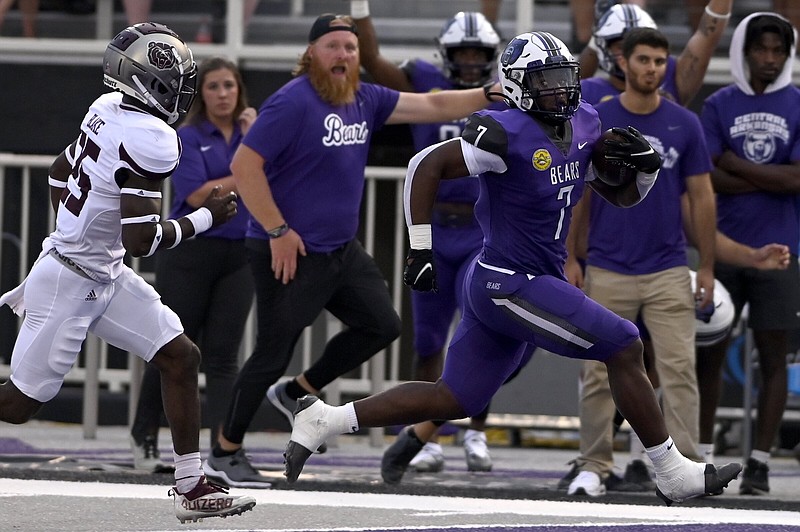 Kylin James and Central Arkansas will travel to No. 22 Ole Miss tonight in the Bears’ first matchup against a Power 5 opponent since they played Kansas State in 2017. (Arkansas Democrat-Gazette/Stephen Swofford)

Today's game against No. 22 Ole Miss is much more than a Week 2 nonconference matchup for the University of Central Arkansas football team. It's a chance to look at how far the program has come in the 10 years since the two last played.

When UCA last made its way to Oxford, Miss. it was five years removed from its move to the Division I level. The Bears had just made their first Football Championship Subdivision playoff appearance, losing in the second round.

A decade later and the Bears (0-1) have made four FCS postseason appearances, and they are preparing for the inaugural season of the Atlantic Sun Conference.

"We don't even look like the same place we did 10 years ago," UCA Coach Nathan Brown said. "We've changed how we go about things. I think as a program we've established ourselves as a consistent top-20 program at the FCS level."

UCA lost that 2012 game 49-27 in the first week of the season. Ole Miss quarterback Bo Wallace threw for two touchdowns and ran for another to start UCA's season with a loss.

"Our last time down there was a great experience," Brown said. "Obviously, we came away with a loss, but we really competed hard. And that was in a time of trying to really establish our program as a Division I program."

Today's game will be the first Power 5 opponent the Bears have faced since a Week 1 game against Kansas State in 2017. UCA Athletic Director Brad Teague has made a point of getting this level of opponent onto the schedule.

UCA has games with Oklahoma State (2023), and Missouri (2025) scheduled in the near future. But there has been some hesitancy on the part of Power 5 schools to schedule out further than that with the uncertainty surrounding conference realignment.

Since the last time UCA and Ole Miss faced off, Mississippi has become a recruiting hotbed for the Bears. Central Arkansas' current roster features 17 Mississippi natives, and the coaching staff has multiple as well.

Brown said he's going into today's game with the hope of winning just like any other game. But he also mentioned that there is a lot more to gain from a game in Mississippi for UCA than the final score.

CENTRAL ARKANSAS AT NO. 22 OLE MISS