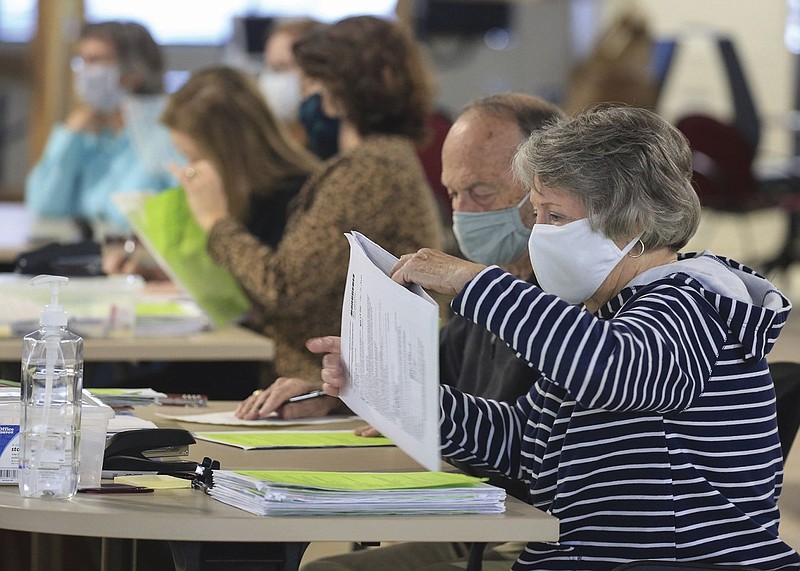 Poll workers process provisional ballots in the Dec. 1, 2020 general runoff election in Little Rock at the Pulaski County Election Commission in this Dec. 10, 2020 file photo. The provisional ballots were approved for counting by the commission and were tabulated the next week. (Arkansas Democrat-Gazette/Staton Breidenthal)

FAYETTEVILLE -- In the midst of preparing for the Nov. 8 election, county clerks and election officials across Arkansas are dealing with a spate of Freedom of Information Act requests for records from the 2020 election.

"Pretty much everybody is talking about it," Faulkner County Clerk Margaret Darter, a Republican, said Thursday. "All the county clerks are discussing how to handle it. The smaller counties especially, they're getting overwhelmed."

What has become the hot topic among county clerks is a series of requests, mostly by email, asking for reports from the 2020 general election. Most of the requests ask for a "cast vote record" or "ballot manifest" report. Other names are sometimes used and the requests do sometimes seek other information.

Darter said her county has dealt with "many, many" requests, each of which has to be read, considered and answered separately. She said one request went further and asked for election records from 20 years ago. Other clerks report similar problems, she said.

One email received by Washington County election officials indicated the information being sought included "listing, in the sequence processed by the county, every ballot, its sequential ID, its timestamp, its method of voting (for example: in-person, mail-in, provisional, absentee, "other", etc. – any ballots that were tabulated as part of the 2020 General Election), the specific votes contained for all races, and the batch ID and tabulator ID. Should any fields not be available, please include the fields which are. To be clear, I am NOT requesting a summary report of votes, I am requesting a perballot report. This set of information is sometimes known as a 'Cast Vote Record' (CVR), 'ballot log', or a 'summary of ballots'."

Multiple requests received by Benton County election officials included identical language making the same request. Some of the emails contain instructions on how to request the information. Those instructions say the records being sought "are the clearest indicators of whether or not there is machine-based election fraud."

Benton County Clerk Betsy Harrell, a Republican, said the requests are frustrating, time-consuming and distract election officials and staff from preparing for the Nov. 8 election. Harrell also said she has had people making the request in person who have challenged her integrity and that of her staff and election workers, which she finds insulting.

"I tell people they need to turn off the TV or the internet and focus on what's happening here locally," Harrell said. "We have people who have devoted years to making sure we have free and fair elections. You go to church with these people. They are your kids' baseball coaches. There are not total strangers or people we don't know coming in to handle these elections.

"If you're saying there are irregularities, I'd like to know what they are," Harrell said. "Kim [Dennison, the county's election director] has been here for 12 years working on our elections. We have security camera footage on the doors where the machines are stored. We have a record of every badge that's scanned in and scanned out. People have devoted years of their lives to this and their integrity is being questioned by someone who doesn't know what we do here. It's maddening.

"I try to keep it from being a distraction which is why I answer as many of the requests as I can myself," Harrell said. "We are a program-your-own-election county so Kim is right in the middle of programming for the 2022 election. But she had to take off and go to Fayetteville to meet about these requests and what information is available and how we can meet the requests as best we can. That took half a day, which she should have been spending programming."

Harrell said Benton County doesn't have the cast-vote record reports, and the software used by the county in 2020 didn't preserve that information. Newer software the county is using now can preserve that information, she said. Harrell and Dennison checked with Election Systems & Software, the company that makes the voting machines used in Arkansas, and the company confirmed the 2020 election software didn't create those reports.

Jenifer Price, Washington County's election director, confirmed the reports being sought don't exist in Washington County for the 2020 election. Both Price and Harrell said some of the information being sought might not be available in any form if it could identify how individual voters marked their ballots.

In some smaller precincts, both said, the small number of ballots cast, along with information about the time, place and manner in which they were cast, might identify the ballots of individual voters.

"I'm not going to release any information that might violate the privacy of our voters," Harrell said.

Darter said information in one of the email requests she received included a link to a website for LindellTV, which features videos by Mike Lindell, the CEO of My Pillow, who has promoted claims the 2020 presidential election in which Joe Biden defeated Donald Trump was fraudulently decided.

Lindell is one of the defendants in a series of lawsuits filed by Dominion Voting Systems over claims made about the company's voting machines after the 2020 election. Other defendants include Fox News and Newsmax, as well as Rudy Giuliani and Sidney Powell, both attorneys who worked for Trump.

Officials in those states also say the requests follow the same format and use the same language, often with the same spaces meant to identify the county or other jurisdictions left incomplete. Many of the Arkansas requests also left out the name of the county from which records were being sought.

Max Deitchler, a member of the Washington County Election Commission, said he has received a number of the email requests and they are all largely the same. Deitchler is a Democrat. County election commissions in Arkansas are made up of representatives of the two major political parties with the party holding the majority of the state's constitutional offices, currently the Republican Party, having two representatives and the minority party, currently the Democratic Party, having one representative.

"Some of them I don't know if the person is a resident of Arkansas or not but it's obvious they are all copies of the same request," Deitchler said. "It's clear that they are all stemming from Trump's big lie that fraud was so prevalent in the 2020 election so I don't expect it to stop any time soon."

Deitchler said if anyone seriously wants to learn about Arkansas elections and the election process, he would invite them to learn about it in person.

"We would welcome them to come to any of our open, public meetings where we share information about our elections and the election process," he said.