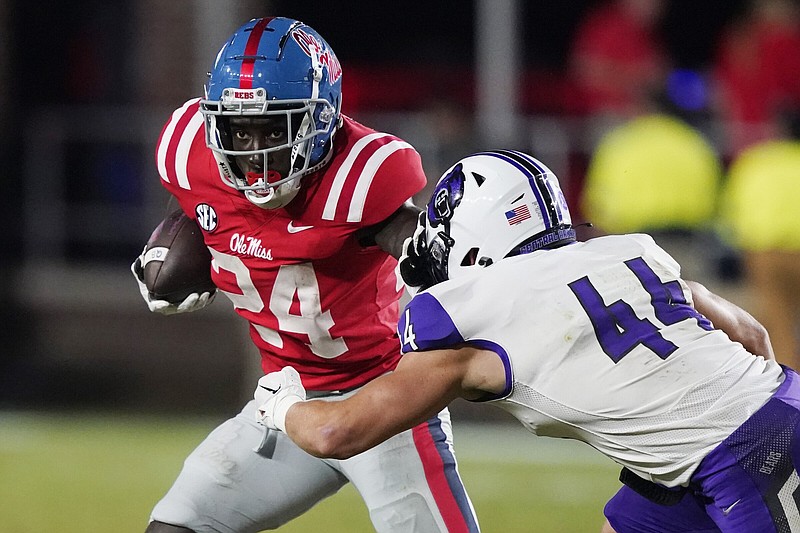 Ole Miss running back Ulysses Bentley IV (24) fights off a tackle attempt by Central Arkansas linebacker Jace Benesch (right) during the second half of the No. 22 Rebels’ 59-3 victory over the Bears on Saturday in Oxford, Miss. (AP/Rogelio V. Solis)

It was designed as a simple rush up the middle, but all he could see was a wall of defenders with nowhere to go.

That's how most plays felt for the University of Central Arkansas against No. 22 Ole Miss. Just about every time the Bears looked up, there were bright red Rebels jerseys.

The Rebels (2-0) won the opening coin toss and opted to receive. They cruised down the field for the opening score on a pass from quarterback Luke Altmyer to tight end Michael Trigg.

UCA (0-2) found moderate success on its first drive running the ball with Hale and Trysten Smith, but a false start halted the drive.

UCA punter Chandler Caughron was dodging Ole Miss rushers all night on his punt attempts. On his first, he didn't get the chance as the ball flew over his head and it was picked up by Ladarius Tennison for an Ole Miss touchdown to make the score 14-0.

"Scoop and score. That's all I was thinking. That's all," said Tennyson, an Auburn transfer.

Caughron's next punt was blocked by Ole Miss and set up a 4-yard touchdown pass to Trigg to make it 21-0.

"We knew it was going to be an uphill battle coming in here tonight against a great program with what they've accomplished over the last few years of [Ole Miss Coach Lane] Kiffin, but we let it snowball on us early. That hurt us," UCA Coach Nathan Brown said, "It put us behind the eight-ball early."

Ole Miss entered Saturday's game in the thick of a quarterback battle between Altmyer and Jaxson Dart, both sophomores. Whether or not either separated themselves from one another is up to Kiffin, but both found plenty of success against UCA.

Altmyer was the first quarterback out for the Rebels and followed up his two touchdown passes to Trigg by running for another. He rushed for a touchdown near the end of the quarter to make it 28-0.

UCA managed to keep Altmyer and the Ole Miss offense quiet throughout the second quarter, holding it to a field goal to head into the halftiume down 31-0.

Altmyer completed 6 of 7 passes for 90 yards and 2 touchdowns before sustaining what was described by a spokesperson as an upper-body injury. He threw eight more passes following the injury, but seven fell incomplete and another was intercepted by UCA's Kemari Clark.

Dart entered near the end of the first half and played a little more than a quarter. He led the Rebels on three scoring drives in the third quarter to extend Ole Miss' lead to 52-0. He exited having completed 10 of 16 passes for 182 yards and 2 touchdowns.

It didn't matter who was behind center for Trigg. The 6-4, 240-pound sophomore caught 5 passes for 28 yards and 3 touchdowns.

There weren't many highlights for the Bears, but the rapport between Will McElvain and Jarrod Barnes was night and day's difference from the first half to the second.

On UCA's first possession, McElvain looked toward Barnes for his first two pass attempts, but there was miscommunication between the two and both passes found the turf before the hands of their intended target.

Barnes hauled in six of McElvain's 13 completed passed for 84 of his 126 yards. Nearly half of Barnes' yards came on a 41-yard completion early in the fourth quarter.

UCA concluded the drive with a 30-yard field goal by Hayden Ray.

Similar to last week's defeat to Missouri State, UCA wasn't able to maintain a consistent rushing attack. Last week Hale and Kylin James combined for 185 yards on the ground, and UCA was forced to lean on the passing attack. Against Ole Miss, the duo, along with Smith, managed 104 yards on 29 carries for less than 4 yards per carry.

"I thought we were able run the ball early on and move the chains on the first couple drives. We just couldn't sustain nothing," Brown said.

Brown said he knew the first two opponents on the Bears' schedule were going to be tough, and he hopes that the losses can be used as a launching pad toward success later in the season.

"I think we've got a chance to play with anybody we play with from here on out," Brown said. "This team hadn't had the opportunity to get the fruits of their labor rewarded yet, but I truly believe it's coming soon. I think we're a good football team." 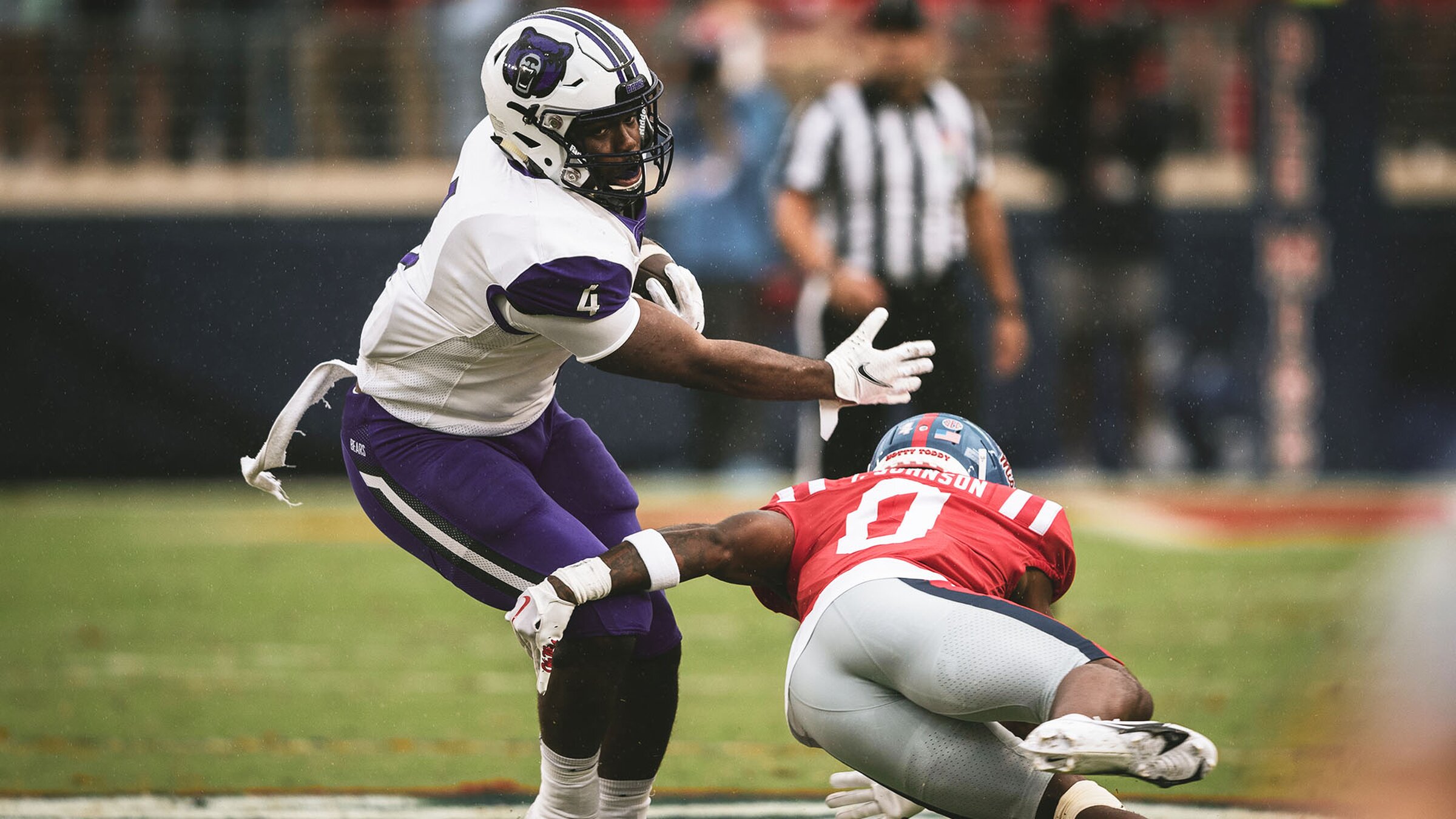 Central Arkansas running back Darius Hale eludes a tackle by Ole Miss safety Tysheem Johnson on Saturday during the Bears’ loss to the No. 22 Rebels in Oxford, Miss. (Photo courtesy UCA athletics)