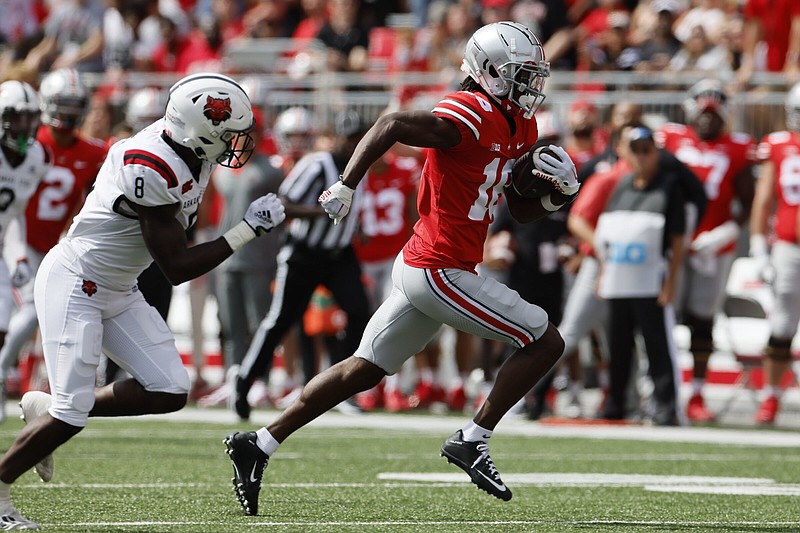 Ohio State receiver Marvin Harrison Jr. (right) runs past Arkansas State defensive back Eddie Smith on his way to a touchdown during the first half Saturday in Columbus, Ohio. Harrison had 7 receptions for 184 yards and 3 touchdowns as the Buckeyes won 45-12. More photos at arkansasonline.com/911asuosu/ (AP/Jay LaPrete)

COLUMBUS, Ohio -- About two hours before kickoff Saturday, Arkansas State filed down the ramp in the southwest corner of Ohio Stadium, circling around the Block O at midfield.

Smack dab in the middle of the century-old cauldron, not yet filled with 100,000-plus in scarlet and gray, there was legitimate hope.

It was not a wish and a prayer. Perhaps it was manufactured, but the Red Wolves genuinely believed they could play with the No. 3 team in the nation -- maybe even return to Jonesboro as winners.

"We can play with anybody," wide receiver Champ Flemings said. "But there are no moral victories in football."

For 25 minutes, ASU did its darndest to match Ohio State.

But when quarterback C.J. Stroud and the Buckeyes offense get their jets firing, there may not be a team in the nation that can keep them grounded.

Third-ranked Ohio State turned its eight-point lead into 29 with three touchdowns over nine minutes spanning the second and third quarters, putting the Buckeyes on autopilot as they cruised to a 45-12 win over the Red Wolves.

Stroud had his way with the ASU defense, racking up 351 yards while completing 16 of 24 passes with 4 touchdowns.

One of Ohio State's multiple Heisman Trophy contenders, Stroud got plenty of support from sophomore wideout Marvin Harrison Jr., who shined with two of the Buckeyes' top receivers sidelined. Harrison linked up with Stroud 7 times for 184 yards and 3 touchdowns -- a single-game program-best matched only by Harrison last season and Joey Galloway.

"When you play a team like Ohio State, every mistake you make is magnified, so you have to do a great job [of] not beating yourself," ASU Coach Butch Jones said. "They've got great football players, they've got really good schemes and they force you to execute.

"It's 17-9 with a little over five minutes to go in the first half and we give up a score. ... We go into halftime, but then I didn't like the way we started the second half. I thought we lacked some intensity."

Whatever juice the Red Wolves were missing at the start of the third quarter, Ohio State (2-0) more than made up for it.

After Harrison's second 42-yard touchdown made it 24-9 Buckeyes prior to the break, they needed just three plays to go 75 yards on the first series of the second half, capping it with TreVeyon Henderson's 23-yard rushing score.

Ohio State followed that up over the next 3:10 by forcing an ASU three-and-out -- one of six on the game -- and adding to the onslaught with a 51-yard touchdown reception by Emeka Egbuka.

What was once perhaps a surprising battle had devolved into a rout with the Buckeyes up 38-9.

"It's just all about finishing," Arkansas State quarterback James Blackman said. "We've got to keep growing, keep grinding it out and find a way to punch the ball in once we get that opportunity."

ASU (1-1) forced the Buckeyes to kick a short field at the start of the second quarter, keeping their deficit to 17-3 after Ohio State found the end zone on its first two drives.

Blackman and Flemings jump-started the Red Wolves' ensuing series with a 58-yard streaker down the sideline into Ohio State territory. But ASU stalled on its next three plays, leading to a Dominic Zvada 38-yard field goal.

The Red Wolves continued to find some offensive rhythm after the Buckeyes went three-and-out with a 14-play series over nearly seven minutes brought the Red Wolves into the Ohio State red zone for the first time before ending in another three points from Zvada.

The freshman placekicker, who went 4 of 4 with a long of 45 yards for his first career collegiate field goals, got plenty of work as ASU was unable to find the end zone after doing so eight times a week ago against Grambling State.

Five and a half hours after the Red Wolves first stepped onto the turf Saturday, ASU trudged back up the same southwest ramp.

"Disappointed but not discouraged" was the word from Jones, who praised his team's grit and mindset while acknowledging the Red Wolves need to be critical of themselves.

"Going forward, we've just got to trust in the coaches ... continue to fix some of the small mistakes and those self-inflicted wounds," Flemings said. "[We] can't let this game define us. Everybody has to understand that we've got 10 more games left to play.

"Continue to fight, continue to play hard, continue to hone in on the details and we'll be a good football team come the end of the year."

Ex-Buckeye not on trip

COLUMBUS, Ohio — A week after making his Arkansas State debut, running back Brian Snead did not travel with the Red Wolves for Saturday’s game at No. 3 Ohio State.

An ASU spokesman told the Arkansas Democrat-Gazette prior to kickoff that Snead was “unavailable.”

“We knew middle of the week,” Coach Butch Jones said of when he learned that the Red Wolves would be without Snead. “Brian wasn’t available, but we fully anticipate he’ll be ready to go for practice this week and … Memphis.”

Snead was dismissed from Ohio State on Nov. 27, 2018, after playing just two games for the Buckeyes as a freshman. He was found to be in violation of the school’s code of student conduct on charges non-consensual sexual intercourse and contact.

Per Ohio State policy, dismissed students may not be present on university property “without the express permission of Student Conduct or the Vice President for Student Life.” 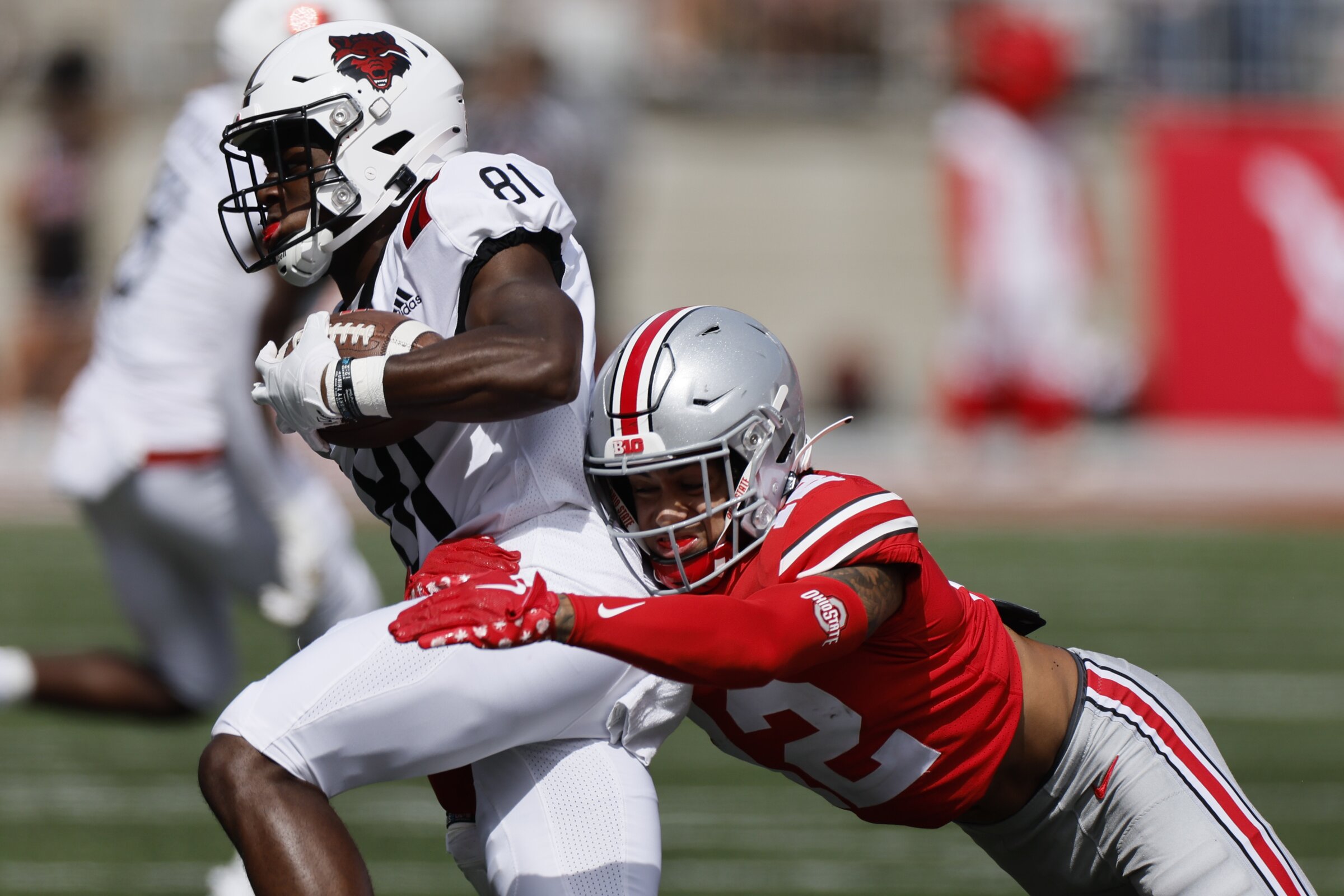 Arkansas State receiver Omari Walker (left) is tackled from behind by Ohio State defensive back Lathan Ransom on Saturday during the second half of the Red Wolves’ 45-12 loss to the No. 3 Buckeyes in Columbus, Ohio. More photos at arkansasonlne.com/911asuosu/. (AP/Jay LaPrete)