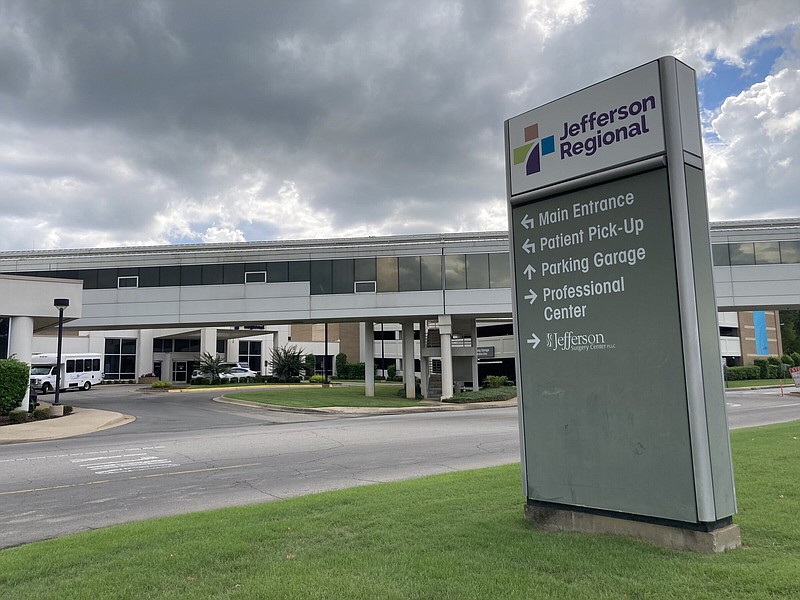 Reimbursements are not keeping up with the rising cost of health care, Jefferson Regional officials say. (Pine Bluff Commercial/Byron Tate)

The cost of providing medical care rose during the pandemic, and while some of those increases were covered by temporary reimbursements from the government, those funds have now largely disappeared, leaving hospitals with permanently higher costs and no realistic way to meet those demands.

That was the message from two Jefferson Regional executives who said their hospital's finances are healthy for now but that more needs to be done on the state and national level to increase the levels of reimbursement that hospitals receive from the government and from insurance companies.

"I've never seen anything like this in my career," said Brian Thomas, the hospital's president and CEO. "It's a unique time in the hospital business. We have a strong balance sheet, but unless things change, it can't be maintained for the long run."

Thomas and Jeremy Jeffery, the hospital's senior vice president and CFO, said the problem was twofold but that both boiled down to insufficient reimbursements for hospitals.

Historically, Medicaid reimbursement has not covered all of the costs associated with the care that is being provided, Thomas said, but now, the difference between the cost of care and the reimbursement for care has significantly grown.

"About two-thirds of our business is Medicare and Medicaid," Jeffery said. "And we really don't have a way of negotiating that reimbursement."

Then there is the private pay or insurance side of the coin, where the same situation exists. While costs have risen for hospitals, many insurance companies are continuing to reimburse at the same rates as before costs went up, Thomas said.

In a research paper published this year by the RAND Corp., a nonprofit, nonpartisan organization, figures show Arkansas with an insurance reimbursement rate of just under 150% of what Medicare pays and that the state is only behind Hawaii, with a rate of 147%.

Thomas said that means that a procedure done in Arkansas is reimbursed at a much lower rate than in even some of the states touching Arkansas. According to the report, Tennessee's insurance reimbursement rate, for instance, is 219% of what Medicare would pay, while Missouri's reimbursement rate is 255%.

"Our insurance reimbursement is at the bottom or close to it compared to other states," Thomas said. "That means the reimbursement would be significantly higher elsewhere for the same service done here."

Those inequities have always existed, Thomas said, but in today's economic environment, the differences have become stark, causing dozens of hospitals across the state to be put into serious enough financial straits that executives fear having to close them.

"It's much worse now than it was before the pandemic," Thomas said.

A recent article in the Arkansas Democrat-Gazette said the Arkansas Department of Human Services had asked the state to use $60 million in federal American Rescue Plan funds to help hospitals that were in danger of closing.

In the same story, Jodiane Tritt, executive vice president of the Arkansas Hospital Association, said many of the state's hospitals were "at a crisis point."

"It's the common theme when hospital administrators get together," Thomas said, referring to the economic headwinds being faced by hospitals. "Everybody at the table is feeling the pinch."

The problems have their roots in the covid-19 pandemic, Thomas said. The cost of providing care rose during that two-plus-year period, and early on, hospitals were getting assistance from various government programs. But now that the pandemic is waning, those higher costs have remained while the support has disappeared.

"Pharmaceuticals and supply costs have increased substantially," Thomas said. "And labor has skyrocketed. To run a hospital and take care of patients, you need nurses and technicians and therapists, but the costs have gotten significantly higher. Overall, our expenses are up nearly 20%. And they are not temporarily higher; they are permanent."

Some of those increases came as a direct result of the economic forces brought on by the pandemic.

Nurses and other care workers were at a premium, for instance, so pay rose. Personal protective equipment, which was in short supply, also saw a drastic increase in prices. And while all of those costs might flatten for a time, Thomas said he does not see them dropping, not with inflation surging at levels not seen in four decades.

For other businesses, when costs go up, prices rise, and people either pay those increased prices or curtail the use of that product. One need look no further than the gas pump. Not too many weeks ago, a gallon of regular gas approached $5. Groceries and other items have also seen surges in prices because of inflation. But raising prices does not work for hospitals.

"We don't have a ton of leverage," Jeffery said. "In many cases, we are told what we will be paid. There's really no way to increase our fees or our charges to directly increase our reimbursement."

Companies that sell products to hospitals can, like petroleum distributors, simply pass along the higher prices they face to their consumers, Thomas said.

"Vendors aren't losing any money," he said. "So who bears the brunt of those higher costs? Hospitals."

The reason that hospitals can't realistically raise rates, the two said, is because on the one side, Medicare and Medicaid dictate what hospitals are paid.

On the other side are large insurance companies that are not eager to raise the amount they reimburse to hospitals and other caregivers.

"Everybody is trying to save a dollar," Jeffery said, "and as far as the dollars flow, we are at the bottom."

Thomas said that, to fix the problem, state and federal elected officials need to address the inequities that now exist in what hospitals are having to spend to provide care and how much they are being paid for those services.

"We need more participation from all payers to address the shortfall we are having," Thomas said, adding that he was glad to see other hospital CEOs speaking out about the problem.

"We are not doing this to shame or guilt," he said. "But we need to get the attention of the legislative body and communicate to them that there are real challenges that are affecting all hospitals."

Thomas said Jefferson Regional does not intend to lose the positive momentum it is experiencing because of the reimbursement issues.

"Despite the financial pressures, our management team, board of directors, employees and medical staff are committed to providing exceptional care," he said. "We are experiencing record patient satisfaction scores. That's been improving for the past five to seven years. Morale is high, so we know our staff and physicians are all happy. We're committed to moving forward."

But the reimbursement element will have to be addressed at some point, and for Thomas, it should be earlier rather than later.

"This situation cannot continue forever," he said, "without a change in the way reimbursements are determined."