Izyum ‘liberated,’ its mayor proclaims by Compiled by Democrat-Gazette staff from wire reports | September 11, 2022 at 4:32 a.m. 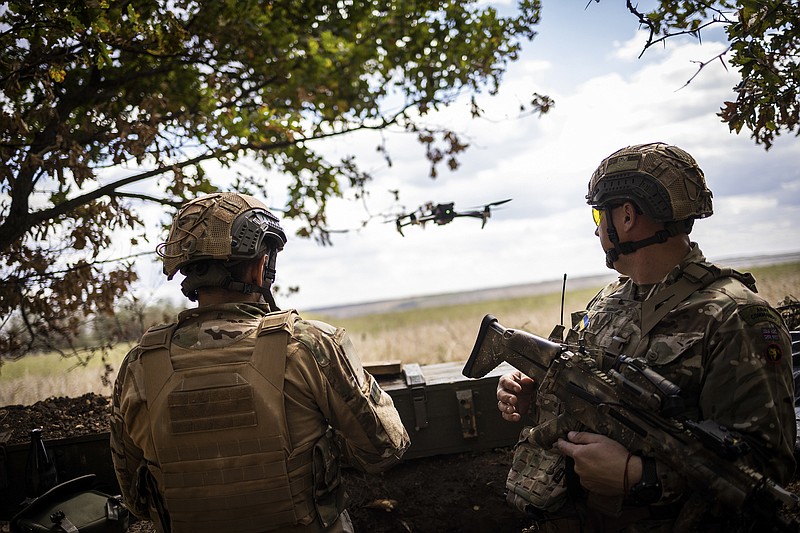 KYIV, Ukraine -- A lightning Ukrainian offensive in the country's northeast has reshaped what had become a grinding war of attrition. In a matter of days, Russian front lines have buckled, Moscow's troops have fled and one village after another has come once more beneath Ukraine's yellow and blue banner.

Ukrainian officials announced Saturday that their troops had taken the eastern city of Izyum, a strategically important railway hub that Russian forces seized in the spring after a bloody, weekslong battle.

Russian Defense Ministry spokesman Igor Konashenkov said troops would be regrouped from the Balakliya and Izyum areas to the eastern Donetsk region.

Konashenkov said the Russian move was being made "in order to achieve the stated goals of the special military operation to liberate Donbas," an eastern area home to two separatist regions that Russia has declared sovereign.

The claim of a withdrawal to concentrate on Donetsk is similar to the justification Russia gave for pulling back its forces from the Kyiv region earlier this year when they failed to take the capital.

While the 12,000 remaining residents of a prewar population of 40,000 celebrated Izyum's liberation from Russian control, their joy was tempered by the destruction wrought over the past six months.

"There's no single residential building that wasn't damaged," Marchenko said. "Heating is the biggest problem. I doubt whether we would be able to restore the heating system before winter."

Ukraine's capture of Izyum could mark a turning point in the war, dwarfed only by Russia's humiliating defeat around Kyiv in the spring.

"The Russian army in these days is demonstrating the best that it can do -- showing its back," Ukrainian President Volodymyr Zelenskyy said in a video released Saturday by his office. "And, of course, it's a good decision for them to run."

The successful Ukrainian offensive, which began this past week near Ukraine's second-largest city, Kharkiv, serves as a testament to the endurance of Ukrainian troops and, once more, the shortcomings of the Russian war machine.

The success of the Ukrainian offensive in the north comes at critical juncture. Besides lifting the country's morale and short-circuiting Russian plans to annex occupied territory, it is arriving ahead of winter, when front lines are expected to freeze and a global energy crisis could strain the West's support for Ukraine.

"The path to the return of our entire territory is all there, every day it becomes clearer. We see the contours of restoring the territorial integrity of our state," Zelenskyy said Saturday. He warned that the next 90 days of fighting, as the seasons change and temperatures drop, would be crucial.

But now, before the first snowfall, Ukrainian troops have dealt a serious blow to their Russian foes, ensuring that, come spring and barring any setbacks, the war's outcome could turn decidedly in Ukraine's favor, analysts say.

The Russian military's collapse that led to the loss of Izyum can largely be attributed to one simple fact: Russian forces left their flanks undefended, perhaps because of growing troop shortages, exhausted conscripts and low morale.

Since the beginning of the summer, Russian troops have been deployed to the Donbas, the mineral-rich region of mining towns and rolling fields just east of Izyum. The seizure of Ukraine's eastern steppe is one of Moscow's primary war aims, and in June and July its forces managed to capture the two industrial cities of Sieverodonetsk and Lysychansk.

But in recent weeks, tens of thousands of Russian troops were also shifted to the south, to buffer against a well-publicized Ukrainian offensive that began last month in the Kherson region.

Though the southern offensive might appear to have been a feint, preparing the battlefield in the northeast for Kyiv's stunning breakthrough, both attacks were well planned and backed by a sizable number of ground troops.

"We need to wait to see how far they can go, but the offensive in the northeast and Kherson tells us Ukraine has a manpower advantage and can use it effectively," Lee said. Casualties in the south, troops deployed there said recently, have been significant, though Ukrainian forces have retaken several villages.

Manpower and ammunition have been two defining elements of the 6-month-old war in Ukraine. In nearly every category, Russia has had more of each, saturating Ukrainian positions with bone-shattering artillery barrages and steadily advancing with lines of troops despite often horrific casualties.

Ukrainian Defense Minister Oleksii Reznikov told the television channel Ukraina that the Russians had no food or fuel for their troops in the area as Kyiv had cut off their supply lines.

"It will be like an avalanche," he said, predicting a Russian fallback. "One line of defense will shake, and it will fall."

Western intelligence agencies estimate that both sides have losses in the tens of thousands, making Ukraine's recent gains even more remarkable, while highlighting the fatigue in the Russian ranks, which have suffered 80,000 wounded and killed since the war began, according to the agencies.

"There is still a lot that we don't know about the offensive, but it is clear this was well planned and executed by Ukrainian forces," Lee said. "It looks like a very effective combined arms operation with tanks, mechanized infantry, Special Operations forces, air defenses, artillery and other systems."

But with the battlefield changing by the hour it still remains unclear how the coming days will unfold. Pro-Russian bloggers have posted numerous images of Russia's 3rd Army Corps headed toward Izyum, though the shift in forces appears to have come too late.

The Russian military still has large numbers of troops and, notably, air power. It is likely to try to counterattack or at least harass Ukrainian forces as they advance.

After Russian forces seized Izyum in the war's early months, it gave them a decided advantage in the eastern Ukrainian regions of Luhansk and Donetsk -- known collectively as the Donbas. That left strategically important Ukrainian-held cities in the region trapped in a slowly closing pocket as the Russian troops advanced.

Russia's control of Izyum ensured that Ukrainian forces would have to be deployed there to keep Russian forces from advancing farther west. This in turn meant that important resources and troops could not be committed elsewhere on the front line.

The Russian advances in the Donbas stalled over the summer, as its exhausted units paused to rest and tried with uncertain success to replenish their ranks and stores of weapons, armor and ammunition.

Those problems will be further compounded by the loss of Izyum. An important supply hub, the city was a military way station for Russian forces in parts of the Donbas. With those lines severed, as seems increasingly likely, Russian forces, especially their artillery batteries, will come under increasing strain.

With Izyum now under Ukrainian control, it has left Kyiv's forces with more geography from which to launch further offensives, and relieves pressure on cities that have been subjected to relentless Russian shelling, such as Kramatorsk and Sloviansk in the Donbas.

Foreign Ministry spokesman Oleh Nikolenko also suggested troops had retaken Kupiansk, a town along the main supply route to Izyum, long a focus on the Russian front line and the site of heavy artillery and other fighting. Nikolenko tweeted a photo showing soldiers in front of what he said was a government building in Kupiansk, 45 miles north of Izyum.

The Ukrainian Security Service posted a message hours later saying troops were in Kupiansk, further suggesting it had been seized. The military did not immediately confirm entering the town, a railway hub that Russia seized in February.

Britain's Defense Ministry noted Saturday that it believed Ukrainian troops had advanced as much as 30 miles south of Kharkiv, and described Russian forces around Izyum as "increasingly isolated."

"Russian forces were likely taken by surprise. The sector was only lightly held and Ukrainian units have captured or surrounded several towns," the British military said, adding that the loss of Kupiansk would greatly affect Russian supply lines.

The Institute for the Study of War, a Washington-based think tank, likewise referenced sweeping Ukrainian gains, estimating that Kyiv has seized around 965 square miles in its eastern breakthrough.

The Ukrainians will have to process hundreds if not thousands of Russian prisoners captured during their sweep across the northeast, while also distributing highly prized Russian military equipment.

Unverified videos posted to social media in recent days have shown hastily abandoned armored personnel carriers and tanks, types of equipment that the Ukrainian military is severely lacking as their Soviet-era armament has been ground down from months of fighting.

But Western analysts have also attributed Kyiv's recent victories to superior tactics, better planning, higher morale and a decentralized command structure, all of which seem to have combined to enable its military to seize the initiative and, for now, to succeed against a numerically superior force.

Baerbock said Germany will assist Ukraine in finding and removing mines and other unexploded ordnance left by Russian troops in areas where they have been pushed back.

Information for this article was contributed by Thomas Gibbons-Neff and Marc Santora of The New York Times and by Karl Ritter, Joanna Kozlowska and Frank Jordans of The Associated Press.