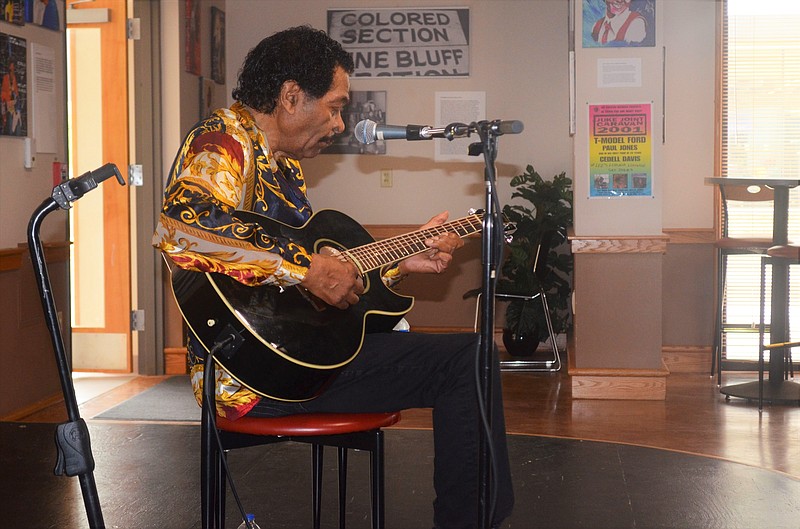 Bobby Rush regaled listeners with original compositions and excerpts from his life and times as an iconic Blues figure. (Special to The Commercial/Richard Ledbetter)

Saturday saw the University of Arkansas at Pine Bluff's downtown Business Support Incubator alive with activity during the Discover Our Delta Celebration.

At just past noon, the "king of the chitlin circuit," Bobby Rush, took the stage to enlighten and entertain fans with tales from his legendary blues career.

The free Discover Our Delta Celebration was sponsored by the Pine Bluff Advertising and Promotion Commission and various events were held downtown Friday and Saturday.

"We're here to spread the gospel of the blues and make new converts," Cunningham said. "We don't believe our city has gotten her due and we want to educate the public that Pine Bluff has always been a blues epicenter. This is one way for us to shout to the world how we put the elements in this stew and helped create the genre!"

"Bobby Rush is walking, talking history and a two-time Grammy winner who you've seen in movies like "Black Snake Moan" and "Dolomite is my Name." Please welcome Pine Bluff and Jefferson County's very own, Bobby Rush!"

Rush was humbled by the accolades.

Speaking directly to Cunningham, Rush said, "You are my friend who has helped make these kinds of events happen. I'm back in town to do for you for what you have done for me over the years. This is just the beginning of what we are going to do."

Addressing his audience Rush said, "You should treasure what you have here as long as you can."

Drawing from the testimony of his autobiography, "I Ain't Studdin' You," Rush regaled listeners with his life and times traveling the juke joints of the South and performing in northern night clubs. Between stories and life lessons, Rush peppered the appearance with songs performed with his ever-vibrant vocals, harmonica playing and acoustic guitar work.

Waxing philosophic, Rush said, "I've been here a long time. I want you to know that I know there is nothing new under the sun. In my life I can see the more things change the more they remain the same."

Addressing his beginnings, Rush said, "I've been on stage 70-some-odd years and from the start I always wanted to be a bluesman. I went to Chicago in 1951 but before that I'd go in Jittie Bugs juke joint on Third Avenue when I was just 15."

He explained how he pulled it off by using a burnt matchstick to paint on a fake mustache and pull his hat brim low over his face.

"I thank Pine Bluff for giving me the first stage I ever appeared on," Rush said.

He continued in that vein.

"There was another little club down on 27th and Main where I played. I was probably the worst player on stage but I owned all the amps and instruments so I was the boss," he said.

Recalling his early days up north, Rush told about the Chicago suburb of Blue Island, Ill., where he played behind a curtain because folks wanted to hear the band's music but didn't want to see their faces.

"My brother is in the house tonight," Rush said, introducing local businessman Larry Ellis. "There were 10 kids in our family and Larry is the baby. He was there in the early days and went through so many hardships and struggles with me. We slept in the car on the road together many nights. I say this because you won't find pictures of us with some of the bluesmen I've worked with because we didn't take so many pictures back then. But Larry was there and he can witness when we were with Nat King Cole, Howlin' Wolf, B.B. King and John Lee Hooker. I introduced Howlin' Wolf to his wife Lilly."

Rush turned to the history of his genre.

"Blues is the root of all popular American music and the mother of all music," he said.

Flashing his trademark grin, he added, "If you don't like the blues you probably don't like your momma."

He introduced another member of his entourage.

"Bruce has been playing drums with me for 40 years. 2022 marks 70 years of my recording the blues. I'm still learning and still enjoy it. I remember when I had one record. Now I've got 397. I don't remember the words to all of them but I know at least 300," he said.

"Some of the songs I still do my band don't even remember," he said looking to his drummer.

Before launching into a harmonica performance, Rush shared something he said he'd never told an audience before. Raising his harmonica, he showed how he has always played the instrument held upside down from the traditional style, then demonstrated how this alternative helps him achieve a unique quality of sound.

In honor of his preacher father, Emmett Ellis Sr., Rush sang, "Swing Low Sweet Chariot" that transitioned into the blues classic, "How Long."

In closing his hourlong set, Rush said, "I have tears in my eyes of joy to think how blessed I am to sit and talk to you. God blessed me to live this long and still have you coming to see me."

During a brief Q&A after his presentation, Rush told how the production of the musical play based on his career titled "Slippin' Through the Cracks," is "going so good."

Three different actors portray Rush at different stages of his life. Once the production is fully ironed out, it is expected to make its first appearances on stage in Jackson, Miss.; Memphis, New Orleans and Chicago.

Asked how he fared in the recent flooding of the Pearl River in his current home of Jackson, he said it had flooded the basement of his home.

Cunningham addressed the crowd in closing.

"With Bobby you get it all, music, history and philosophy," he said.

He reminded people of the world premiere of the "Tail Dragger" documentary that was being shown at 2 p.m. Saturday at the Arts and Science Center for Southeast Arkansas.

Cunningham shared how the film features the life of James "Tail Dragger" Jones," the Altheimer-raised, Grammy-nominated musician who has 60 years of national and international performances.

"He (Jones) is a product of the culture of this area. He would sneak in local clubs like the Jack Rabbit at an early age and always aspired to be a bluesman. He is one of the last remaining from that era who loves his craft, loves his family and loves the Blues. The documentary will be entering film festivals beginning January 2023 but you can see it first here today.

Jones couldn't be here for the premiere because he is performing in Austin, Texas, tonight but will make a Zoom appearance to introduce the film," Cunningham said.

In the viewing, Jones explained how he got his nickname Tail Dragger from Howlin' Wolf. The moniker derived from his always being the last one to show up for practice or gigs. His habitual tardiness was the result of holding down a regular day job as a mechanic.

Tail Dragger said of his career, "Money's not everything as long as you're happy. If you're happy, you're blessed. And I'm happy." 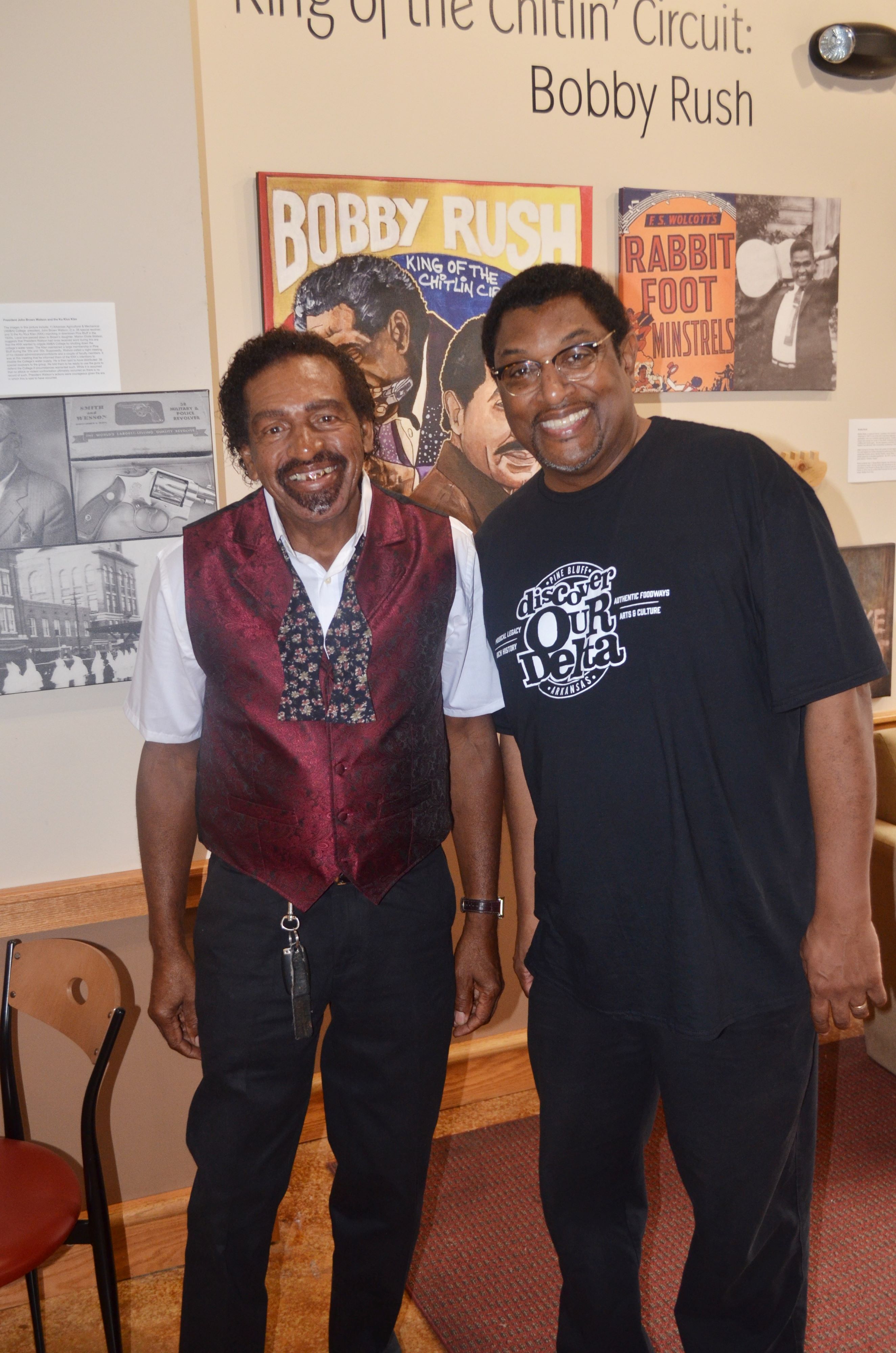 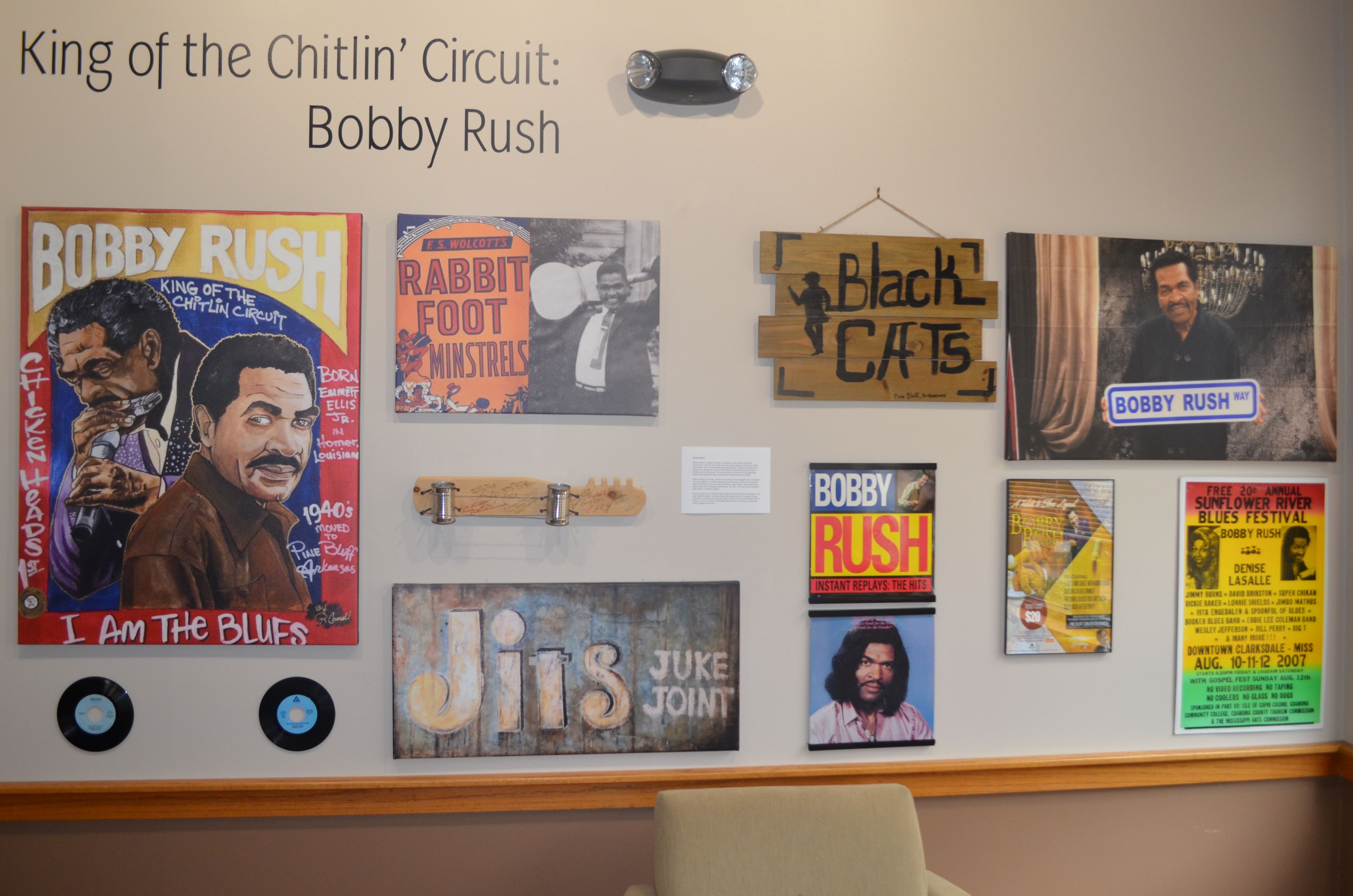 The UAPB Business Incubator bistro features among its many Blues exhibits a prominent display of Bobby Rush art and memorabilia. (Special to The Commercial/Richard Ledbetter)