‘Morning-after pills’ not always an option after rape, medical professionals say by AMY FORLITI The Associated Press | September 12, 2022 at 3:42 a.m. 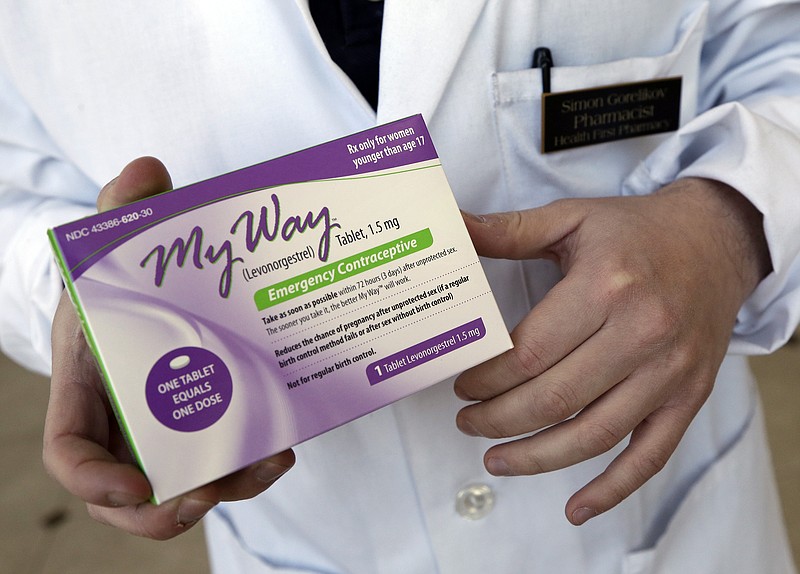 FILE - Pharmacist Simon Gorelikov holds a generic emergency contraceptive at the Health First Pharmacy in Boston on May 2, 2013. Some leaders in states that ban abortions at all points of pregnancy say exceptions for rape or incest victims aren't needed because emergency contraceptives can be used instead. But medical professionals and advocates for rape survivors say that while emergency contraception is a helpful tool, it's not always foolproof, and getting access to these emergency measures in the short timeframe in which they would be effective may not be realistic for someone who has just been assaulted. (AP Photo/Elise Amendola, File)

MINNEAPOLIS -- Some leaders in states with strict abortion bans say exceptions for rape or incest victims aren't needed because emergency contraceptives can be used instead. But medical professionals and advocates for rape survivors say that while emergency contraception is a helpful tool, it's not always foolproof, and getting access to these emergency measures in the short time frame in which they would be effective may not be realistic for someone who has just been assaulted.

Emergency contraceptives are used to prevent pregnancy after unprotected sex or if a method of birth control fails.

Two types of medications, sometimes referred to as "morning-after pills," are available: levonorgestrel, known by the popular brand name Plan B; and ulipristal acetate, known under the brand ella. They should be taken as soon as possible after unprotected sex.

The pills prevent ovulation, which is when an egg is released from an ovary, said Dr. Jonah Fleisher, director of the Center for Reproductive Health at the University of Illinois in Chicago. If an egg is not released, it cannot be fertilized.

They are not the same as abortion pills. Emergency contraceptives prevent a pregnancy. The abortion pill, mifepristone, ends a pregnancy after a fertilized egg has implanted in the lining of a woman's uterus. It's commonly administered with the drug misoprostol and can be taken up to 11 weeks after the first day of a woman's last period.

Emergency contraceptives don't work 100% of the time. The pills' effectiveness improves the sooner they are taken after unprotected sex, doctors said. The drugs won't prevent pregnancies if they are taken before sex, Fleisher said.

The Food and Drug Administration has approved Plan B for use up to 72 hours, or three days, after unprotected sex. Ella is approved for up to 120 hours, or five days.

Timing is important because sperm can live inside a woman's body for up to five days, so a woman can still get pregnant if ovulation occurs after intercourse, said Dr. Dana Stone, an obstetrician and gynecologist in Oklahoma City. If a woman has ovulated before intercourse, the pills are unlikely to help.

"So that's where the failure comes in. It's based on the timing," Stone said.

A woman's weight also may play a role, though there is conflicting information on that. Guidance from the American College of Obstetrics and Gynecology says levonorgestrel may be less effective in women with a body mass index that's over 25. The organization says some research suggests ulipristal acetate also has lower effectiveness among women with a BMI that's 30 or higher.

However, the FDA found conflicting data and reached no conclusion in a 2016 review of the effectiveness of levonorgestrel in women who weigh more than 165 pounds or have a BMI above 25. The agency said additional research should be a priority.

Another form of emergency contraception, a copper intrauterine device, is seen as the most effective method, if inserted into a woman's uterus within five days of unprotected sex. Its effectiveness is not dependent on weight, Fleisher said.

A doctor or nurse must insert a copper IUD, which can remain in place for many years as a regular form of birth control.

Officials in some states, such as Texas Gov. Greg Abbott and South Carolina state Rep. Doug Gilliam, point to emergency contraceptives as a reason abortion bans don't need exceptions for rape or incest.

During an Aug. 31 House debate, Gilliam said, in a hypothetical case of a 12-year-old raped by her father, the child would have "choices" and wouldn't be "forced" to carry a pregnancy. Among them, he said, she could go to the hospital and get an emergency contraceptive, or go to the store and get one without a prescription.

Pressed by a fellow lawmaker on who would take the girl to the store to get the pill, he initially replied "The ambulance," then corrected himself and said, "The hospital when she's there."

In a follow-up interview with The Associated Press, the Republican lawmaker said he did not mean to suggest that an ambulance would take a girl to a store, but that if she were to go to the hospital, she would likely be offered emergency contraception.

"I don't want anybody to think that I told you a 12-year-old that just been raped ... is going to call an ambulance to go to a store," he said. "I just let them know the options were out there, and one of them was emergency medical contraceptives."

Most rape victims don't report the crime to law enforcement, according to Jude Foster, advocacy medical forensic and prevention programs director for the Minnesota Coalition Against Sexual Assault. Many also may not go in for immediate medical care. Not everyone knows that emergency contraceptives are an option and part of a routine rape exam, or that such an exam is free.

"Why is sexual assault used as a political football when you are talking about access to reproductive care?" Foster said. "Please don't. It just really frustrates me."

Stone said the belief that a woman can just take Plan B if she is raped is misguided.

"We need all kinds of options for women because nothing is a one size fits all," Stone said. "People have transportation problems, they have financial problems. There are always barriers to some percentage of women that will keep them from accessing this in the short time frame that they have."

Several states have explicitly allowed for emergency contraception in their abortion laws.

Arkansas, Kentucky and Oklahoma all have laws that ban abortion at all stages of pregnancy, and make no exceptions for cases of rape or incest. Arkansas' and Kentucky's laws explicitly say they don't prohibit contraceptive measures if they are used before a pregnancy can be determined. Oklahoma's abortion ban also does not apply to emergency contraception.

Abortion bans aside, the National Conference of State Legislatures says 21 states and the District of Columbia have statutes related to accessing emergency contraception, and 16 of them and the District of Columbia require hospitals or health care facilities to provide information about or administer emergency contraception to women who have been sexually assaulted.

Fleisher said emergency contraception does not replace the need for abortion care, and these issues should be between a doctor and patient.

"The people writing the laws don't understand the choices that real people are making," he said.