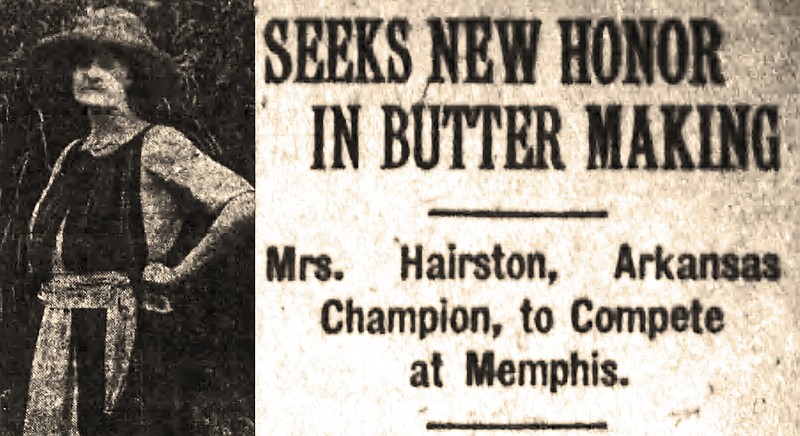 The Sept. 10, 1922, Arkansas Gazette reported Mrs. Wylie Hairston would represent the state in a three-state butter-making competition at the Tri-State Fair in Memphis. (Democrat-Gazette archives)

It was September 1922, and Mrs. Wylie Hairston, state champion butter maker, was headed to Memphis to represent Arkansas at the Tri-State Fair.

The Sept. 5, 1922, Arkansas Democrat conveyed the news that Hairston, who lived in the South Oak Grove community near Warren, would take on the butter-making champions of other states Sept. 29. She would face off against Mrs. Fleming Hodges of Dyersburg, Tenn., and Mrs. J.M. Walker of Oxford, Miss.

"We confidently expect her to win," Miss Bonslagel said.

Hairston owed her opportunity to E.J. Bodman, vice president of the Union and Mercantile Trust Co. and chairman of the Arkansas Bankers' Association. Bonslagel revealed that Bodman had given her $100 to promote her work as a state home demonstration agent any way she saw fit, and so she had sent three promising butter makers to a weeklong butter-making short course at the University of Arkansas College of Agriculture in Fayetteville. All three had triumphed in home district butter-making matches. Along with Hairston, they were Mrs. L.C. Albright of Harrisburg and Mrs. Ed Moody of Fort Smith.

The Democrat reported that Hairston's butter-making ability first came to attention when she won the Bradley County championship. Next she was first in the southeastern Arkansas district contest, and finally she was crowned the state's champion in a contest conducted by the College of Agriculture (see below).

"This contest was statewide and has resulted in increased interest on the part of farm women in better methods of making butter in the home," Bonslagel explained.

The Democrat explained that the women would compete in Memphis by actually making butter there, "just as they would at home."

"The ingredients and the implements needed will be furnished by the fair, unless the women prefer to use their own. All their expenses to Memphis will be paid by the fair association," the paper reported.

And so, although banker Bodman backed Bonslagel's bid to promote better butter through better butter-making methods, it was the Memphis fair that paid to put an Arkansas champion's butter up against other states' better-butter makers' butters at the regional level.

RISING TO THE TOP

In Arkansas, the College of Agriculture's statewide contest was developed in 1916 by home demonstration agents in the Farmers' Cooperative Demonstration Work organization. Founded in 1914, this predecessor of today's Division of Agriculture's Cooperative Extension Service taught new information about best practices in farming, homemaking and other essential areas of rural life (see arkansasonline.com/912coop).

Its first better-butter-making contest was conducted by the University of Arkansas, Fayetteville and it lasted a year.

All Arkansas farm women who made their own butter were eligible. The home demonstrators urged mothers who couldn't enter the contest to have their daughters do the work.

The prizes included a registered Jersey bull calf, a cream separator, a Babcock tester and milk scale (whatever they were) and a free six-month subscription to a weekly dairy paper from Hoard's Dairyman of Fort Atkinson, Wis. Also, all the contestants who averaged a 90 score or higher for 12 months received a diploma of merit.

Those of us who never lived on a farm but have summoned butter from half-and-half in Mason jars in our kitchens might imagine that the butter contest was a literal arms race, with strong ladies pumping churns as fast as they could. That would be funny. But making better butter began with how one cared for the cow.

Contestants received instructions and advice regularly, and the butter was judged at regular intervals. Contestants mailed in a firm sample of their butter that had been pressed ("printed") in a brick-shaped mold, wrapped in parchment paper and put in a carton that was then placed inside a snug-fitting corrugated pasteboard or wooden box.

Here, from the June 3, 1916, Gazette are considerations for better home butter making. They come from R.H. Mason, assistant dairy husbandman of the university, and the U.S. Department of Agriculture, whose expert F.H. Hurzer had just finished judging 46 entries in the first month of 1916's 12-month contest.

The entries scored from fair to good. Two contestants hit a score of 93. One submitted her butter 20 miles by parcel post and the other 315 miles. "This proves that butter may be sent by parcel post during warm weather," someone said, possibly Mason, although the Gazette report isn't clear.

"The most general criticism was that the butter was feverish or oily," Mason said. "The feverish flavor is noticeable particularly in the spring when cows are turned out on pasture. In most cases it is due to the sudden change from dry feed to luxuriant pasture. It is possible that this feverish or greasy odor is due partly to the feverish condition of the cow, caused by the sudden change of feed. Any feverish condition of the cow will manifest itself in the milk and its products.

"Mottles were noticeable to some extent in several samples. These may be revived by working, but frequently conditions are such as to require overworking to remove them. The following are conditions that cause mottling: Coarse, uneven grain salt, carelessly adding the salt to the butter, working butter while it is too cold, using too cold or too warm water for washing, too much buttermilk in the butter and not enough moisture in the butter while it is being worked."

Add in the fact that air conditioning was decades away. Better butter was not easily made.

Bitterly I admit that I cannot find that Tri-State Fair contest's results in the archives of the Gazette or Democrat, which might hint that victory went to the butter-making champions of Mississippi or Tennessee — but not necessarily. Newspapers publish more than one edition per day, and so a Hairston triumph might have been reported in an early edition but superseded by news about victorious Arkansas cows in a later edition. The fair was a livestock show, too, not merely a battleground for cooks.

Butter was a high-interest item at the fair because of a contemporary movement among small farmers to create cooperative creameries, where everyone's cream could be processed and shipped from one sanitized facility.

The Sept. 24, 1922, Nashville Tennessean reported that the Tennessee Creameries Association exhibit at the Tri-State Fair included a "golden cow" molded from 500 pounds of butter churned at the cooperative creamery at Murfreesboro, Tenn. The story included a photo of the big, grinning cow.

The same day's Gazette reported that seven farmers near Magnet Cove had created a cooperative shipping station in Hot Spring County. The station shipped the butter fat of 31 cows twice a week to the Terry Dairy in Little Rock.

C.E. Lawrence of Magnet Cove weighed the butter fat and paid each farmer 30 cents a pound after it was delivered to Terry Dairy. Undiminished by travel cost, the farmers' butter money paid for the upkeep of their cows, allowing them to save up to buy better cows from which they might get more butter fat per gallon; and they could feed their skimmed milk to the hogs and chickens.

Print Headline: This butter maker made her butter better in 1922