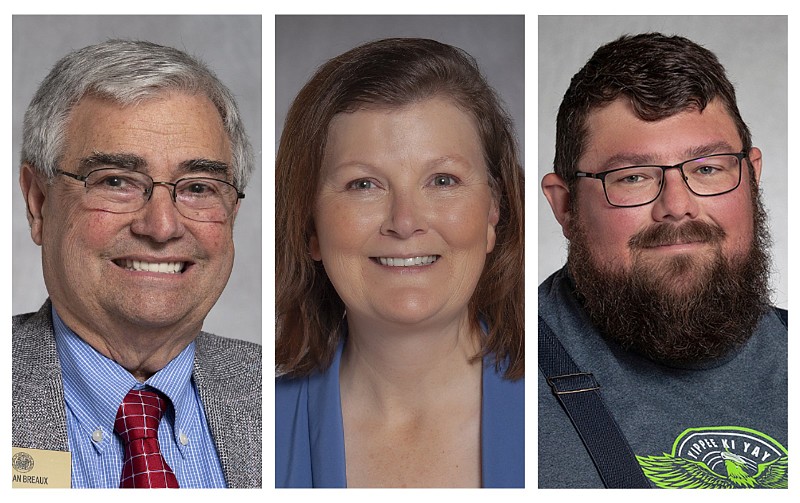 Voters in northern Arkansas' state House District 6 get three candidates to choose from in the Nov. 8 general election.

Incumbent Harlan Breaux, R-Holiday Island, seeks his third term. Democratic challenger Markeeta Tucker and Libertarian Party nominee Dakota Logan are running. There are no runoffs in legislative races in a general election in Arkansas. Whoever ends the general election's count with the most votes will win.

State representatives serve two-year terms and receive a base salary of $44,357. The state House has 100 members. Early voting begins Oct. 24.

"My record speaks for itself," Breaux said. "I've voted for pro-life bills and to lower taxes. I want to do more of that as well." This is Breaux's second election contest this year. He defeated Republican primary challenger Brian Ayers of Oak Grove in May.

Voters in the district are concerned with education, Breaux said. "They don't want the CRT thing," he said, referring to critical race theory, which holds that race was an important factor in forming government institutions. "They want more say in their kids' education," he said of parents. They also want more pay for teachers, he said.

Inflation is another major concern for district residents, Breaux said. That is mainly an issue for the federal government but the state can provide some relief by cutting the tax burden, he said. Having more money in their pockets will help Arkansans cope with the problem, he said.

"I really do have a servant's attitude," Breaux said. "I really enjoy helping people. It makes my day and gets me going."

"I'm thankful for the people who've believed in me in the past. I need their help and prayers. We need leadership in this country. We need it at a higher level but we need to start where we're at."

Logan is running because the two major parties are at such loggerheads that the constituents they are supposed to serve are ignored, he said.

"I am a working-class member of this district who's tired of everything going through the divisiveness of the major two parties," he said.

"We don't feel like we're represented by either party," Logan said. He joined the Libertarians "because I was looking for a political home."

"Ask the people around here if either party is looking out for their interests and you'll get an expletive in front of 'no'," Logan said.

"We're an interesting mix," Logan said of District 6. "We have the tourist businesses, retirees at Holiday Island, manufacturing at Berryville and Green Forest. We're a very interesting mix of people who are not happy with the amount of taxes we're paying and the prices of everything else."

"We need affordable housing, roads and infrastructure in both counties," Logan said. "I saw property sold for $4,500 an acre in a tract get divided into lots and now selling for $25,000. Now that was by the Kings River, but by the time you pay to get a well dug people from here can no longer afford to live here."

Tucker is a self-described "Army brat" who is a fifth-generation Arkansan. As a child she followed her father's service career, but her real home has always been Omaha in Boone County, she said.

Her biggest concern if elected, she said, would be "the decline of farmers in our areas. They can't make any money, and that hurts consumers too. I'd work with the rural caucus to find solutions." Her grandparents owned a small beef and dairy farm, so she knows the struggles farmers in the area are going through, she said.

"We used to see farm after farm here and we're losing them," she said.

The district's constituents like to keep to themselves, she said, but are always willing to lend a helping hand to those who need one. "We don't want the government in our stuff, but there are a lot of veterans here," she said. "There's kindness and compassion. If you have a flat tire here, someone will help you."

The hospitality industry is also vital to the district, Tucker said. She spent 25 years working in that sector and is quite familiar with the industry's needs and issues, she said. She has worked in resorts, as a wedding coordinator and in a casino, she said. Medical care is also a major concern, she said. She moved back to Arkansas permanently to aid family members, she said.

Occupation: partner in the Kratom Store in Hollister, Mo.