A century of service: Mena’s Skyline Cafe celebrates 100 years of feeding the masses 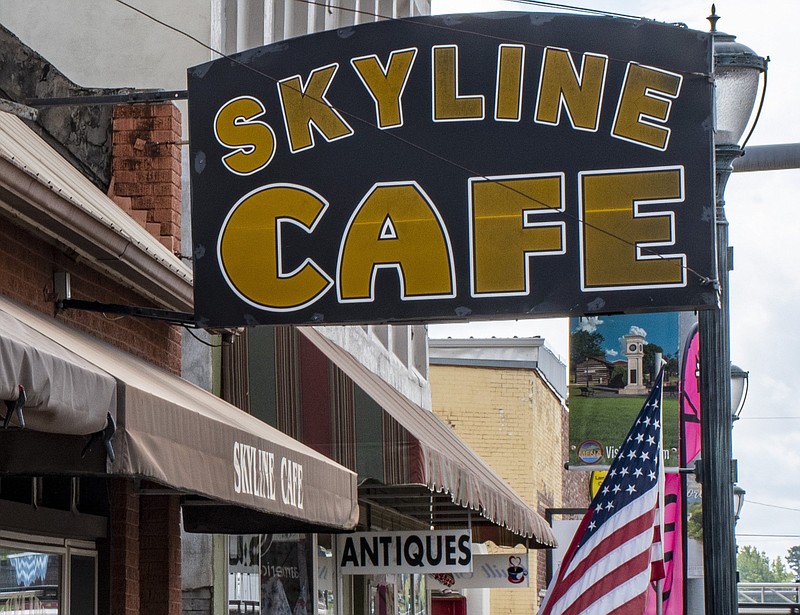 The Skyline Cafe in Mena has been open since 1922. (Arkansas Democrat-Gazette/Cary Jenkins)

MENA — On the Friday morning before Labor Day, hungry diners wait for a table at the Skyline Cafe as staff members take orders and hustle breakfast plates to those patrons already seated. The smell of bacon, eggs, hash browns, coffee and pancakes mingles with dozens of conversations taking place at the busy, homey restaurant.

This is nothing new for the Skyline, which seats 78. The restaurant has been feeding people at its spot at 618 Mena St., since 1922, surviving the Great Depression, the wrath of a tornado and the covid-19 pandemic. It has also been a hub for regulars to meet, have some coffee or a meal and catch up on matters large and small.

And since the exact opening day has been lost to the ages, Labor Day weekend seemed like the perfect time to celebrate with special $4 plates of smothered pork chops, mashed potatoes, Waldorf Salad and dessert; 75-cent pancake stacks, contests, giveaways, T-shirts and more.

Jayne Richmond, 71, grew up in Mena and is a longtime Skyline patron.

"In junior high and high school, me and my friends would walk down and have french fries and a Coke for lunch," she says. "It's always been popular. It's had good people that own it and keep it going, and the food is really good." 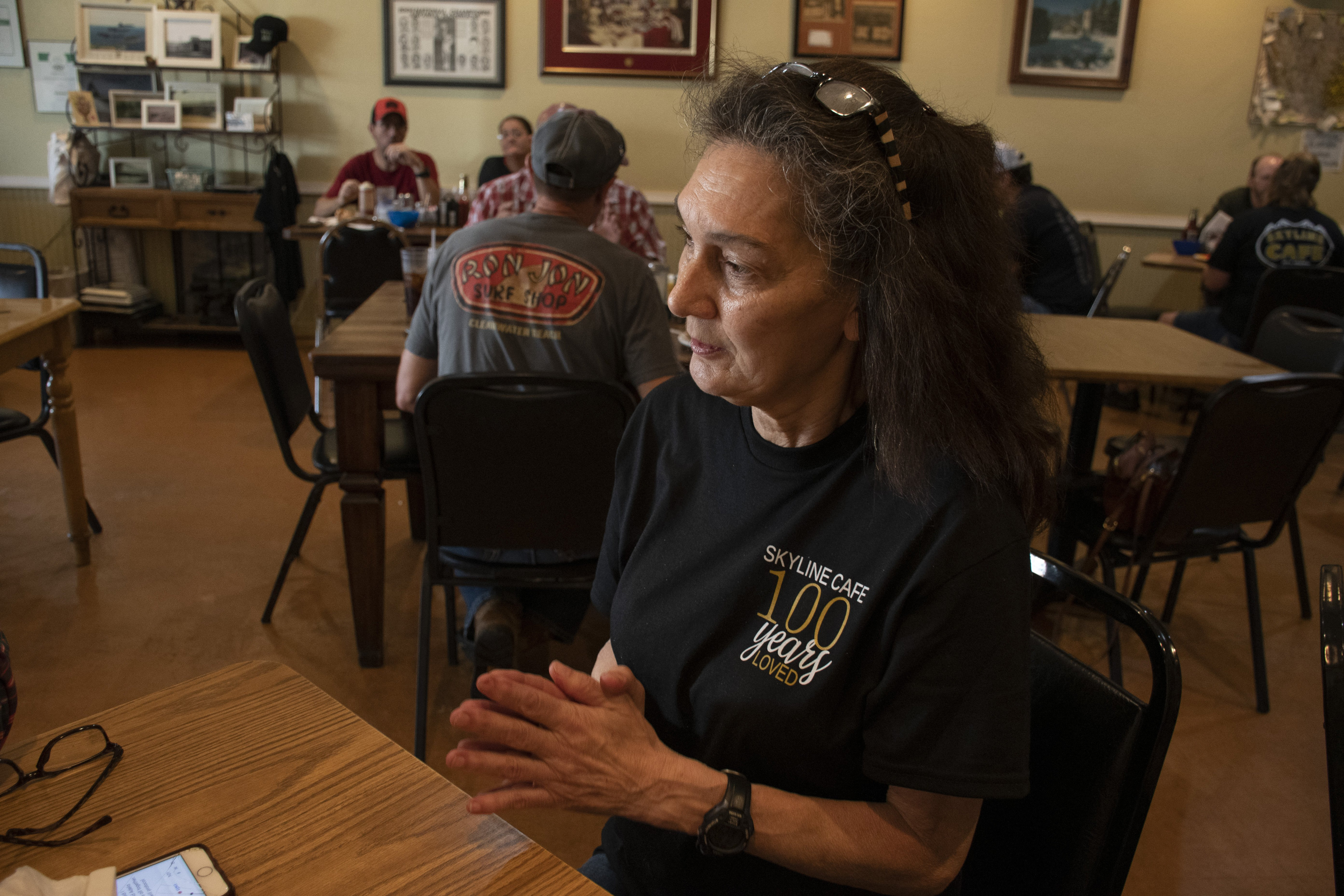 Candon Burrell is the current owner of the Skyline Cafe in Mena, which celebrated its 100th year in business during the Labor Day weekend. (Arkansas Democrat-Gazette/Cary Jenkins)  The restaurant has had several owners over the years. It started out as the Skyline Cafe, was later called the Harvey House, then went back to the Skyline Cafe, according to Shannon Clifford Faught, who has worked at the cafe for 10 years.

On April 1, 2002, current owner Candon Burrell, who started at the cafe as a waitress in the late '90s, bought the restaurant. She has taken a quick break from overseeing operations on this busy morning to visit our table, where we await our scrambled eggs, toast and home fries.

Burrell, a native of Crescent City, Calif., moved to Mena after her parents retired here. She has spent most of her life in the restaurant industry, working at eateries in Texas and New England and owning a pizza joint/video store in Penrose, Colo. It's a business she clearly loves.

"I've tried other things," the 62-year-old says. "I got in to data processing and that lasted about eight months. It was horrible. I always came back to the food industry. That's just where I feel good."

Things are a little different now than when she bought the cafe.

"When I took it over there was one waitress and one cook and we split doing the dishes," she says.

Back then they were open from 5:30 a.m.-2 p.m., and Burrell was often at the restaurant from 4 a.m.-4 p.m. seven days a week. Now she has 10 employees and, since the beginning of the pandemic, the Skyline's hours are 7 a.m.-2 p.m. Thursday-Monday. (A heads up for newbies: Take cash, as the cafe doesn't take debit or credit cards.)

"When covid hit, we had to switch things around," Burrell says. "And I'm getting old. I wanted to take a day off, so I decided to close on Tuesday and Wednesday."

"I love Candon's story," says Faught, who waits tables and handles the cafe's social media presence. "She worked here as a waitress, saw an opportunity to buy it and added her own touch to it. We have a good team here, and there's not a lot of turnover. We're family."

"I could not ask for a better staff," Burrell says. "I have the best staff in the world. What I love about them is that their work ethic is wonderful, and they will tell you how the cow ate the cabbage."

The menu is straightforward, stick-to-your ribs home cooking. Breakfast fare includes omelets, steak and eggs, ham, bacon, pancakes, biscuits and gravy, corned beef hash, grits, French toast and more. The corned beef hash, which Burrell learned to make when she was working at a restaurant in New England, is an absolute delight with its salty, crispy edges and fresh, juicy, flavorful center. So smitten are we that after splitting a plate with our two dining companions, we ask for two orders to go.

Burrell says that a couple of years ago she decided to keep count and found that the cafe serves more than 1,400 eggs over the course of a weekend.

Lunchtime selections include plate lunches with either a 6-ounce ribeye, fried pork chop, chicken fried steak, roast beef or chicken tenders. There are hand-pattied burgers along with a salad bar, homemade soup and chili and a nice selection of sandwiches like the Arkie Cheese Steak, French dip, Reuben, grilled chicken breast, tuna salad, BLT and more.

"Everything's really fresh," Burrell says. "I don't skimp, and I try to keep everything local, although that's not always a possibility."

Roger Bishop, who has lived in Mena for about 20 years, comes to the Skyline once or twice a week. Among his favorites on the menu are the pancakes and chicken fried steak.

"It's the best food, the best prices and the best service," he says. "That's pretty much all you're looking for."

Besides being a place to get a good meal at a good price, the Skyline is a space for regulars to gather.

"We have regulars come in every day," Burrell says. "We have guys that come in here that start battles and settle wars."

In November 2018, the cafe went viral when a video was posted showing diners standing for the national anthem sung by the Mena High School Choir.

"When the choir started singing, everybody put their utensils down and stood up," says Faught, who captured the video and posted it on social media. "It was the day before election day, and it was very emotional."

There have also been a few famous customers, including various governors. Actor Robert Mitchum ("Night of the Hunter," "Cape Fear," "Thirty Seconds Over Tokyo") would eat here when he visited Mena on fishing trips. There are two maps of the United States covered with pins indicating from where diners have traveled.

Judy McClara owns The Mercantile building next door to the Skyline, which is home to the Antique Boutique and Judy's Quilty Pleasures Quilt Shop. She has grabbed lunch from the Skyline — tuna salad on toast, her favorite — and is having it at her desk in her quilt store when we interrupt for a quick chat. Not only are McClara and Burrell business neighbors, they also live near each other.

"She's wonderful," McClara says. "We were just talking yesterday about the 100-year celebration. You know, they had extensive damage during the tornado and were closed [for several months], but they hung together and redid the building and reopened."

On April 9, 2009, a tornado struck Mena, killing three people and damaging hundreds of structures including houses, the Polk County Courthouse, Mena Middle School and others.

The Skyline Cafe was not spared. The front window was smashed and the 4-ton heating and air unit that was on the roof was blown more than a mile down the road.

"That left this big, gaping hole in the ceiling," Burrell says, just before dashing off to grab a bottle of Tabasco sauce for a diner. "It rained for days afterwards. We ended up gutting everything down to the bricks and redoing it."

A long counter that had been in the cafe had to be removed, though Burrell points out where the floor is scarred from decades of customers that sat at the counter scooting their chairs. The foundation for the small counter near the front door where customers pay is original to the building, she adds.

There's been a lot of talk about history this morning, but what does Burrell see for her future?

"I'll keep doing it until I can't do it anymore," she says. "I still like what I do. It's so great to have a job that you like. My job is to feed people. That's what I do."

Print Headline: A century of service