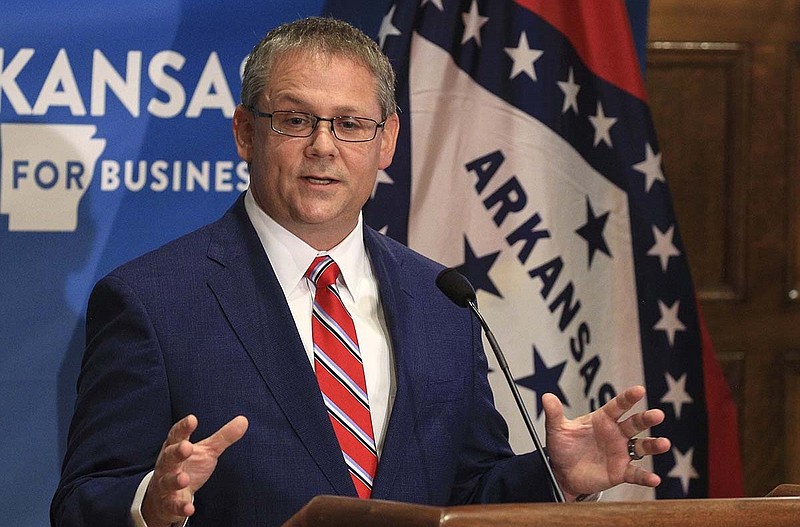 Secretary of State John Thurston speaks at the state Capitol in Little Rock in this July 2, 2020, file photo.

The Arkansas secretary of state has officially declared a proposed ballot measure that would legalize recreational marijuana as insufficient for inclusion on the November general election ballot, but officials say court proceedings are expected to continue.

John Thurston, secretary of the state, said Tuesday in a declaration to the Arkansas Supreme Court the proposed constitutional amendment is insufficient because the State Board of Election Commissioners did not certify the ballot title and popular name.

The state Supreme Court on Monday handed down a per curiam opinion that stated the court had issued a writ of mandamus to the secretary of state’s office to decide the sufficiency of the proposed initiative petition.

Steve Lancaster, counsel for Responsible Growth Arkansas, described the order as a “procedural step” to get clarification from the secretary of state. Lancaster said he remains confident the court will rule to keep the recreational marijuana issue on the ballot.

The decision is part of a weeks-long court battle in which two ballot question committees opposed to the proposed amendment were allowed to intervene in the case that will determine whether the amendment remains on the ballot.

Safe and Secure Communities filed its motion Aug. 24, stating the committee was created to “educate the public about the consequences of legalizing marijuana for personal use, and advocate for the defeat of an amendment to the Arkansas Constitution allowing the regulated sale of adult-use cannabis in the state.”

A week earlier the court had granted a request by the Save Arkansas from Epidemic committee, which stated it seeks to protect the interests and rights of Arkansans who oppose the legalization of recreational marijuana.

Officials for Responsible Growth Arkansas filed a response last month to the initial motion to intervene, saying it came too late in the expedited proceeding without explanation, poses prejudice to petitioners by interjecting new issues when time is running short, and is unnecessary because respondents adequately represent intervenors’ interests.