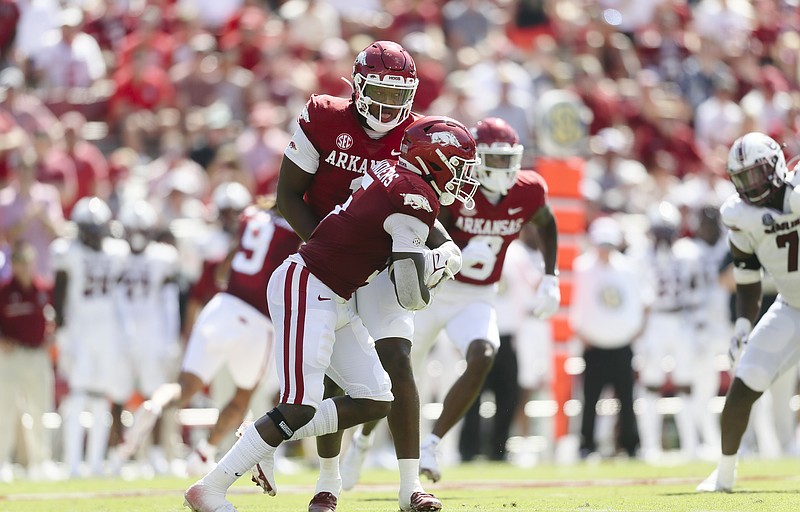 Isn’t it nice, Razorback fans, to be able to speak these words: “The University of Arkansas is in the AP Top 10.”

It might not last, but it feels good for now. The Razorbacks’ 44-30 victory over South Carolina was another display of Sam Pittman football as Arkansas’ offensive line dominated. That led to 295 yards on the ground and five rushing touchdowns. Raheim Sanders had a career-high 156 yards with two touchdowns.

On defense, meanwhile, the Razorbacks had three takeaways, six sacks and nine tackles for loss.

For the first time since 2003-04, Arkansas has won back-to-back Southeastern Conference openers. Arkansas now leads the series with South Carolina 14-10.

We were 8-2 on the picks last week, making the record 18-2 for the season. Here are the picks for this week’s games:

Arkansas 43, Missouri State 27 — In an appearance before the Little Rock Touchdown Club on Monday, Paul Finebaum called Petrino a “reformed man” and warned Arkansas not to take this game for granted. Pittman won’t let that happen against an FCS foe. The Bears are off to a 2-0 start with victories of 27-14 over UCA and 35-30 over Tennessee-Martin. The Arkansas players are too young to remember much about the Petrino era in Fayetteville, but most of the fans aren’t. It will be louder than usual for a nonconference game in Fayetteville on Saturday night.

Memphis 31, Arkansas State 29 — ASU is 1-1 following the expected whipping at the hands of Ohio State. The Buckeyes rolled to a 45-12 victory as C.J. Stroud had 351 yards of offense. He completed 16 of his 24 passes and had four touchdowns. Memphis is 1-1. The Tigers fell 49-23 to Mississippi State in their opener and then came back Saturday with a 37-13 victory over Navy. We’ll give Memphis the slight edge in this one since the Tigers are home at Simmons Bank Liberty Stadium.

UCA 24, Idaho State 23 — The Bears must make the long trip to Pocatello, Idaho, to take on an 0-2 Idaho State team that has lost 52-21 to UNLV and 38-7 to San Diego State. UCA is also 0-2. Its loss to Missouri State was followed by a 59-3 whipping at Ole Miss. Both of the Rebel quarterbacks had success against the Bears in a game that the Rebels led 31-0 at halftime. This is a tough one to call as it’s looking like both UCA and Idaho State will have down years.

Oklahoma State 59, UAPB 7 — A Golden Lion football team is 2-0 in the fall for the first time since 2000. UAPB picked on a tiny NAIA independent from Texas called North American last Saturday night and won 76-3. It was the fifth most lopsided victory since the school began football in 1916. Now, as is the case with most FCS schools, UAPB must play a Power 5 team in order to collect the check. It will be ugly. Let’s just hope the Golden Lions don’t get any key players hurt before SWAC play begins.

Harding 30, Southern Arkansas 22 — The defending Great American Conference champions from Harding moved to 2-0 following a 38-13 victory over 1-1 Southeastern Oklahoma, which was the only school to down the Bisons last year in the regular season when Harding went 10-1. The 2-0 Bisons host Southern Arkansas, which fell to 1-1 with a 24-20 loss at 1-1 Southwestern Oklahoma. Southwestern outscored the Muleriders 10-0 in the fourth quarter of that game. Harding is now up to No. 7 in the American Football Coaches Association NCAA Division II poll.

Ouachita 34, Arkansas Tech 25 — Ouachita moves up to No. 10 in the AFCA poll following its 45-0 shutout of 0-2 Southern Nazarene. The 2-0 Tigers, who have won five of the 10 GAC titles since the league was formed, are 45-4 in their past 49 regular-season games. Tech should be 2-0 and is much improved from last season. The Wonder Boys lost their opener in double overtime to Southeastern Oklahoma and then bounced back for a 35-13 victory over 0-2 East Central Oklahoma. Quarterback Taye Gatewood threw for three touchdowns and ran for another in that victory. Ouachita saw senior tailback T.J. Cole rush for 154 yards and two touchdowns in the victory over Southern Nazarene.

Henderson 33, UAM 28 — The Reddies and Boll Weevils are both 2-0 coming into Saturday night’s game at Arkadelphia. Henderson made its longest road trip of the season and came home with a 51-27 victory over 0-2 Northwestern Oklahoma. Henderson head coach Scott Maxfield is now tied with the legendary Ralph “Sporty” Carpenter with 119 victories at Henderson. Carpenter was the head coach there from 1971-89. UAM was at home Saturday and posted a 40-17 victory over 0-2 Oklahoma Baptist as Jonero Scott rushed for 175 yards and two touchdowns.