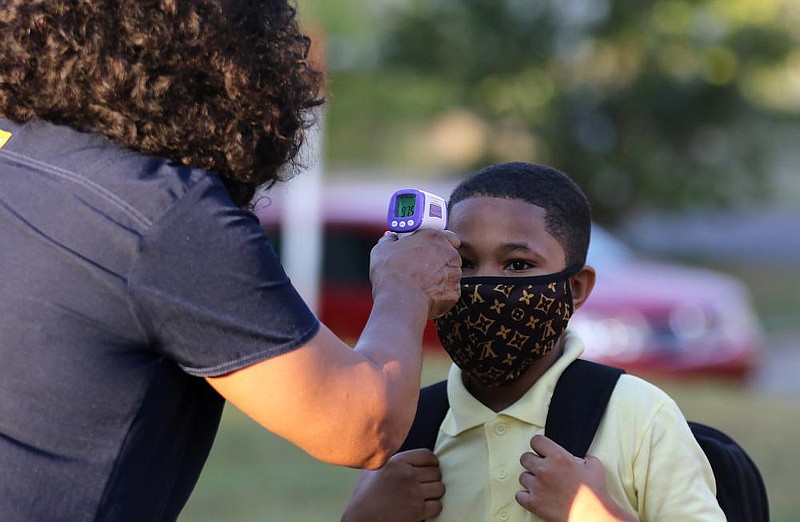 New coronavirus cases among children in Arkansas appear to be on the decline after an uptick in infections -- linked to the start of the 2022-23 school year -- peaked around Labor Day weekend, a state health official said Monday.

"It does seem as though the case rate within those 18 and younger has turned down," State Epidemiologist Mike Cima said.

"It started turning down last Monday or Tuesday, and it's continued to go down."

Cima's comments came as the number of people reported to be hospitalized in Arkansas with covid-19 fell Monday to its lowest level in more than two months.

Meanwhile, the state didn't record any new covid-19 deaths on Sunday or Monday, leaving the official death toll at 11,961.

Data on Arkansas' covid-19 cases and hospitalized patients was not updated on the state Department of Health's online dashboard on Sunday, and the case numbers for Sunday were still not available from the department on Monday.

An update to the dashboard on Monday, however, indicated that the state's count of cases had risen by 620 since Saturday, down from a rise of 922 cases over the same two-day stretch a week earlier.

Infections among children, who represent about 23% of Arkansas' population, accounted for about 16% of the cases added Sunday and Monday.

"It kind of follows the laws of gravity -- what goes up has to come down," Cima said.

"There's not an infinite number of people that are susceptible or continue to be susceptible. Eventually the virus is going burn itself out, for the lack of a better term."

The rise in infections among children had been blamed for a slight upward trend in Arkansas' overall new case numbers starting in mid-August.

Among other age groups, new cases had been on the decline following the peak in July of a summer surge fueled by new versions of the omicron variant.

Cima said that, as new infections overall were climbing in June and July, the infection rates for children remained lower than those for older age groups.

As a result, compared to adults, fewer children had immunity developed through recent infections when they began returning to classrooms last month.

Cima said the state saw a similar uptick at the start of the 2021-22 school year, and it was also short-lived.

Unlike some other holidays that have led to spikes in cases, this past Labor Day doesn't appear to have changed the downward trajectory of the state's new case numbers.

"My expectation is that there's not going to be a meaningful bump as a result of that holiday," Cima said.

Also on Monday, Health Department spokeswoman Danyelle McNeill said the state late last week ordered an additional 20,100 doses of the Pfizer vaccine that was revamped to target the original strain of the coronavirus as well as the omicron strains that are now responsible for most infections.

She said 14,700 of the doses had arrived in the state as of Monday.

Those doses are on top of 27,000 doses of Pfizer and 21,500 doses of the similarly updated Moderna vaccine ordered by the state that had been delivered as of Friday.

The U.S. Food and Drug Administration on Aug. 31 authorized both vaccines for use as booster doses for people who received their last booster or primary series dose at least two months earlier.

Additional doses of the Moderna vaccine aren't expected to be available to the state until next week, McNeill said.

After rising Sunday by five, the reported number of covid-19 patients in the state's hospitals fell Monday by 10, to 258, below the previous two-month low of 261 that the number reached a week earlier.

The number as of Monday was the smallest since July 4.

Pulaski County had the largest increase in cases, 107, from Saturday to Monday, followed by Benton County with 53 and Craighead County with 51.

The average daily increase in the state's case count over a rolling seven-day period fell from 780 as of Saturday to 737, which was down from an average of 979 a day the previous week.

A total of 10,128 cases in the state were considered active, or currently infectious, on Monday, down from 11,276 as of Saturday and 11,710 the previous Monday.

The number of the state's virus patients who were in intensive care rose Sunday by one and Monday by eight, bringing it to 55.

The number on ventilators fell Sunday by two before rising Monday by four, to 16.

At its hospitals in Little Rock and Springdale, Arkansas Children's had 14 covid-19 patients on Monday, down from 19 on Friday, spokeswoman Hilary DeMillo said.