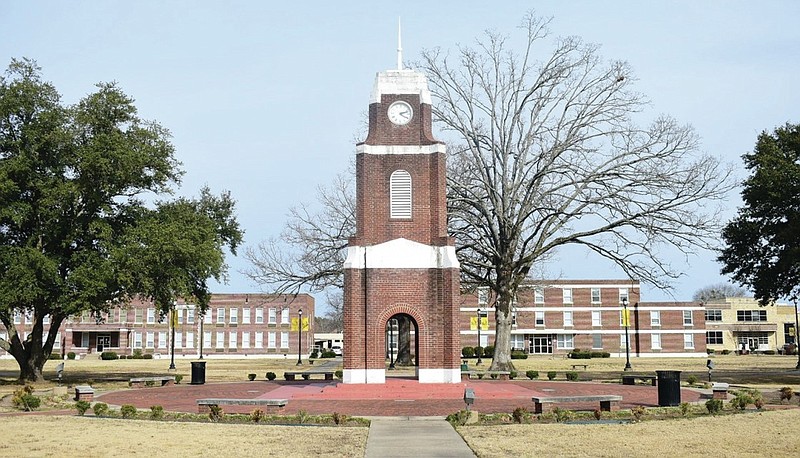 FILE — The University of Arkansas at Pine Bluff campus is shown in this Jan. 20, 2021, file photo. (Pine Bluff Commercial/I.C. Murrell)

The University of Arkansas at Pine Bluff put Saturday's home victory over North American University out of reach before halftime and won 76-3.

In a game where Coach Doc Gamble promised to go deep into his roster, 12 different players scored for the Golden Lions, who are now 2-0 heading into this weekend's game at Oklahoma State University.

Much was accomplished in one game, but as Gamble clarified after the game, the only goal was to be 1-0 for the week.

"I thought we were going to have a chance to play a lot of guys, and that was expected," he said. "The only thing we didn't want to have coming in here was be up 17-0 at halftime and then giving a chance to build some confidence, so I think we took care of that. That was good for us."

Saturday's win was played in front of just 6,237 fans, just one shy of the Week 1 attendance for the Lane College game, at 16,000-seat Simmons Bank Field at Golden Lion Stadium. But there's nothing small about the 55,509-seat theater in Stillwater, Okla., called Boone Pickens Stadium where the eighth-ranked Cowboys (2-0), last season's Fiesta Bowl champions, will host the Lions.

Saturday's warm-up act against North American did serve a purpose for UAPB, which already has matched last season's win total.

"I would definitely say it's a big step for us because last week we didn't play so good, to our fullest potential," said Kyle Knox, who returned an interception 55 yards for a touchdown before halftime, in reference to a 48-42 win over Lane. "But I feel like this week, we've stepped up and it's getting us ready for next week."

Quarterback Skyler Perry avoided turnovers and completed 10 of 11 passing attempts against North American (0-2), taking heed of Gamble's challenge of being flawless as a fifth-year standout. Backup Jalen Macon went 4 for 5.

Coming off a win over the University of Notre Dame in the Fiesta Bowl, Oklahoma State had a season-opening offensive foot race of its own, knocking off Central Michigan University 58-44 on Sept. 1 and then holding off Arizona State University 34-17 this past Saturday. Both games were in Stillwater.

Both Oklahoma State and UAPB have been prolific on offense so far in 2022. The Cowboys average 498 total yards per game, with redshirt senior Spencer Sanders averaging 337 passing yards while taking every snap this season.

"I told the team that overall, on paper – whatever paper means, it didn't mean a lot last week – but on paper, people are going to say you're more athletic and a more talented team. I'm okay with that," 18th-year Pokes Coach Mike Gundy said Monday. "I'm stressing the importance of focus. I'm stressing the importance of us improving in all three phases and also we understand we always respect whoever we play."

Back on the big stage

Oklahoma State is the highest-ranked Football Bowl Subdivision opponent UAPB has ever faced and the third one ever, following Texas Christian University in 2019 and University of Arkansas in 2021. Those two opponents were not ranked in the Associated Press poll when they faced UAPB, but beat the Lions handily.

UAPB agreed to take on Oklahoma State as part of its deal with Arkansas to relocate last year's game from Fayetteville to Little Rock.