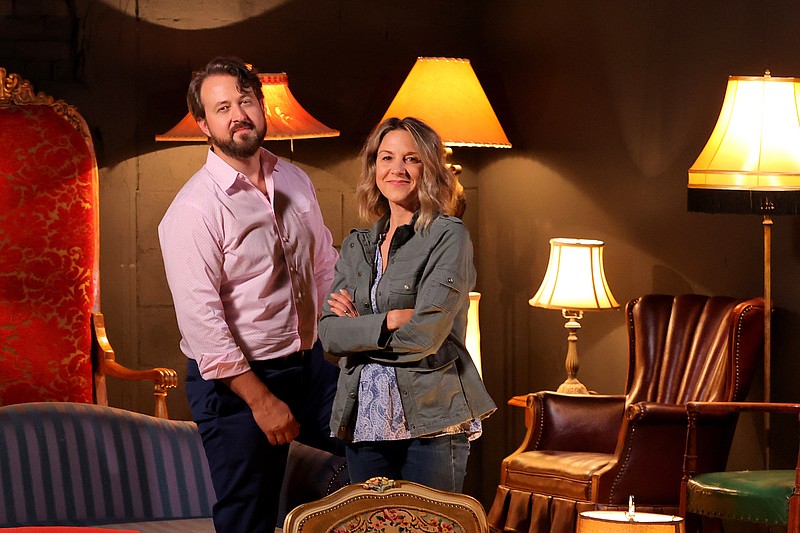 Chad Bradford stars in the one-person show “Every Brilliant Thing,” in the Black Box through Oct. 23 at the Arkansas Repertory Theatre. He stands beside director Ginna Hoben. (Special to the Democrat-Gazette/Stephen Thornton)

The Arkansas Repertory Theatre is opening its 2022-23 season with a one-person show that tackles sensitive topics involving mental health and suicide.

But "Every Brilliant Thing" by Duncan Macmillan with Jonny Donahoe, sees them through the perspective of a young child trying to help his ailing mother find all the reasons life is worth living.

Previews of the show, in the Rep's Second Mezzanine "Black Box" performance space, run today-Thursday, with official opening on Friday and running, Tuesday-Sunday, through Oct. 23.

Little Rock native Chad Bradford plays the 6-year-old who, with his mother in the hospital "and finding it hard to be happy," according to the theater's description of the play, starts making a list of "everything that's 'brilliant' about the world. Everything that's worth living for. Soon, the list will take on a life of its own."

"We never think about it as a play about suicide — it's about happiness and reasons for living," director Ginna Hoben says.

"It's a perfect play — the structure, word choice, the special concept written into the script, the way the audience is addressed, without awkwardness. It takes care of and welcomes the audience in."

"It's unexpectedly heartbreaking and [heart]warming, at the same time," Bradford adds. "It's one of the most unique pieces I've ever done. Out of the ordinary."

"Out of the box, without being weird," Hoben concludes.

It's also unique for Bradford in that it's his first one-person show, and he says he's excited to work with Hoben, "whom I call the 'Queen of the One-Person Show' — she's done and written so many."

Hoben's official biography stresses her specialization "on the writing, acting, directing of and consulting on one-person plays." She premiered "The Twelve Dates of Christmas" at American Shakespeare Center in Stanton, Va., in 2010; another solo play, "No Spring Chicken," premiered at Washington's 2015 inaugural Women's Voices Theatre Festival.

Hoben was herself the solo performer for a production of "Every Brilliant Thing" this past summer at American Shakespeare Center. "No one has said as much," she says with a chuckle, but presumably if something happens to Bradford, she's the understudy. Or could be. 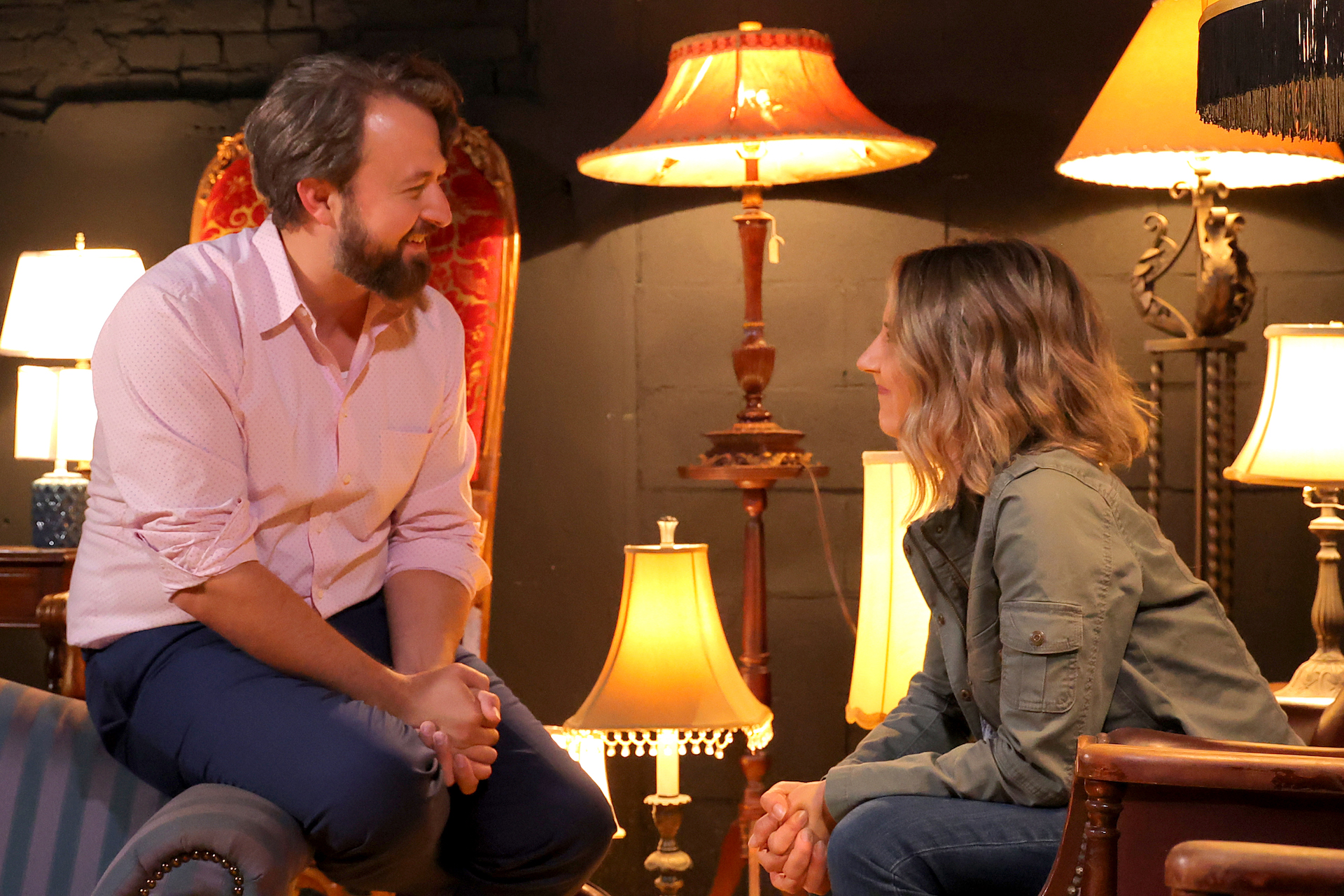 Chad Bradford and director Ginna Hoben share a moment on the set of “Every Brilliant Thing” in the Black Box at the Arkansas Repertory Theatre. (Special to the Democrat-Gazette/Stephen Thornton)  And the unique nature of the script "allows for the performer to bring himself or herself or themselves to the role," she explains. It started out as a monologue that Macmillan wrote, and was originally performed by a female actor, she says. He subsequently started to perform it himself; meanwhile, it continued to grow. Once Donahoe, a talented improviser, got hold of it, he got permission from Macmillan to explore adding some of his own elements, and Macmillan recognized them as so good, he kept them.

What Hoben describes as "a fluid script" allows each actor to add levels of interpretation and improvisation; Bradford adds that as a performer, "you find your own dialogue through improvisation and rehearsal." He describes the biggest challenges as "keeping my stamina, improvisation and audience interaction, and for it to stay fresh, to not take it for granted."

Meanwhile, "I felt really compelled to find differences" from her own recent production in directing this one, Hoben says. Among them: performing in the round and the addition of Bradford's music.

"As both a director and actor, I'm really into script analysis," she explains, and having just done the show, "so much homework was complete when Will [Trice, the Rep's executive artistic director] called."

The show swapped places on the Rep's schedule with Neil Simon's "Laughter on the 23rd Floor," centering on Emmy-nominated actor Judge Reinhold, which has moved to the Jan. 31-Feb. 19 slot that "Every Brilliant Thing" originally occupied. The theater at the time it announced the switch explained, without specifics, that it was because of a scheduling conflict with an actor.

Bradford says the change didn't cause any disruptions for him — "it just hastened the memorization," he says.

Bradford was on the Rep stage in the spring, filling in as the Baker in the final week of the run of Stephen Sondheim's "Into the Woods." He has also served as a fight coordinator there.

He recently accepted the job of managing director of the Arkansas Shakespeare Theatre, headquartered at the University of Central Arkansas in Conway (Bradford's alma mater), where has appeared as a performer (Bill Sikes in "Oliver!" and Harold Hill in "The Music Man") and composer (he provided music for and setting portions of William Shakespeare's "Much Ado About Nothing" to music in a production this summer).

The new job has precipitated a move back from New York to Central Arkansas with his wife, actress-producer Sharon Combs, who, Bradford says, "is expecting in February" when they would have originally been putting this show together. So the schedule swap is even a bonus in that sense. Combs is now teaching theater at the University of Arkansas-Pulaski Technical College.

Bradford and Hoben have worked together onstage at the American Shakespeare Center, in a couple of four-century-old plays — "Women Beware Women" by Thomas Middleton ("it's rarely done, highly traumatic, hard to pull off for modern audiences," Hoben says) and "Sea Voyage" by John Fletcher and Phillip Massinger, Shakespeare's 17th-century successors as playwrights for the King's Men. Hoben says it was the first production of the play, inspired by Shakespeare's "The Tempest," in 400 years.

The advantage of having worked at the same institution, Hoben says, means that they share a language, techniques and a kind of theatrical shorthand, and "our instincts are already kind of the same."