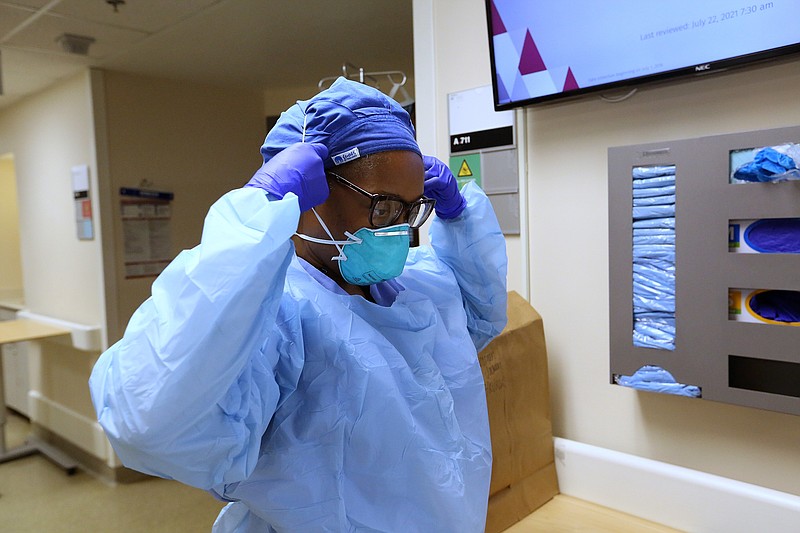 A day after hitting a new two-month low, the number of people hospitalized with covid-19 in Arkansas jumped back up Tuesday to its highest level in almost a week.

With recoveries outnumbering new cases, however, the number of cases in the state that were considered active dropped below 10,000 on Tuesday for the first time since late June.

The state's death toll from the virus, as tracked by the Department of Health, rose by three, to 11,964.

Health Department spokeswoman Danyelle McNeill said all the deaths reported Tuesday happened more than a month earlier. One occurred in January, one was from March and one was from July, she said.

After falling by 10 a day earlier, the number of covid-19 patients in Arkansas hospitals rose Tuesday by 18, to 276, its highest level since Sept. 7.

The state's total count of cases rose by 841.

That was almost twice the size of the increase the previous Tuesday, although the rise that day was likely affected by a slowdown in testing and reporting around Labor Day.

After falling the previous seven days, the average daily increase in the state's case count over a rolling seven-day period rose Tuesday to 796.

That was still down from an average of 842 a day the previous week.

The number of cases that were considered active, representing people who are potentially still infectious, fell by 476, to 9,652.

It was the first time the active case total had been below 10,000 since June 27.

Despite the increase in the number hospitalized, McNeill said the state's new case numbers appeared to still be on the decline after rising slightly for a few weeks after the start of the 2022-23 school year.

"It's difficult to pinpoint the reason for the jump" in hospitalized patients, McNeill said in an email.

"We have noticed that hospitalizations have been increasing at the beginning of the week and tapering off toward the end of the week. We will have to see what happens in the next few days."

McNeill on Tuesday also provided information on the state's case numbers that hadn't previously been available after much of the data on the department's online coronavirus dashboard failed to update Sunday.

According to the figures she provided, the state's count of cases rose by 335 on Sunday and 285 on Monday -- both down from the daily increases a week earlier.

Also on Tuesday, McNeill said Arkansas had received all of the 20,100 doses of the updated Pfizer vaccine that it ordered late last week.

Those doses were on top of the 48,500 doses of revamped Pfizer and Moderna vaccines ordered by the state that had arrived as of Friday.

The doses have been shipped to Health Department local health units, hospitals and pharmacies.

Some of the doses are then redistributed to other providers.

Both vaccines target the original coronavirus strain as well as two strains of the omicron variant that are now responsible for most infections.

The U.S. Food and Drug Administration on Aug. 31 authorized the two vaccines for use as booster doses for people who received their last booster or primary series dose at least two months earlier.

The Pfizer vaccine was cleared for people 12 and older. Moderna's was authorized for those 18 and older.

Providers in Arkansas had reported administering the boosters to 8,513 people as of Tuesday, McNeill said.

She said the boosters are available at many of the department's local health units around the state, and the department was working to distribute them to the others.

Units that have the doses have been seeing "moderate" demand so far, she said.

After rising the previous two days, the number of covid-19 patients in Arkansas who were in intensive care remained Tuesday at 55.

Growing for the second day in a row, the number on ventilators rose by two, to 18.

At its hospitals in Little Rock and Springdale, Arkansas Children's had 13 covid-19 patients on Tuesday, down from 14 on Monday, spokeswoman Hilary DeMillo said.