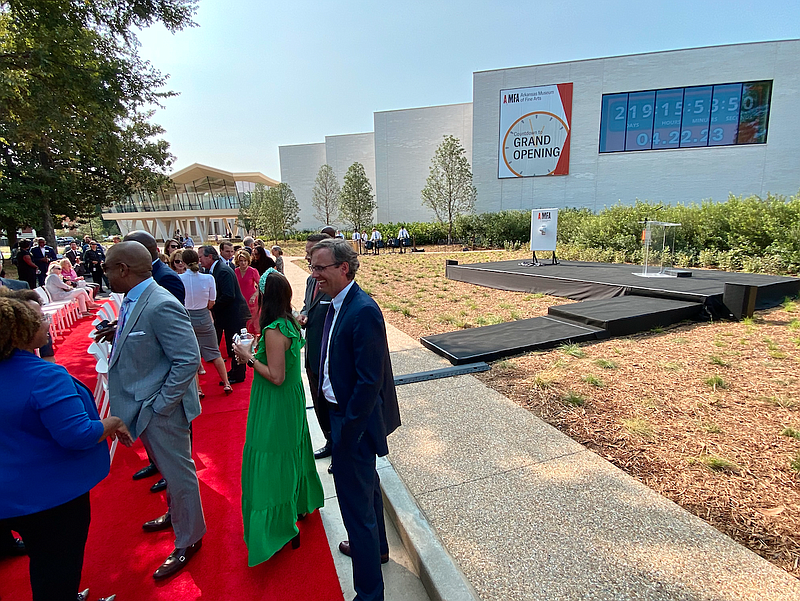 The Arkansas Museum of Fine Arts will hold its grand opening April 22, 2023.

Museum officials, board members and Little Rock Mayor Frank Scott Jr. flipped a ceremonial switch Wednesday morning at the museum, West Ninth and Rock streets, to start the countdown clock, which is now visible through the 32-foot, second-floor “Art Perch” windows on the museum’s northwest side overlooking West Ninth Street.

The opening signals the end of a nearly three-year rebuild. Part of the announcement took place in the north courtyard, in front of the once-and-future main entrance, the original museum’s 1937 facade, which architect Jeanne Gang of Chicago-based Studio Gang “rescued” and returned to prominence. The facade had been used as a separator between galleries inside the Arts Center.

The opening had been postponed at least twice because of construction delays on the museum, in part incorporating and in part replacing what had been known since the early 1960s as the Arkansas Arts Center.

Harriet and Warren T. Stephens, co-chairs of the AMFA Capital Campaign, announced that the campaign had reached $150.4 million, surpassing its most recent goal, through what Warren Stephens, also the chairman of the AMFA Foundation, described as “an incredible outpouring of support.”

A new goal of $155 million will add money to the museum endowment to help sustain the museum once it opens.