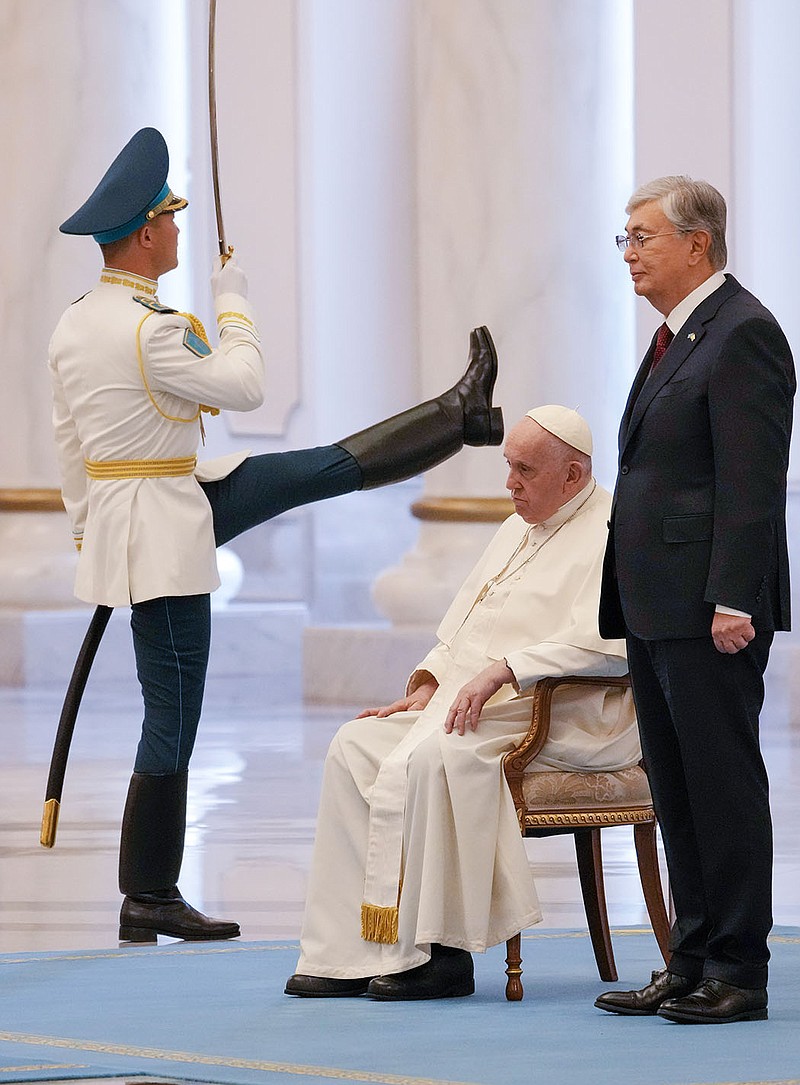 Pope Francis is received by an honor guard as he arrives at the Presidential Palace Ak Orda with Kazakhstan's President Kassym-Jomart Tokayev, in Nur-Sultan, Kazakhstan, Tuesday, Sept. 13, 2022. Pope Francis begins a 3-days visit to the majority-Muslim former Soviet republic to minister to its tiny Catholic community and participate in a Kazakh-sponsored conference of world religious leaders. (AP Photo/Andrew Medichini)

NUR-SULTAN, Kazakhstan -- Pope Francis begged for an end to Russia's "senseless and tragic war" in Ukraine as he arrived Tuesday in the former Soviet republic of Kazakhstan to join faith leaders from around the world in praying for peace.

Francis flew to the Kazakh capital of Nur-Sultan to meet with President Kassym-Jomart Tokayev for an official state visit portion of his three-day trip. Today and Thursday, he will participate in a government-sponsored triennial interfaith meeting, which is gathering more than 100 delegations of Muslim, Christian, Jewish, Buddhist, Shinto and other faith groups from 50 countries.

The 85-year-old Francis made the trip despite having strained knee ligaments that have reduced his mobility all year. Doctors have told him that for the time being, any further travel -- to Kyiv, for example -- is out of the question.

Speaking upon his arrival to government authorities and diplomats gathered at the Qazaq concert hall, Francis praised Kazakhstan's commitment to diversity and dialogue and its progress from decades of Stalinist repression, when Kazakhstan was the destination of hundreds of thousands of Soviet deportees.

Francis said the country, which borders Russia to the north and China to the east and is home to some 150 ethnic groups and 80 languages, now has a "fundamental role to play" in helping ease conflicts elsewhere.

Recalling that St. John Paul II visited Kazakhstan just days after the Sept. 11, 2001, attacks in the U.S., Francis said he was visiting "in the course of the senseless and tragic war that broke out with the invasion of Ukraine."

"I have come to echo the plea of all those who cry out for peace, which is the essential path to development for our globalized world," he said.

Directing himself at global superpowers, he said expanding efforts at diplomacy and dialogue were ever more important. "And those who hold greater power in the world have greater responsibility with regard to others, especially those countries most prone to unrest and conflict."

"Now is the time to stop intensifying rivalries and reinforcing opposing blocs," he said.

Tokayev didn't mention Ukraine specifically in his prepared remarks to Francis. But speaking in English, he referred in general terms about humanity being on the "edge of an abyss as geopolitical tensions escalate, global economy suffers and mushrooming religious and ethnic intolerance becomes the 'new normal.'"

Kazakhstan has had to walk a thin line with the war. Tokayev has vowed to respect Western sanctions against Russia while trying to maintain close ties with Moscow, an important economic partner and ally.

At the same time, Tokayev refused to recognize the Russia-backed separatist "people's republics" in Ukraine that Moscow recognized days before invading Ukraine.

Francis was supposed to have met with the head of the Russian Orthodox Church on the sidelines of the conference. But Patriarch Kirill, who has supported the war in Ukraine, canceled his trip last month.

Francis is also going to be in the Kazakh capital at the same time as Chinese President Xi Jinping, who is making his first foreign trip since early in the coronavirus pandemic.

The Vatican and China haven't had diplomatic relations for a half century and the timing is somewhat tense, with the two sides finalizing the renewal of a controversial deal over the nominations of Catholic bishops in China.

The Vatican has said there were no current plans for any meeting between Xi and Francis while they were in Kazakhstan. The Kazakh deputy foreign minister, Roman Vassilenko, said he didn't believe there was time in Xi's schedule to meet with Francis.

Asked about the possibility en route to Nur-Sultan, Francis said, "I don't have any news about this. But I am always ready to go to China."

The interfaith congress, now in its seventh iteration, is a showpiece of Kazakhstan's foreign policy and a reflection of its own multicultural and multiethnic population that has long been touted as a crossroads between East and West.

Sophia Gatovskaya, a parishioner at Our Lady Of Perpetual Help Cathedral in the capital, said she attended that first papal visit and it has borne fruits to this day.