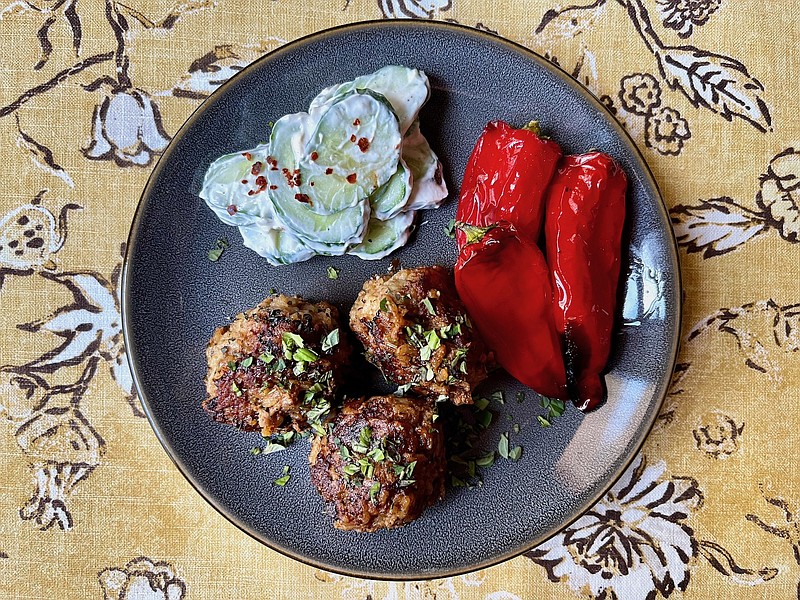 Avgolemono soup is hands down my favorite Greek dish. The soup, when done right, is simultaneously rich and velvety, yet brightly rejuvenating. So when this lemony recipe landed in my inbox, I knew I had to try it.

The introduction for the recipe in Milk Street Tuesday Nights read, "In the Greek dish called youvarlakia avgolemono, beef and rice meatballs dot a lemony soup that's rich and velvety with egg yolks. To simplify, we pair the meatballs with a quick pan sauce inspired by Greek ladolemono, a simple sauce of lemon, olive oil and sometimes herbs."

Milk Street calls the recipe Greek Beef and Rice Meatballs With Lemon-Olive Oil Sauce, but because I made them with ground turkey instead of beef, I changed the name. I also switched up the herbs because I didn't have a full quarter cup of fresh dill. I ended up using a mix of oregano, thyme, basil, mint and dill and I don't regret it at all.

The lemon and fresh herbs really make these meatballs. Their flavors are lively, keeping the dish from being too heavy, yet the rice makes the meatballs filling and satisfying. Together the sauce and meatballs capture the same essence that I love in avgolemono soup.

In a large bowl, mash the rice with a fork until smooth and pasty. Add the bread, ¼ cup of broth, 2 tablespoons of the herbs, 1 teaspoon salt and 1 teaspoon pepper. Using your hands, mix and mash the ingredients to a paste. Add the meat, egg yolk, half of the garlic and the dried oregano, then mix with your hands until the mixture is homogeneous. Divide into 12 portions, form into smooth balls and place on a plate. Refrigerate, uncovered, for about 10 minutes.

In a 12-inch nonstick skillet over medium-high (see note), heat 2 tablespoons of oil until shimmering. Add the meatballs and cook without disturbing until lightly browned on the bottoms, about 3 minutes. Carefully turn the meatballs and cook until browned on the second sides, about another 3 minutes. Add the remaining garlic and cook, stirring, until fragrant, about 30 seconds. Add the remaining ¾ cup broth, then scrape up any browned bits. Bring to a simmer, then cover, reduce to medium-low and cook, gently stirring once or twice, until the centers reach 165 degrees, 5 to 7 minutes.

Using tongs, transfer the meatballs to a plate and tent with foil. Bring the liquid in the pan to a boil over medium-high and cook, stirring occasionally, until thick enough that a spatula drawn through it leaves a trail, 2 to 3 minutes. Turn off heat, whisk in the remaining 3 tablespoons olive oil and the lemon juice. Taste and season with salt and pepper. Return the meatballs to the skillet, turning them to coat in the sauce. Sprinkle with the remaining herbs and serve.