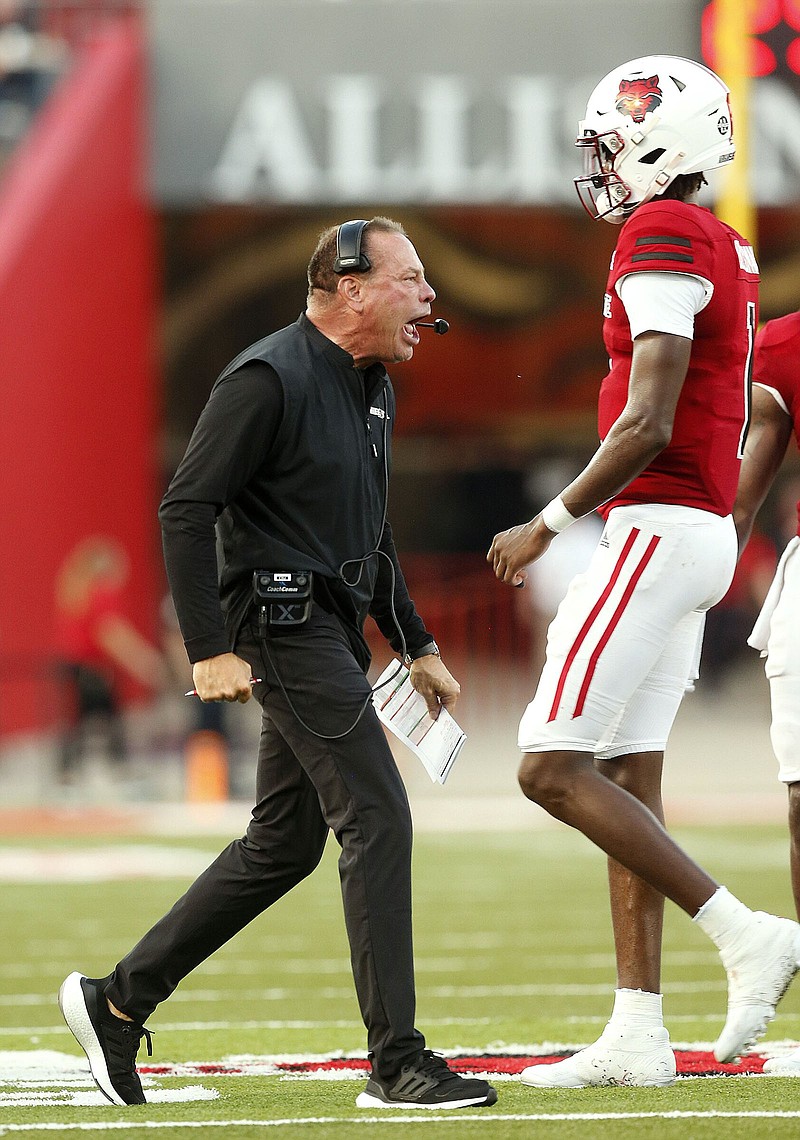 Arkansas State head coach Butch Jones yells to his players during a timeout in the second quarter of the Red Wolves' win on Saturday, Sept. 3, 2022, at Centennial Bank Stadium in Jonesboro. .More photos at www.arkansasonline.com/94asugram/.(Arkansas Democrat-Gazette/Thomas Metthe)

That would be the "middle eight" -- a term pioneered by New England Patriots Coach Bill Belichick for the final four minutes of the second quarter and the first four of the third quarter.

The numbers suggest it's as critical of a segment of the game as any. From 2014-18, college football teams that won the "middle eight" of a game went on to win the game 74% of the time.

For so much of last season, Arkansas State's biggest problem was starting off slowly. A hot start this season against Grambling State and sticking with No. 3 Ohio State for 25 minutes Saturday suggests the Red Wolves may be on their way to remedying those woes.

But what about getting off on the right foot after halftime?

"When we started the first half, we had the intensity, we had the mindset," Coach Butch Jones said during his Tuesday news conference. "We started [the second half] slow. ... I think you saw the maturity of a veteran football team in Ohio State come out, and they tried to end it in the third quarter."

Not only did the Buckeyes score touchdowns on three of their four third-quarter series, but they also did so in 2:45 or less each time.

Ohio State outgained ASU 206-34 despite running one fewer play in the third quarter.

"It's the little things that we've got to hone in on," Arkansas State defensive end Kivon Bennett said. "It's about execution and assignment and alignment. ... We've got to do a better job of being more prepared at halftime and keeping that same intensity throughout all four quarters."

At the same time, the Red Wolves acknowledged those problems last season. They frequently spoke about fixing those flaws, only for them to flare up again.

Any bad stretch against a Memphis team that scored 55 points against the Red Wolves last year in Jonesboro could bury ASU on Saturday.

Bennett said he doesn't want to wait to get things right this season.

"Nobody's just going to walk in on Saturday and be prepared if you don't prepare as well as you can during the week leading up to the game," he said. "It's just [about] going a little harder in practice."

Like postgame Saturday, Jones pointed to the "small victories" the Red Wolves achieved in Columbus, Ohio.

They included a fourth quarter in which ASU shut out Ohio State and held the Buckeyes to 33 yards as well as a 4-for-4 outing for kicker Dominic Zvada.

But even more important to Jones is that his team commits to being better for its mistakes.

"It's a week-to-week season," Jones said. "You have to recreate yourself every single week. You have to build upon your experiences from the first two weeks -- good, bad and indifferent -- and continue to move on."