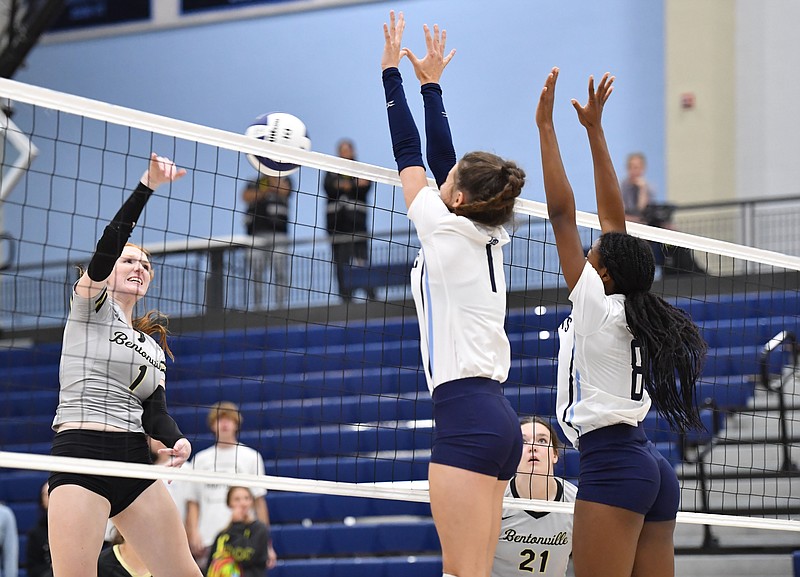 SPRINGDALE -- Springdale Har-Ber entered Tuesday's match against Bentonville leading the Lady Tigers by a half-game for third place in the 6A-West.

Behind a breakout game from junior middle blocker Korlynn Hall, Har-Ber defended its spot in the standings with a 22-25, 25-19, 25-17, 25-23 win over Bentonville inside Wildcat Arena.

"I'm so proud of our kids," Har-Ber coach Cassie Loyd said. "We have shown so much growth, like we just talked about in the locker room, in the past two weeks. Something that we weren't doing two weeks ago was finishing sets, and that's something that I feel like they did really well, they believed in themselves. They stayed consistent and were awesome teammates."

The opening set featured both teams going on big runs. After Har-Ber claimed a lead off an ace from junior Kinley Cobb, the Lady Tigers rallied and scored 12 straight to take a 21-11 lead.

That's when the Lady Wildcats decided to go on a streak of their own. After scoring seven straight to get back in the game, a block from Hall brought the Lady Wildcats within 22-19. Har-Ber took advantage of a few Lady Tigers miscues and was able to close the gap to one, forcing Bentonville coach Allison Venable to call a timeout.

"I think that was a turning point for the match tonight," Loyd said. "Starting out down that much but then our kids having the belief that it doesn't matter how much we're down, that we can do anything we can set our minds to if we stay consistent and be positive, good teammates."

Bentonville responded, and a game-ending ace from Gloria Cranney secured set one for the Tigers, 25-22.

The teams traded blows till midway through the second set, when Hall took matters into her own hands. Great play at the net by Hall, who had an unassisted kill followed with a block the next point, gave Har-Ber a 17-15 lead.

"I'm so proud of Korlynn,"Loyd said. "This is her first year on varsity, and tonight she put the team on her back. She found the floor. There were times she had six hands in front of her but she didn't play scared and didn't ever take a rep off. She was busting her butt off of the block, getting in transition and her having that kind of energy and momentum really took us over the top."

She was just getting started. Hall closed the set with three more kills and another block, leading the Lady Wildcats to a 25-19 advantage.

Hall finished with a game-high 18 kills along with four blocks.

"I just always come out and think that I'm going to do this for my team and put some balls down," Hall said. I came out of the locker room before the game tonight and I was like 'I'm gonna have 10 kills and two blocks' and then I had more than that. I think it's just the mindset."

The third set was all Har-Ber. The Lady Wildcats took a 4-3 lead early and never looked back, holding a 5-to-8 point lead for most of the game before eventually toppling the Tigers 25-17.

In a back-and-forth final set, Bentonville tied the game late 23-23 after a big kill from Reagan Tunnell. Har-Ber scored the next point, then appeared to have a match-ending ace from senior Galatia Andrews, but the officials ruled on the return that the ball hit pole holding up the net. The Lady Wildcats had to recover from their celebration and re-do the point. Har-Ber's Grace Mobley made sure it didn't matter, ending the game with a kill.

"I was proud of them because they thought the game was over, then they had to reset and win the point again," Loyd said.

Andrews was all over the court for the Wildcats defensively, putting up 30 digs.

"Without her, if she doesn't get those balls up, that's an automatic point for them," Har-Ber assistant coach Katie White said. "If we don't have her on the court, we don't win that game."

Brooklyn Ware and Mobley had 12 and 11 kills for Har-Ber, respectively.

Madi Hooper hammered 12 kills for Bentonville, helped by Cranney's 20 assists. Ella Aprea had 26 digs for the Tigers, while Victoria Otter put up six blocks. Maddie Lee had a double-double with 11 kills and 20 digs.

Ryan Russell led the Lady Saints attack with seven kills as Shiloh Christian rolled to a 25-15, 25-10, 25-7. win over Clarksville.

Brooklynn Weaver finished with a team-high 13 kills and four blocks as the Lady Mounties fell in five sets at Carl Junction Mo. on Monday.