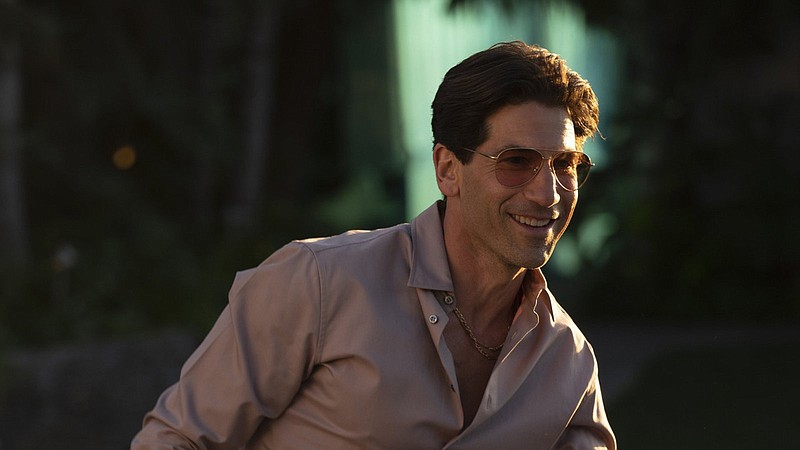 Jon Bernthal plays Julian Kaye, the role played by Richard Gere in the 1980 film version of “American Gigolo.” The new TV series is somehow a prequel and a sequel, if you don’t scrutinize the timeline too carefully. (Showtime/TNS/Justin Lubin)

Early in the first episode of Showtime's "American Gigolo," we get a montage: Tanned abs, vintage sports car, a man's arm around a woman's waist, his sport coat flung over one shoulder. And sex. Lots of sex. It's all set to Debbie Harry singing "Call Me," the song written for and made famous by the original "American Gigolo," Paul Schrader's skuzzy Los Angeles crime story overlaid with a glossy sheen from 1980, starring a wardrobe by Giorgio Armani and the guy wearing it: a swaggering Richard Gere.

That montage (which the opening credits mirror in subsequent episodes) is a nod to the mood and visual aesthetics of the original. And yet it all feels so very expected. Boring, even.

But perhaps you're willing to overlook that because Jon Bernthal is here — in the Gere role — to pique your interest. I have some bad news about that as well. Bernthal isn't your typical leading man, which has been key to his career-long appeal. His looks suggest not a movie star but a guy from the neighborhood, with a nose that has seen a few fights. There's a sense of danger — and humor — in the way he carries himself in most roles. Not here.

The character now has a backstory: Growing up poor in the California desert with a single mom, the mom eventually sells him off to a sex trafficker. That would be Madame Olga, whose elegant facade and swanky beachfront property (and insistence on keeping everything high-toned by speaking in French) cannot mask her nasty, brutal, exploitative operation. The boy, Johnny, is renamed Julian and that becomes his double identity: Johnny's the real person inside, Julian is the role he plays when he's out in the world among people he doesn't entirely trust. Which is almost everyone.

In the three episodes provided to critics, the timeline moves forward and backward, over and over, between Julian's past and his present, in a strained attempt to bring a sense of depth to what is ultimately a shallow story. Framed for the gruesome murder of a young woman, he has been in prison for 15 years. And then one day, he's abruptly informed by a hardened and dogged cop (Rosie O'Donnell) that whoops, it was a wrongful conviction: You're a free man.

This premise makes the series somehow both a prequel (the flashbacks to his childhood) and a quasi-sequel (the original ended with him in prison) if you don't scrutinize the nonsensical timeline too carefully.

Unexpectedly sprung from his prison sentence and adrift in L.A., Julian has few ideas about what to do next, except to find out who set him up — and why. There's a woman from years back with whom he has a genuine connection, but unlike the Lauren Hutton role in the film (cool and assured — and taken off guard by this man's allure) the character, as played by Gretchen Mol, has been flattened and re-imagined as a frantic woman trapped in an ominous marriage.

Comparisons are inevitable. I don't care much for the original movie either, but I appreciate its memorably stylish, gorgeous-ugly cachet. And Gere embodied something elusive, or what Schrader has called a "reptile mysteriousness." In other roles, Bernthal has displayed his own brand of magnetism and sex appeal, but that's absent here. Who knows if this is intentional or not. Bernthal's performance is just there — he's not vulnerable or cocky enough to pull off either side of this enigmatic character.

"Julian was not as gay as he would be today. At the time, we thought we were being brave, promoting this androgynous male entitlement," Schrader has said of his film. "Now I look back, and we were being cowardly. It should've been much more gay." The show, however — at least what I've seen so far — doesn't deviate from the movie's approach. Misogyny though? Plenty of it.

Behind the scenes on the series, all has not been well. Producer/director/writer/creator David Hollander was let go midway through filming "following an investigation into allegations of misconduct" according to reports.

In his own time, Bernthal is also the host of a podcast. He recently featured a sympathetic conversation with actor Shia LaBeouf in what some might interpret as the latter's attempt at image rehabilitation ahead of a lawsuit set to go to court in the spring, in which LaBeouf's ex-girlfriend alleges he inflicted emotional distress and assaulted her.

There's a dark irony here. "American Gigolo" is largely about abuse. Depending on how you look at it, the show's star is either earnestly trying to understand why terrible and destructive behaviors happen, or giving a friend a softball interview that centers on LaBeouf's own pain and troubles over those who he allegedly harmed.

What would Julian make of that, I wonder?