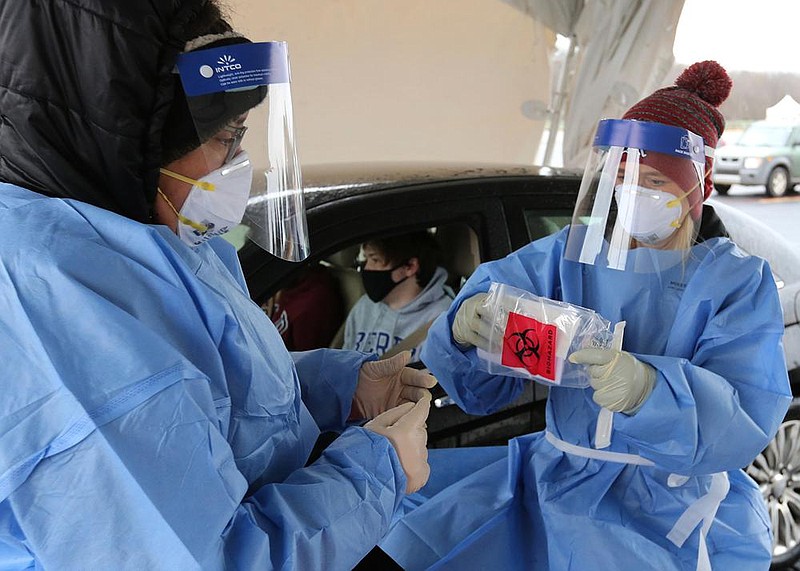 Medical personnel prepare a covid-19 test for Trey Berry, a junior at the University of Arkansas, Fayetteville, in this Jan. 6, 2021 file photo. The testing was part of a drive-up testing clinic hosted by the Arkansas Department of Health in the parking lot across from Baum-Walker Stadium at the corner of Razorback Road and 15th Street in Fayetteville. (NWA Democrat-Gazette/David Gottschalk)

Arkansas' count of active, or currently infectious, cases of covid-19 continued to decline Thursday, falling to the lowest level since June 22.

With recoveries outpacing new cases, the number of cases in the state that were considered active fell by 379, to 9,217. It was the lowest count reported by the Arkansas Department of Health in more than 12 weeks.

However, the state's death toll from the virus, as tracked by the state Health Department, rose by seven, to 11,977.

After rising by double digits the previous two days, the number of people hospitalized with covid-19 in Arkansas fell Thursday by nine, offsetting part of that increase.

The count had hit a two-month low of 258 on Monday, then rose by a total of 28 over the next two days before falling Thursday to 277.

The state's count of cases rose by 845 — down by 174 compared to the increase on Wednesday, and down by 298 from the increase the previous Thursday.

Dropping for the second consecutive day, the average daily increase in the state's covid-19 case count over a rolling seven-day period fell to 750, which was down from an average of 797 new cases a day the previous week.

After not changing the previous two days, the number of the state's virus patients who were in intensive care fell Thursday by six, to 49.

The number of those patients on ventilators, which fell by two on Wednesday, remained Thursday at 16.

Since the pandemic reached Arkansas in March 2020, the state Health Department has reported 944,789 cases of the coronavirus. Of those, 923,347 are considered recovered.