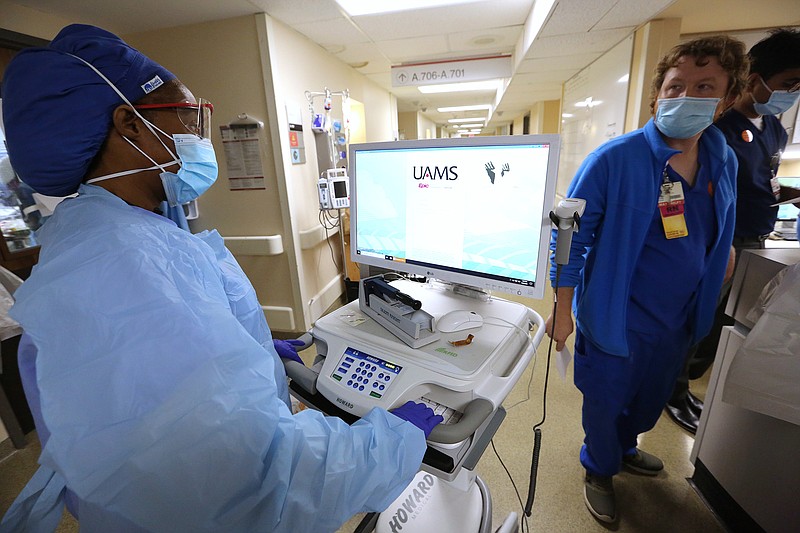 Nurse Takela Gardner heads to a Covid-19 patient's room in one of the Covid wards at University of Arkansas for Medical Science on Thursday, July 22, 2021, in Little Rock. .(Arkansas Democrat-Gazette/Thomas Metthe)

Despite a continued decline in Arkansas' active, or currently infectious, coronavirus cases, the number of people hospitalized in the state with covid-19 jumped Wednesday by double digits for the second day in a row.

The state's death toll from the virus, as tracked by the Department of Health, rose by six, to 11,970.

Two of the deaths reported occurred in February, she said, and the other four were from July.

Two days after hitting a two-month low of 258, the number of covid-19 patients in Arkansas' hospitals rose Wednesday by 10, to 286, its highest level since Sept. 2.

Already at its lowest level since June 24, however, the number of cases in the state that were considered active fell by 56, to 9,596, as recoveries outpaced new cases.

McNeill said Tuesday that it was "difficult to pinpoint the reason for the jump" in hospitalized patients that day.

She noted that hospitalizations have tended to increase early in the week before tapering off.

"We will have to see what happens in the next few days," McNeill said.

During a summer surge of infections, powered by new versions of the omicron variant, the highest the active case total reached was 16,946 on July 20.

State Epidemiologist Mike Cima said Monday that an increased rate of infections among children that had driven a slight uptick in the state's overall new case numbers appeared to peak around Labor Day.

Since then, the state's new case numbers appear to have resumed their decline, health officials have said.

While larger by 178 than the increase on Tuesday, it was down by 23 compared with the rise the previous Wednesday.

After rising on Tuesday, the average daily increase in the state's case count over a rolling seven-day period fell Wednesday to 792, which was down from an average of 823 a day the previous week.

Pulaski County had the most new cases, 125, on Wednesday, followed by Jefferson and Washington counties, which each had 68, and Faulkner County, which had 60.

The number of the state's virus patients who were in intensive care, which rose by eight on Monday, remained for a third day on Wednesday at 55.

The number on ventilators, which rose the previous two days, fell Wednesday by two, to 16.

At its hospitals in Little Rock and Springdale, Arkansas Children's had 14 covid-19 patients on Wednesday, up from 13 on Tuesday but still down from 20 the previous Wednesday, spokeswoman Hilary DeMillo said.

The University of Arkansas for Medical Sciences Medical Center in Little Rock had 16 covid-19 patients on Wednesday, up from 11 a week earlier, spokeswoman Leslie Taylor said.

"We did have one death over the last week, too," Taylor said.

She said the patients on Wednesday included two who were in intensive care and one who was on a ventilator.

Ten of the 16 patients had been fully vaccinated, Taylor said. She said she didn't have information on how many had received booster shots.

The number of UAMS' employees and students who were not cleared to be on campus for reasons related to covid-19 had also risen in the past week, going from 85 to 112, Taylor said.

Meanwhile, she said the hospital had received an initial supply of updated Pfizer vaccine that was recently authorized by federal regulators for use as booster shots and planned to begin administering them to employees today.

The boosters will also be available at UAMS clinics, Taylor said.