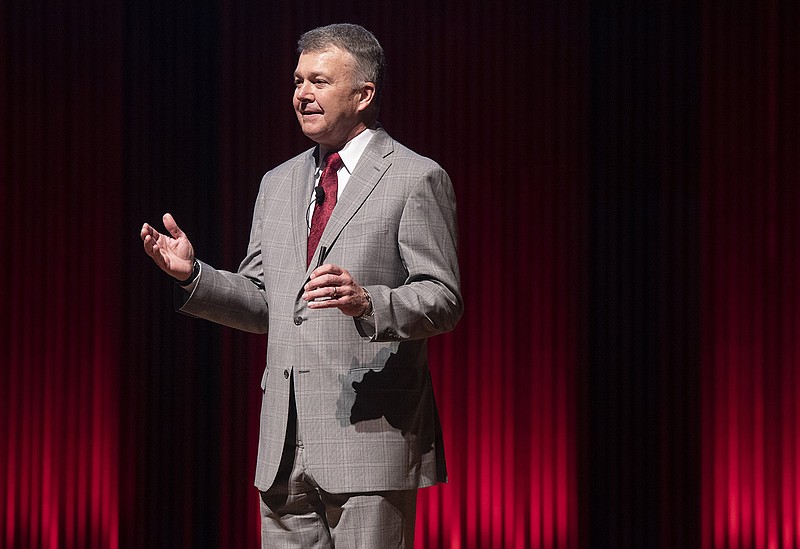 University of Arkansas chancellor finalist Jay Akridge speaks Wednesday during the second in a series of forums for candidates for the job of chancellor at the Faulkner Performing Arts Center on the university campus in Fayetteville. (NWA Democrat-Gazette/J.T. Wampler)

If Jay T. Akridge is selected as the new chancellor of the University of Arkansas, Fayetteville, he will spend his first six months doing "a lot of listening."

He said he would want to learn "what are your dreams and aspirations for the University of Arkansas?

"I'm not going to fly in and tell you what to do," especially considering the university is already a "place with a lot of momentum, [so] I'll take the pulse, then get moving, because the world is moving fast," Akridge told those in attendance Wednesday at the Jim & Joyce Faulkner Performing Arts Center and those live streaming a public forum about his candidacy. "I'm not out applying for other jobs -- this is the only job I've applied for -- and I'm excited about this opportunity."

Akridge's visit to campus Wednesday included meeting with students, faculty, staff and university stakeholders, as well as the campus forum.

The same plan is being followed for each finalist.

Daniel A. Reed, presidential professor of computational science at the University of Utah, will have his Friday, and Cynthia Y. Young, founding dean of the College of Sciences at Clemson University, who would be the first female chancellor of the University of Arkansas, Fayetteville, if selected, has her forum Monday.

More information on each finalist, as well as additional details regarding each candidate's public forum, is available on the chancellor search website at: https://chancellor.uark.edu/chancellor-search/.

Questioning the value of college has become a "narrative" in some quarters, and those who could benefit the most from a college education -- minorities, those from rural and/or impoverished backgrounds, and those who would be first in their family to graduate college -- are in many cases most susceptible to the specious notion that college isn't a worthwhile investment, but "college is worth your time and money," said Akridge, currently provost and executive vice president for academic affairs at Purdue University.

As one climbs the ladder of education, from high school up to, potentially, a doctorate, average earnings increase, while the unemployment rate decreases, so "the economics are pretty clear," and Purdue has kept tuition flat for a decade, in part to encourage college attendance.

Akridge leads the academic enterprise of Purdue with a total budget of approximately $1.8 billion. As provost, he has led the university's enrollment growth initiative, expanding undergraduate enrollment from 31,000 in 2017 to nearly 38,000 in 2022, according to the University of Arkansas System. He was also Purdue's dean of agriculture for more than eight years.

Purdue actually grew faster than planned, reaching 38,000 students this year instead of in 2027-28 as planned, which meant "we hired a lot of faculty this year," he said. "You take your best shot at where you think it's going, and we did not want to let the student experience erode, because that's not good."

'STAND OUT IN A CROWDED FIELD'

It's imperative for the University of Arkansas to not only sell students on the value of a college education, but recruit them to the university, and that's accomplished by providing something "unique to stand out in a crowded field," said Akridge, who has a bachelor's degree in agriculture and business administration from Murray State University, and his master's degree and doctorate in agriculture economics from Purdue.

"You want to be one of those places seen as creating value for students."

What occurs at the UA-Fayetteville, a land-grant university, ought not remain there, but, rather, spread throughout the state to improve communities, and "that's a recipe for relevance today," he said. Universities must continue "to be in tune" with skills required by industry and expand research, as "companies want to invest in places doing the best work."

UA-Fayetteville already "brings the arts and STEM together to create a better world," and the university ought to continue that investment, as it's differentiating, he said. Faculty and staff should be supported with leadership development, career counseling, and recognitions and awards.

Among those to ask a question during the question-and-answer portion of Wednesday's forum was Anthony DiNicola, who was curious about safety and inclusion for members of the LGBTQ community on campus.

"I deal with it every day, students who are afraid to be fully open" on campus, said DiNicola, coordinator of cultural communities in the university's Center for Multicultural and Diversity Education. He's concerned about these issues "not just for students, but for myself," as DiNicola identifies as a "queer" individual.

"Purdue has one of the best LGBTQ centers in the country," and land-grant universities mean "accessibility for everyone," Akridge said. "Everyone is welcome, and they're all Razorbacks."

Akridge is co-leader of the Equity Task Force at Purdue, focused on enhancing the representation, experience and success of Black Boilermakers, and he's worked to make the hiring process for faculty and staff "as inclusive as possible," he said. "We've had about a 20 percent increase in Black faculty this year and hope to have another 20 percent next year."

"I like that Purdue is willing to say 'Black Boilermakers,' and put resources and energy behind" an initiative to attract more Black students, faculty and staff to campus and help them thrive there, DiNicola said. "I want all of our institutions to do that" for underrepresented minority groups.

"Diversity is fundamental to our success as higher education institutions, [as] diverse perspectives create new ideas, [and] if they find a home here, good things happen," Akridge said. "Belonging activities, mentoring, and celebrating excellence" are all crucial, and "we want everyone to know this is a place they want to be."

Student success is paramount, and universities need to accept some culpability for students who don't graduate, Akridge said. "If they don't graduate, some of that is on us, because we brought them [to campus believing] they could succeed."

Akridge is interested in why students succeed or fail, as learning those lessons leads to better outcomes, he said. He believes in always asking "Why?" Saying "'because that's the way we've always done it' doesn't always mean that's the best way."

Being viewed as a destination university will be increasingly critical as higher education faces an "enrollment cliff" beginning in roughly 2026, he said. A national decline in birth rates that began earlier this century will begin to affect higher education, with about 15% fewer students concluding high school and potentially starting college.

"The enrollment cliff is real, and it's a big deal," he said, adding that the enrollment cliff also affects current plans, even as universities like Arkansas and Purdue absorb growing enrollment. With enrollment growth, "housing becomes a fundamental issue, especially with first-year students, who do much better if they live on campus, and if you don't have enough on-campus housing, you have to go out into apartments in the community, which creates a ripple effect," he said. "There's also sports and health facilities; if they get too busy, students have to wait."

However, universities with growing enrollment in the short term need to balance that with the pending enrollment cliff in a few years, he said. "You don't want to build new residence halls," among other facilities, and "end up with infrastructure you don't need." 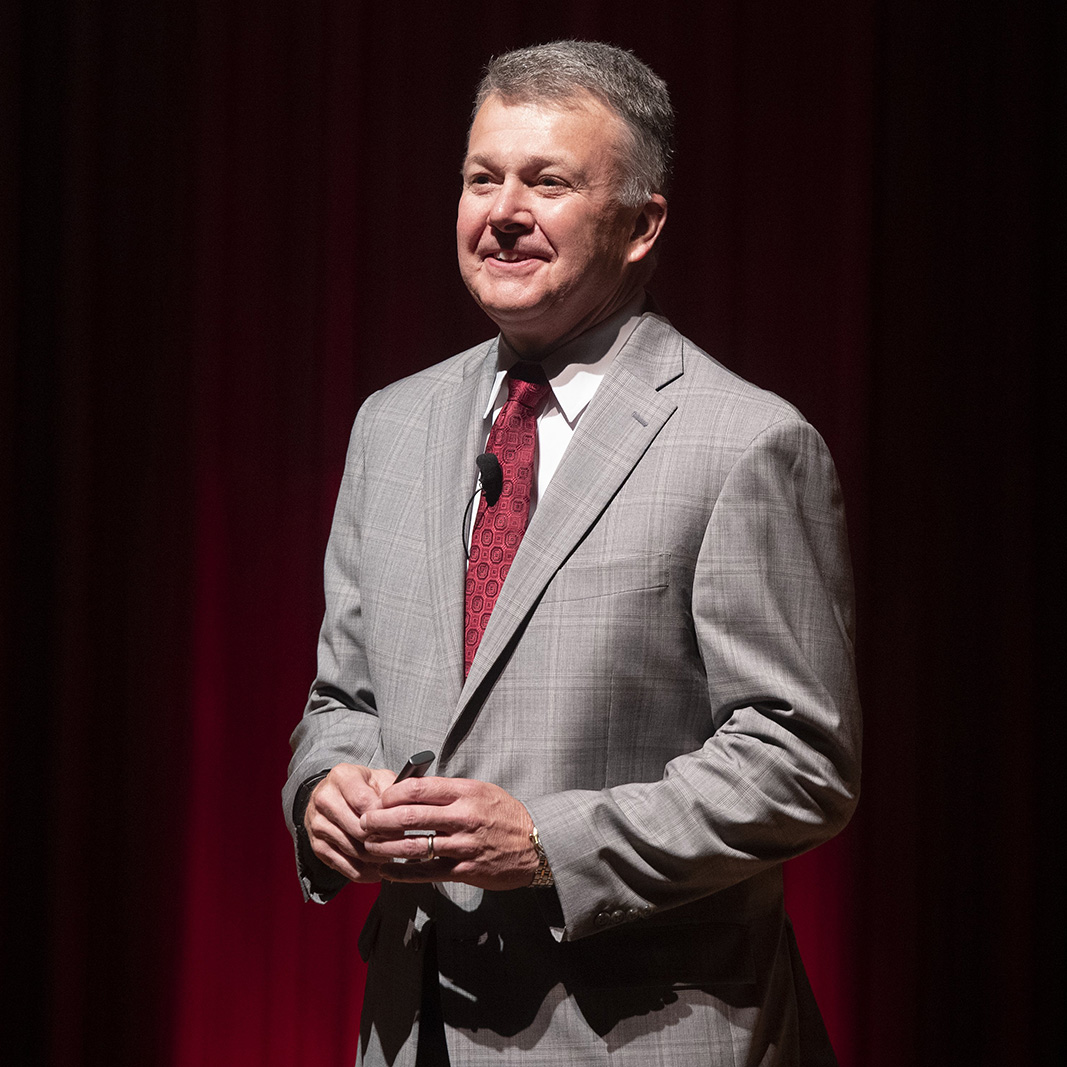 Jay Akridge, a University of Arkansas chancellor finalist, speaks Wednesday during a forum at the Faulkner Performing Arts Center on the university campus in Fayetteville. (NWA Democrat-Gazette/J.T. Wampler)