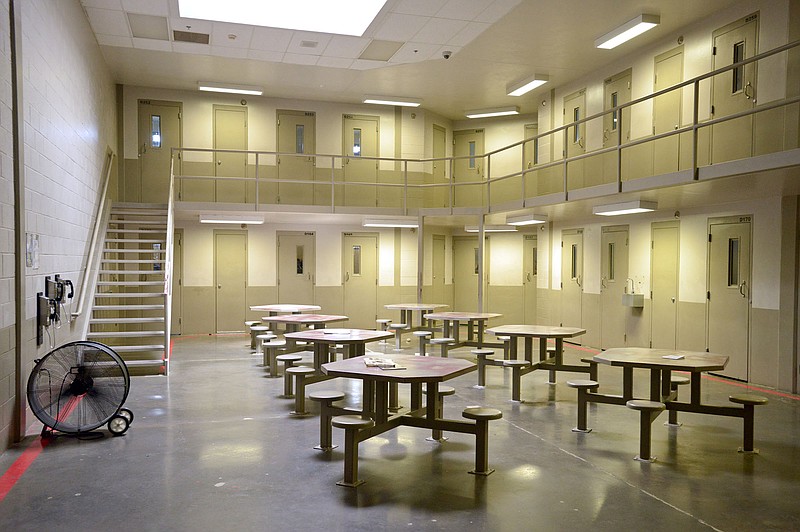 A view of a cell block at the Benton County Jail on Thursday July 30, 2015 in Bentonville. (NWA Democrat-Gazette/BEN GOFF)

"I am thankful the mayors of our great communities have recognized the importance of preserving our quality of life here in Benton County, and ensuring the safety of our families in the future," said Benton County Sheriff Shawn Holloway.

The council recognizes Benton County's continual population growth has put a strain on the criminal justice system and has led to crowding of the current jail, according to a news release. An expansion is needed to provide adequate facilities for the future population of Benton County, increase mental health assessment, and provide drug and alcohol rehabilitation programs among other improvements, a news release states.

Benton County Judge Barry Moehring said passage of the resolution is a resounding message to county residents the mayors and police departments support the role a safe, right-sized and well-run jail plays in ensuring public safety and protecting the quality of life.

"This expansion of the jail is critical to the safety of Rogers residents and of Benton County as a whole," said Rogers Mayor Greg Hines. "I saw firsthand the need to expand the facility and ensure the safety of our community. I support this expansion and believe it will provide sufficient space to protect the public."

The sales tax measures will be on the Nov. 8 ballot.

Holloway previously said the expansion is necessary to deal with crowding issues in the jail.

A county criminal justice committee recommended earlier this year nearly $250 million be spent on a jail expansion and a courts complex.

Money from the one-eighth percent increase would pay off the bonds to finance the jail expansion. The tax will end when the bonds are paid.

The one-quarter percent increase, which would pay for jail operations, would be a permanent tax.

The ballot measures will only concern expanding the jail because justices of the peace plan to pay for the courts project with county money. The estimated budget for the jail expansion project is $206.2 million.

"I am grateful that the mayors in Benton County unanimously recognized the need to prioritize public safety," said Benton County Prosecuting Attorney Nathan Smith. "For our community to remain one of the best places in America to live, work and raise a family, we must invest in the infrastructure we need to keep criminals off our streets."

Bella Vista Mayor Peter Christie said the additional space and increased funds into inmate rehabilitation are critical to continuing to keep the area one of the safest in the country.

The Arkansas Justice Reform Coalition has called for a moratorium on any new jail beds in both Benton and Washington counties, arguing alternatives to incarceration have yet to be explored by either county and should take precedence over bigger jails.

Sarah Moore of the coalition said additional sales taxes on the communities is unwarranted for jail expansion. She said people across all walks of life are coming together to oppose the tax increases.