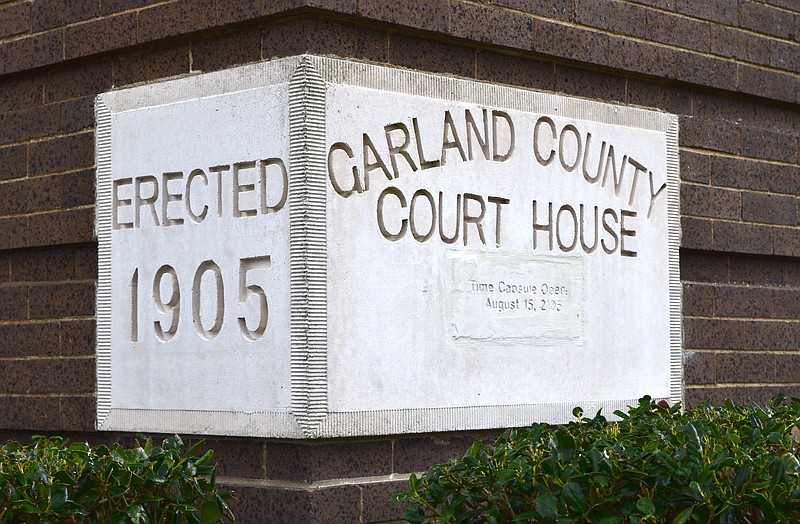 The exterior of the Garland County Court House. - File photo by Donald Cross of The Sentinel-Record

The ordinance appropriating $604,342 for the general fund put the county at the $10 million limit for revenue replacement, federal pandemic relief the U.S. Department of Treasury rules exempt from federal procurement policies.

"You try to get something done right now and have to use federal and state guidelines, you're not even going to get anybody to bid on it," he said.

"That's the finish of our revenue replacement," Mahoney told the quorum court. "We didn't have enough salaries to finish it when we did it the last time, so that's the remainder of what's left to supplant those salaries. It's all in the general fund now, but none of it is still subject to federal procurement guidelines."

The final rule issued earlier this year allows local governments to claim a standard allowance of up to $10 million in lost revenue that can be spent on government services, including road building and maintenance, health services, government administration, police, fire and other public safety services.

The 2022 general fund budget forecast $23.7 million in revenue, 7.4% and 9.5% more than the 2021 and 2020 budgets' revenue projections, but the Treasury Department said the standard allowance was based on "average revenue loss across states and localities." The county opted for the standard allowance in lieu of the four-step lost revenue formula.

• A $394,606 appropriation of Coronavirus Aid, Relief and Economic Security Act funding to build the county's portion of the Southwest Trail, the 60-mile bicycle and pedestrian corridor that will connect the downtowns of Hot Springs and Little Rock.

The money will pay the $250,000 match for the $1 million U.S. Department of Commerce Economic Development Administration grant the county was awarded earlier this year. The West Central Arkansas Planning and Development District, which applied for the grant on the county's behalf, said the Commerce Department used American Rescue Plan money to fund the competitive grant program.

The $394,606 appropriation included $144,606 to acquire right of way for the trail. According to a summary of treasury accounts balances, the county's $2.35 million CARES Act allocation had a $1.5 million cash balance at the end of last month.

• An $8,007 appropriation from the detention center facility fund to pay the remainder of the peer recovery specialist's 2022 salary. The position is funded by a grant that expires at the end of the month. The quorum court's human resources committee made it a county-funded position last month.

• A $183,914 appropriation from the county library fund for a new roof. Mahoney told the quorum court most of the library's original roof from the early 1990s has yet to be replaced.

• Resolutions reappointing Dave Munford to another five-year term on the Lake Catherine Waterworks and Sewer Facilities Board and appointing Steve Cull to serve the remainder of an unexpired term. The nonprofit board oversees Riviera Utilities, which provides water and wastewater services for the Diamondhead community.

• A resolution allowing the county to use the National Association of State Procurement in lieu of competitive bidding. NASPO will be added to the list of cooperative purchasing programs the quorum court authorized the county to use earlier this year.

The list is approved annually. Garland County Attorney John Howard told justices of the peace the resolution also allows the county to use other cooperative purchasing programs until an updated list is presented to the quorum court next year.